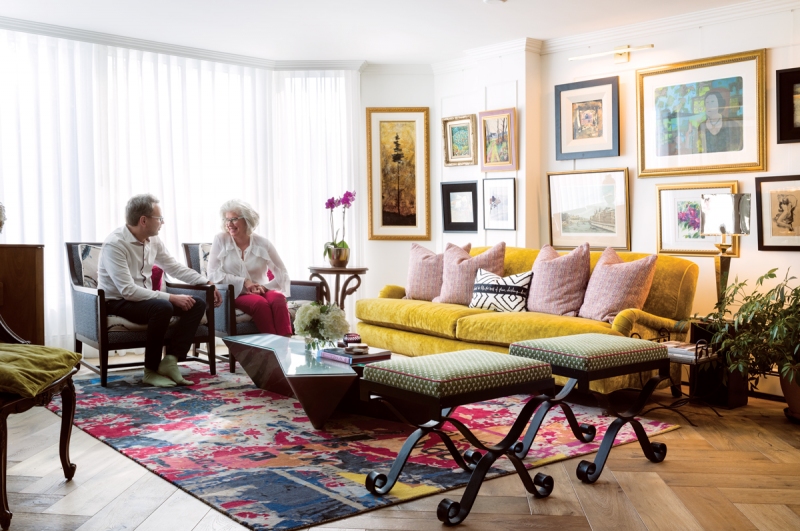 Fate seemed to intervene when Penny Dyte and Bruno Masquillier set out to find a home together. As the couple began looking for a space to share their lives, Dyte noticed a unit for sale in a building on Memorial Drive that she had long admired. “I would drive by and [think] how wonderful and elegant it would be to live on Memorial Drive,” says Dyte. After viewing the unit for sale, the couple decided to pay a visit to some family friends of Masquillier’s that also lived in the building. As it so happened, this couple had been considering selling their place, a serendipitous turn that resulted in Dyte and Masquillier acquiring the unit in late 2016.

Though the exterior of the building had initially drawn them in, Dyte and Masquillier were less taken with the interior of the unit and proceeded with plans for a full-scale renovation. The couple hired Upkeep Group to be the contractor. Upkeep (since renamed Unique Projects) suggested they also work with designer LeAnne Bunnell, principal at LeAnne Bunnell Interiors, on account of the scope of the project. While some walls remained in place, the interior was almost completely gutted. The extensive redevelopment and redesign included everything from making the kitchen brighter to removing the popcorn ceilings. “There’s not a surface that hasn’t been touched,” says Bunnell.

One challenge was that the condo’s concrete ceilings and floors meant all plumbing and light fixtures had to stay where they were. Another big challenge was one that faces many homeowners – combining two design sensibilities and lots of belongings into a smaller home. Dyte is a frequent traveller and an art lover born in Alberta. Masquillier is French, and moved from Paris to Calgary with his family in 1997. “We had two homes, two basements, two bunches of storage, two garages and we came from two different worlds,” says Dyte. “Bruno had brought a lot of furniture from France and had his art and books and I was more contemporary and had my art and books. We had to blend these lives.”

Bunnell and the couple worked together to combine the styles into a home that is warm and colourful. The design was inspired by the idea of the Parisian apartment with elements such as herringbone French oak floors, wooden wall panelling and the juxtaposition of Masquillier’s antiques with Dyte’s contemporary pieces. “There’s a lot of tension that you see throughout [the condo] – a very modern piece of art with a very traditional piece of furniture. That’s what makes it so interesting to be in this space,” says Bunnell. “A lot of little details are reminiscent of Parisian flats. That combination of modern and antique – nobody does that like the Europeans.”

The entryway is an example of how Bunnell helped meld the couple’s individual lives and tastes. Bunnell removed the closet to create more space and added a wall of laser-cut screen panels. The panels were a must for Dyte – in combination with the orange door they reference her love for the Parker Palm Springs hotel. Bunnell then finished the entryway with Masquillier’s palm-frond chandelier, a flea market purchase from France. “[It’s] a little whimsical touch. That’s one thing that I love about this house – it’s very happy,” says Bunnell. “It’s joyful, it’s whimsical. There’s love in this home. It’s tangible when you walk in.”

For Dyte and Masquillier, the new condo truly does feel like home – from the ability to steal out for an early morning walk in Prince’s Island Park, to seeing the pieces of their individual lives combined into one whole.

The couple’s art collection is extensive, and includes everything from family heirlooms, to flea-market treasures, to work by local artists. The art is hung using a picture rail, which is a system for displaying multiple pieces without having nails in the wall for each.

Tips for keeping a renovation on track

Designer LeAnne Bunnell is well versed in the art of renovation – and in the inevitable roadblocks that can arise over the course of every project. Here are some of her top tips when it comes to re-doing your home:

1. A smaller room does not mean a smaller budget. “There are minimum costs and schedules related to scope of work regardless of square footage.”

2. Consider resale potential. “Choose classic finishes if you are planning on a move in the near future.”

3. Don’t get discouraged when something unexpected happens, and try to embrace the new direction instead. “Sometimes unanticipated site conditions or unplanned discoveries lead to revisions that allow for a more meaningful result.”

4. Less is more when it comes to other people’s opinions. “At the end of the day, it’s you who lives there.”

5. And have some fun! “A good dose of perspective and a sense of humour goes a long way to smoothing out the bumps.”

The laser-cut wall panels in the entryway allow more light into the main living area while creating a beautiful entrance to the home.

The room the couple refers to as the petit salon features one of two wood-burning fireplaces in the condo.

A second wood-burning fireplace is in the room the homeowners call the grand salon, with adjacent firewood nooks for both form and function.

The pullout counter was added to create additional cooking space. Some of the cabinets feature a custom red lacquer, while one cabinet was decorated with a custom-printed wallpaper image of Jan Davidsz de Heem’s “Vase of Flowers” (c. 1660).

It was Masquillier who got to decide the height for the quartzite-topped kitchen island. According to Dyte, Masquillier’s homemade confiture is so good, it’s worth the height of the island.

The plumbing was set in the concrete floors so none of it could be moved. In order to add the bathtub, contractor Upkeep built a platform and put the plumbing underneath. It was thanks to a hardworking supplier (and a stroke of luck) that the homeowners ended up with their choice of tile. “When we went to order [the tiles] they were out of stock,” says Bunnell. “We called our supplier Saltillo, who called the factory in Turkey. The [factory] stopped their run of tiles, poured this tile for us, and was able to get it on the next shipment to Canada.”