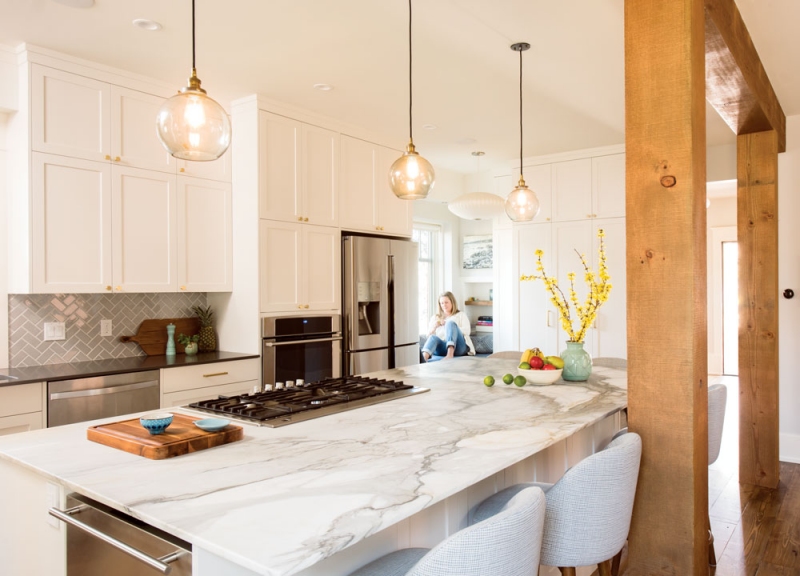 How do you transform the main floor of one of Calgary’s Century Homes into a modern and functional space, without sacrificing the integrity of its heritage?

Calgary interior designer Angela Sayers of Red Brick Studio kept that question top-of-mind as she and her husband, Chris, renovated the 1,000-square-foot main floor of their brick-and-sandstone house in Inglewood with the help of A & R Associates Ltd. The result is a beautiful and welcoming new space that melds contemporary updates and accents with timeless elements that speak to the home’s history. What’s more, the main living area now blends seamlessly with the upstairs (renovated in 2007) and the basement (developed in 2011).

When the Sayers purchased the home in 2001, they didn’t yet have a vision for its future, but they were in love with its past. The house was built in 1912 by a Canadian Pacific train engineer who had moved to Calgary from Montreal. He wanted a brick house like those in his home city, and he opted for sandstone detailing (a common local building material at the time, now an icon of early Calgary architecture) above and below the windows. The house was also supposedly the first home in town with a flush toilet.

“We loved the history of it,” says Angela.

When earlier renovations by previous owners proved cheap and dirty (the master bathroom began to “fall apart”), and after the birth of the couple’s daughter in 2005, the Sayers knew it was time to update the home’s interior. They saved the most difficult renovation for last.

“We always knew we would get to it, but it felt overwhelming,” says Angela. “The kitchen wasn’t functional for how people live today – it needed to be opened up.”

Beyond the tiny kitchen, other aspects of the main floor weren’t working. The entryway lacked a closet, and the parlour – historically used for “receiving guests” – had become an underutilized space adjacent to the kitchen; it was too small to be a dining room, but it didn’t work as an office, either. The ground level was also dark, a result of insufficient lighting, closed-off rooms, dark wood floors and trim and the home’s north-facing orientation.

“We spent at least a month trying to figure out a new layout,” says Chris. They often hunkered down at The Nash to sketch ideas and mark up drawings. After consulting with a structural engineer, the couple arrived at a plan: two walls would come down and a reclaimed fir support beam and two posts would go up to create an open kitchen and dining room (R.I.P. parlour), perfect for entertaining.

On the outside, this brick-and-sandstone beauty reflects the historic neighbourhood where it has stood for more than 100 years. On the inside, it reflects a modern aspect of Inglewood – the people.

They also like the work of Inglewood artists, and the couple shows their support by decorating the walls of their home with paintings that are as eclectic and varied as the neighbourhood itself. A magpie painting by local artist Karen Bray hangs in the dining room, while a still life of a bowl of cherries by Inglewood Community Association president Sara Poldaas decorates the reading nook. An abstract by Inglewood resident Mieka West adorns a wall in the living room.

Chris, who dabbles in photography, has added his own pictures of the neighbourhood into the mix, including a filtered image of Swans pub in downtown Inglewood and a pentaptych of five black-and-white prints of old painted signs on brick buildings shot in Inglewood, the East Village and downtown Calgary.

It’s no wonder friends and neighbours, and the Sayers themselves, feel so comfortable in the updated space. “We love our home and are so happy with how it turned out,” says Angela. “We feel like we’ve honoured the age and history of our house while making it functional for a modern family.”

Though the Sayers’ Inglewood house has been redone top to bottom, its heritage still shines through. “I would never have gutted this house and tried to make it modern,” says Angela.

Instead, the couple made sure the architectural bones stayed true to the original home, while relying on spatial configuration, appliances, decor and modern building materials to bring it into the 21st century. “Making the architectural details traditional always works because the body of the house is never changing,” says Chris. “Adding in your own furniture and accessories makes it modern.”

Taking the main floor down to its studs gave the family an opportunity to update the guts – it’s been re-plumbed, rewired and re-insulated. The demolition also uncovered bits of the city’s history tucked away in the rafters, such as 1913 train tickets and copies of the Calgary Daily Herald from 1923.

The end result is a warm, bright and functional space that looks like a natural part of the house, thanks, in part, to Angela’s insistence on replicating original trim that couldn’t be salvaged. The baseboards, casings and mouldings, as well as the five-panel doors, are now painted a warm shade of white to lighten the rooms. The couple also kept the original fir pocket doors that close off the living room as a nod to the past, and as a functional way to attain privacy.

In the kitchen, white millwork is classic Shaker – clean-lined and timeless, and a style that melds traditional with modern. It suits the Sayers’ taste, while also becoming the bridge between 1912 and 2016. The satin brass hardware has the same effect, as do the modern gas lamp-styled pendant lights with their LED Edison bulbs that hang above a statement marble island roughly the size of the old kitchen. Flanked by five comfy upholstered stools, the new kitchen centrepiece invites conversation and cooking, important considerations for the Sayers, who love to entertain.

Mid-century modern furniture, such as a Saarinen-style walnut dining room table and the living room’s Saarinen “womb chair,” mix with a leather sectional and a rustic wood coffee table with a steel frame. Light fixtures throughout contemporize the space, from the drum shade lamp with a brass interior in the living room, to the George Nelson bubble lamp illuminating the kitchen’s cozy nook, where the couple’s 10-year-old daughter spends a lot of time reading. 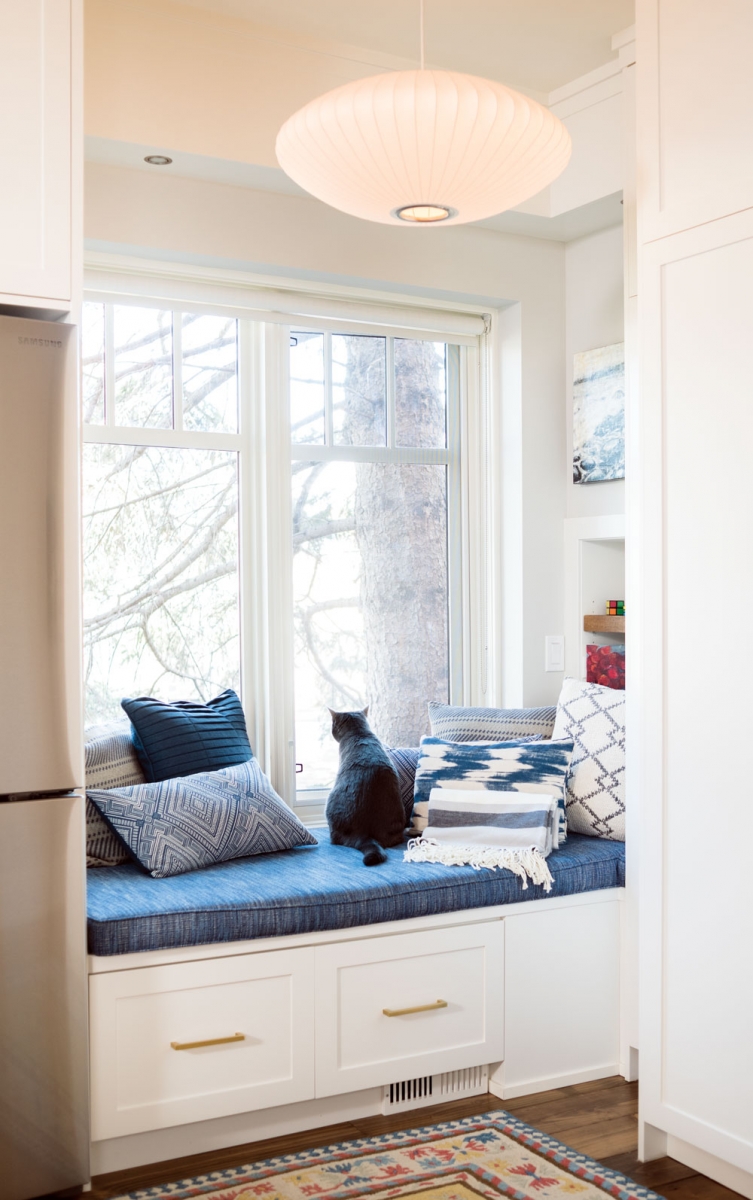 Rain the cat watches the world go by from the kitchen nook. 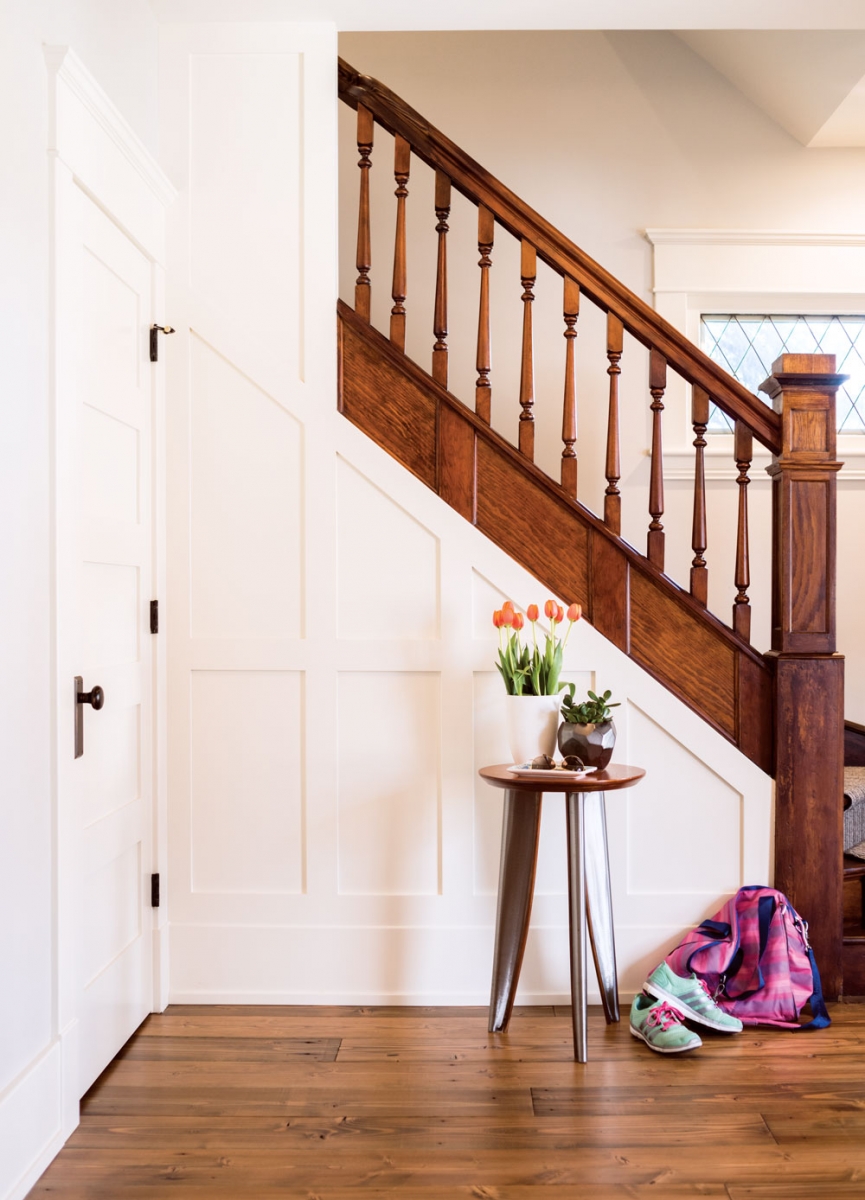 The entryway to the home, complete with a coat closet. 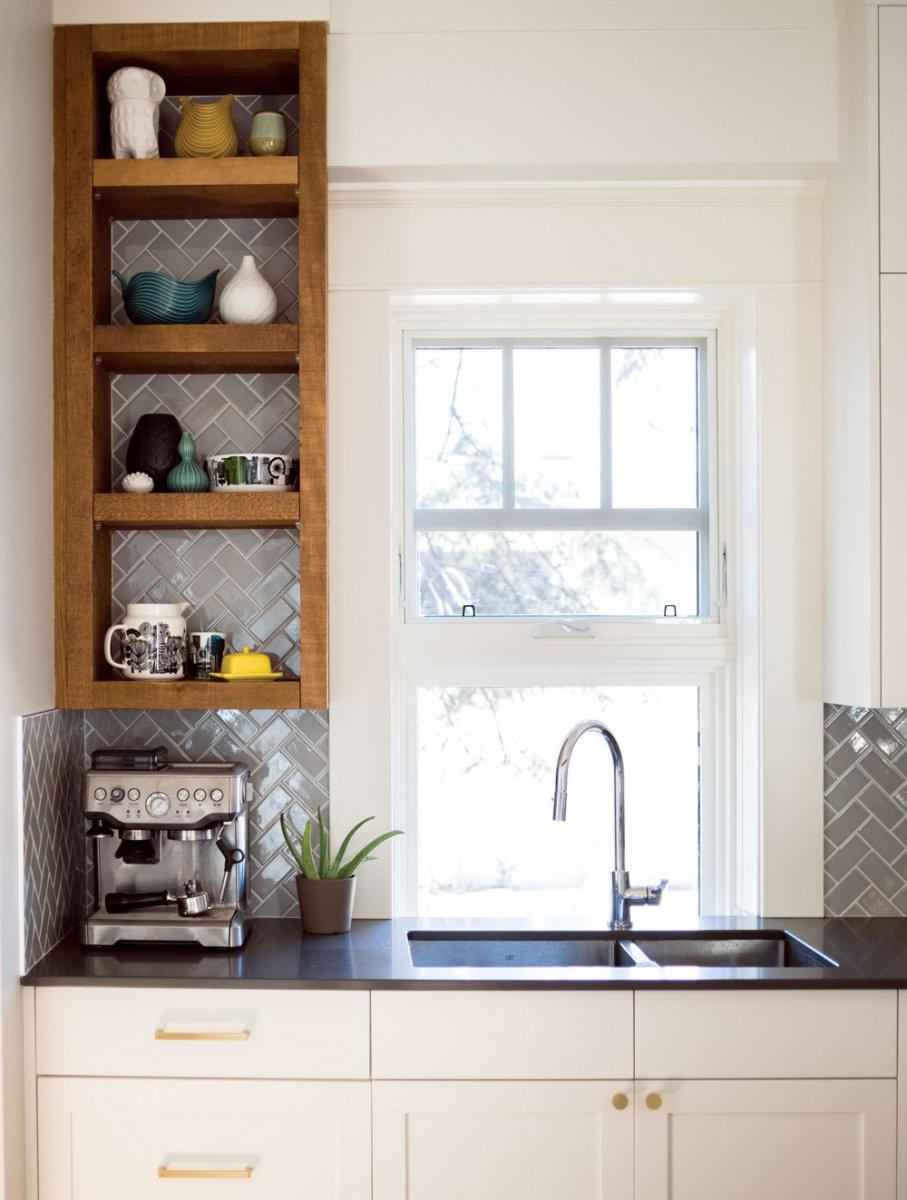 Grey subway tile was set on the diagonal for the kitchen backsplash. 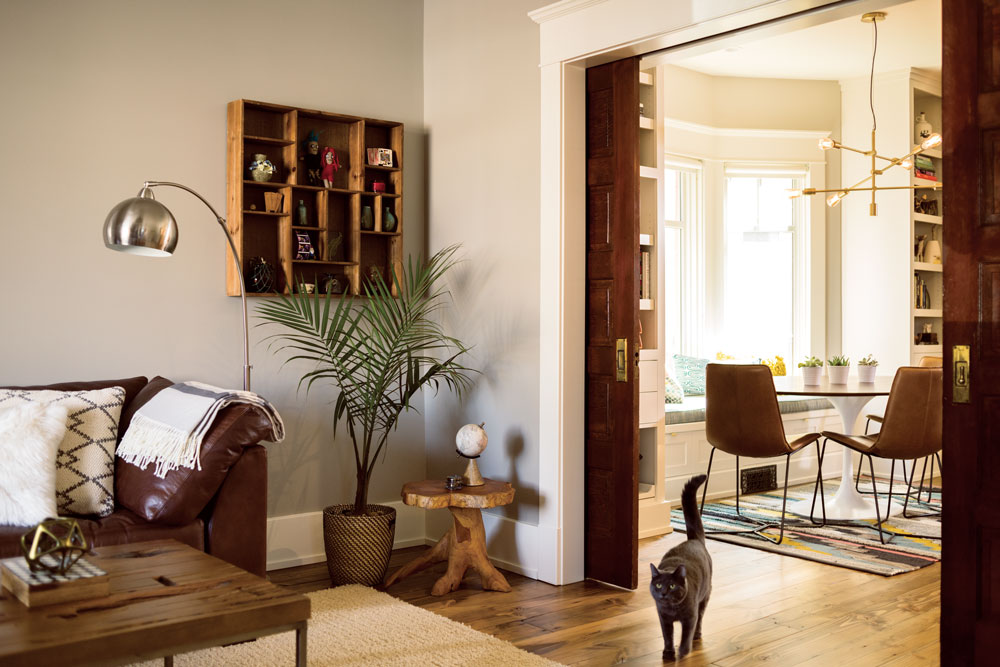 The home’s original pocket doors can be closed to provide privacy in the living room. 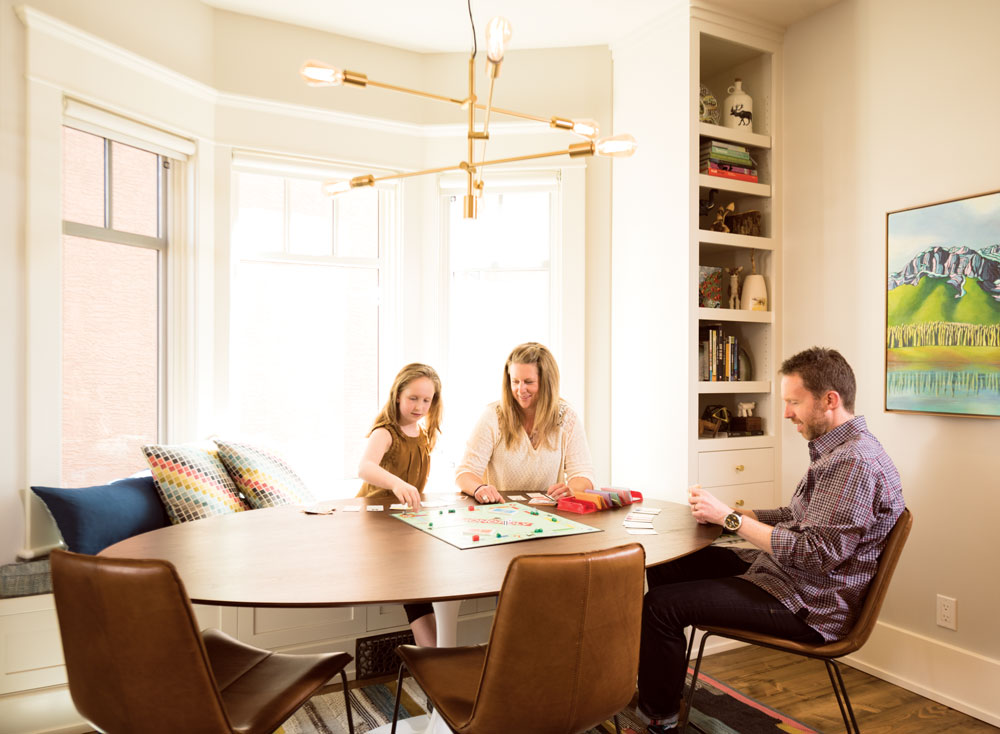 The dining room is more than just a space to eat, it’s also where the family enjoys game night.

Choose finishes and millwork that are timeless and traditional, yet clean-lined

High, but basic baseboards and Shaker-style cabinets, for example, bridge the past with the present.

A traditional metal like brass or bronze with a modern finish like satin is an effective way to combine the genres.

In this home, an antique cabinet was topped with grey quartz and a white undermount sink to make a statement vanity in the powder room.

Modern lamps with LED Edison bulbs, such as the living room’s mobile chandelier, and the grey subway-tile kitchen backsplash, laid in a herringbone pattern, are two great examples.