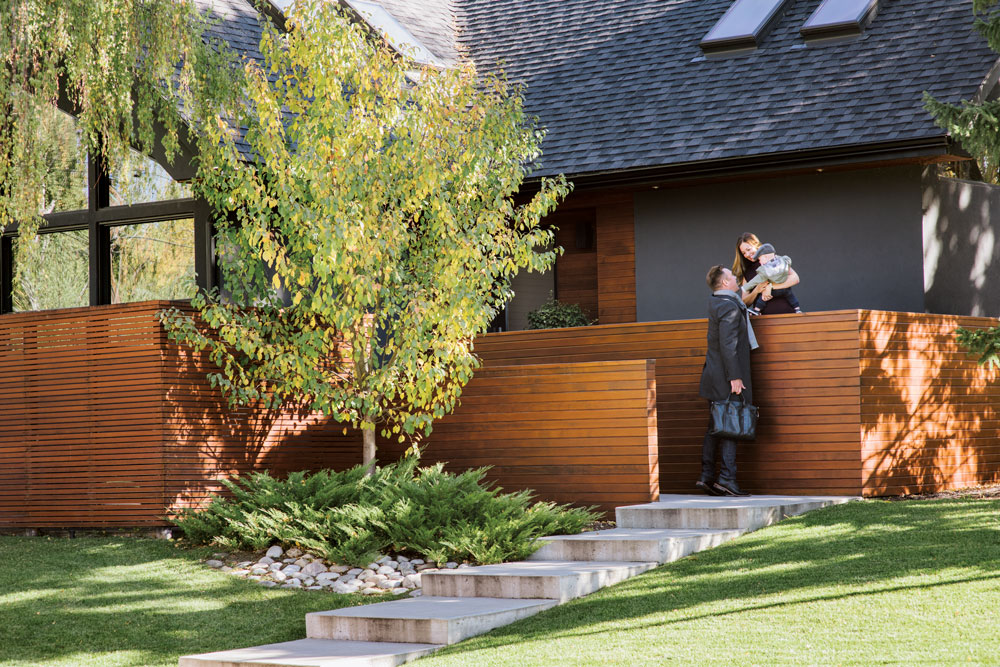 The bold, clean lines and sizeable kitchen island set the stage for Brad and Kelly Morrison’s weekly Sunday suppers, where friends and family gather for conversation and cuisine.

When Kelly and Brad Morrison chanced upon their 1950s bungalow in 2007, they were drawn to the perfectly situated, mature corner lot. But they knew the home had potential, too.

While the couple had dreams of turning the home into a personal project, they didn’t expect it to be a year-and-a-half-long renovation. After spending the first couple of months living among renovation detritus, the pair, along with their eldest son, who, at the time, was living with them three days a week, ended up squeezing themselves into a 500-square-foot rented apartment. But the move, however inconvenient, allowed the renovation to really take off.

“Our original intent was to do some minor renovations – fix up the bathroom and open up the space between the kitchen and living room,” says Kelly. “Once we started stripping back the layers of the house, it quickly became apparent that we’d have to do some problem solving to achieve the open-concept layout that we desired.”

And so they raised the roof, literally. The low-pitch roof was removed and scissor trusses installed to avoid the need for load-bearing walls on the main floor. This also allowed them to raise the pitch of the ceiling from the original eight-foot height to 14-foot vaulted ceilings throughout, giving the space an airy and open feeling.

Both Kelly and Brad, who is trained as a Red Seal Chef and is partner and chief operating officer at the Concorde Group, wanted a warm, open space where they could cook and entertain. With the new open-concept living room and kitchen space, there was room for a 10-by-4.5-foot kitchen island that also functions as their dining table. It’s the perfect spot for friends and family to gather for the Morrisons’ beloved Sunday suppers.

Searching for the perfect spot in the neighbourhood

Back in 2007, when Kelly and Brad Morrison were house-hunting, they were searching for a site, not a house. After scouring the city, they found the perfect spot in the neighbourhood of Chinook Park, where a few mid-century homes still line the streets – a quickly vanishing sight with Calgary’s bustling infill industry.

The Morrisons were impressed by the community’s mature trees and winding streets – elements that had taken more than 60 years to develop. “What really spoke to us was the neighbourhood and how this particular house’s footprint sat on the lot,” says Kelly. “You might not think that the property would be as private, located on a corner, but it really is thanks to the large variety of trees that surrounds the home.”

Throughout the renovation process, the couple was careful not to add additional square footage because they wanted the home to fit into the original context of the neighbourhood. Kelly notes that many of the residents in the neighbourhood are original homeowners or are the grown children of those owners who have returned to the area with their own young families.

By Calgary standards, Kelly says, their gem of a home is considered small, but that doesn’t faze them. “In truth,” she says, “we rarely use the lower level of our house. We usually only inhabit the 1,400 square feet on the main level.”

Designing a home with mid-century vibes

While the renovation was underway, Kelly Morrison, who is a founding partner of RAD Architecture, was still finishing up her master of architecture degree. Exposed to new ways of thinking and plenty of inspiration on a daily basis, she ended up using a lot of her educational expertise on her own home.

“Because the renovation was moving so fast, we had to make a lot of decisions on the fly, which is typically not how you ever want it built
at all,” she says.

But, thanks to her pre-existing openness to new ways of thinking about design, she was able to accomplish her vision. The outcome is what she dubs “mid-century mountain,” merging her and Brad’s two favourite design styles. The warm custom walnut millwork throughout the entire home is a nod to the couple’s love for mid-century-modern design, while the exterior and windows make reference to mountain-modern style.

The importance of light also played a big role in the overall design Kelly put in place for the home. The main floor’s large windows and skylights allow the mood of the room to shift with the light and shadows throughout the day.

Kelly and Brad Morrison were able to maintain the mid-century feel of the home while achieving privacy with this custom fence Kelly designed herself. 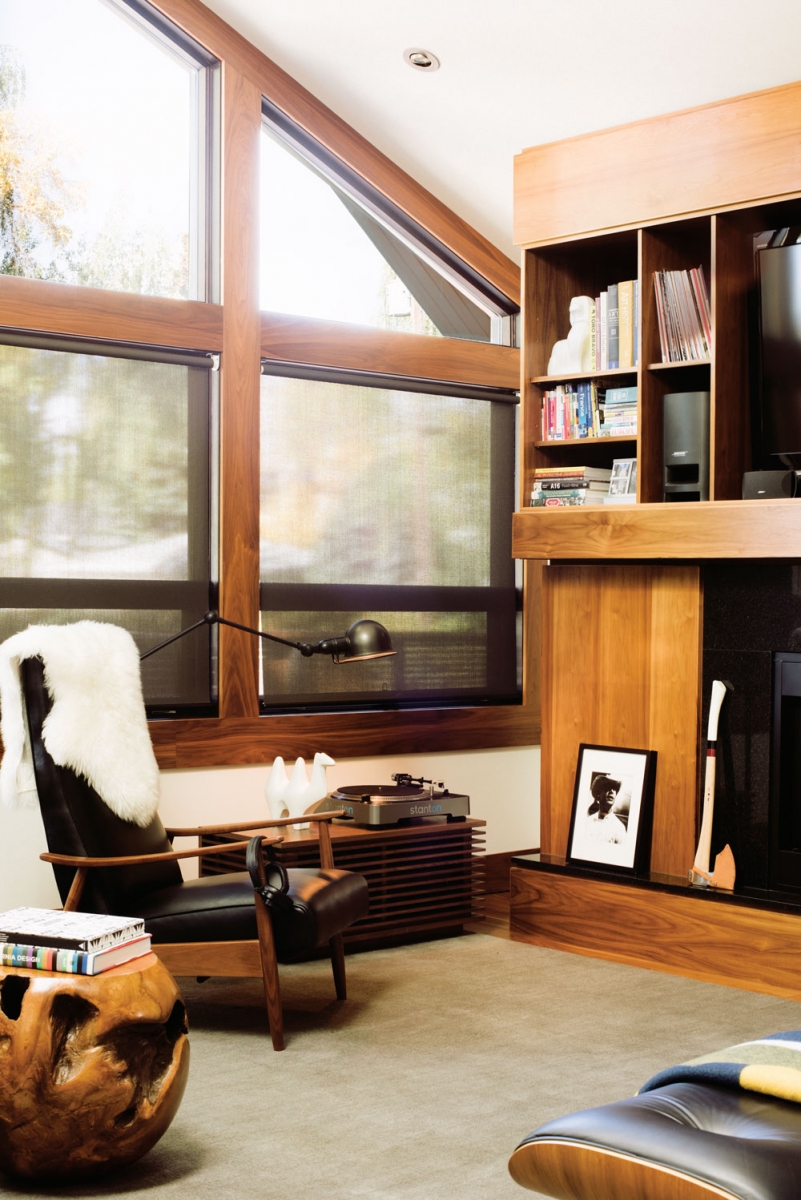 The warm and cozy living room is filled with treasured artwork, collections and books. 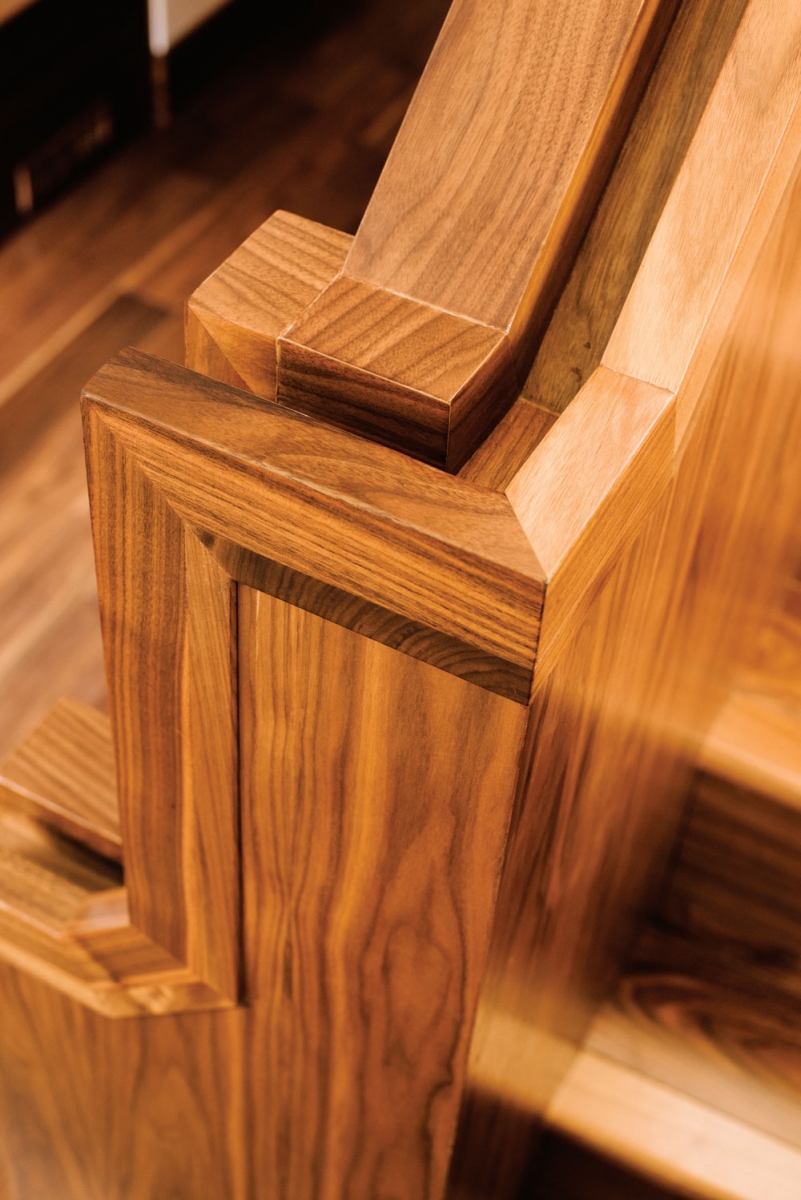 The warm wood throughout the entire home is enhanced by unique details such as this bannister millwork on the stairway to the lower level. 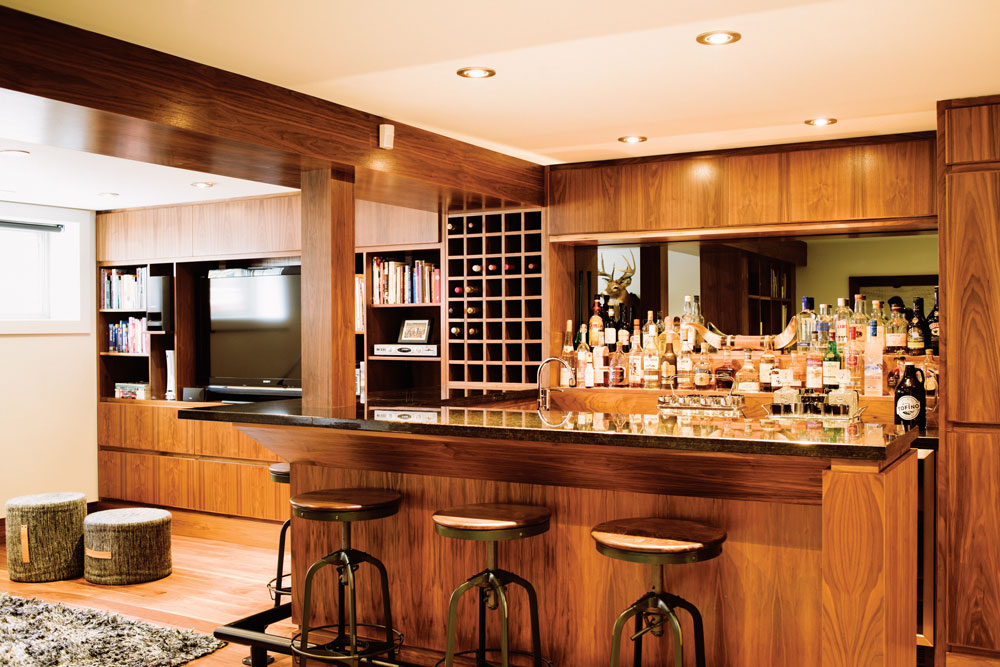 No mid-century inspired rumpus room is complete without a fully stocked mirrored bar. 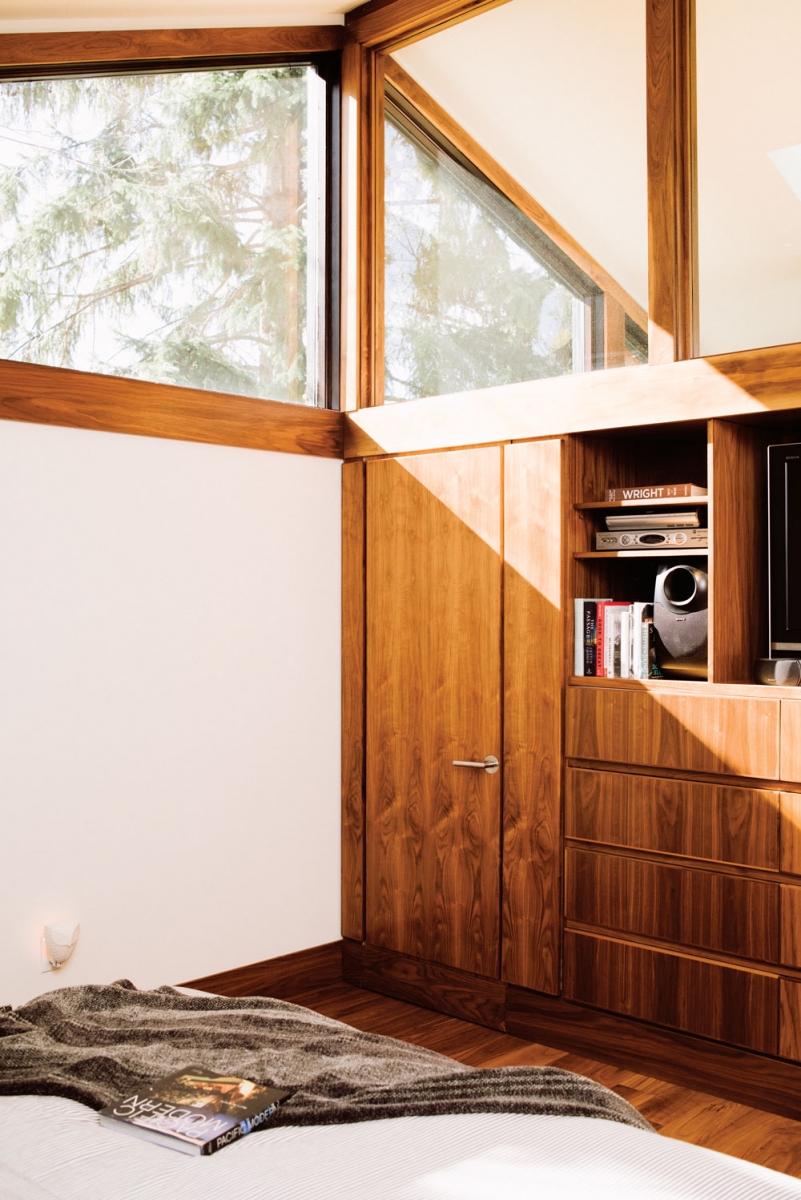 The clerestory windows in the master bedroom allow only warm light and glimpses of trees. 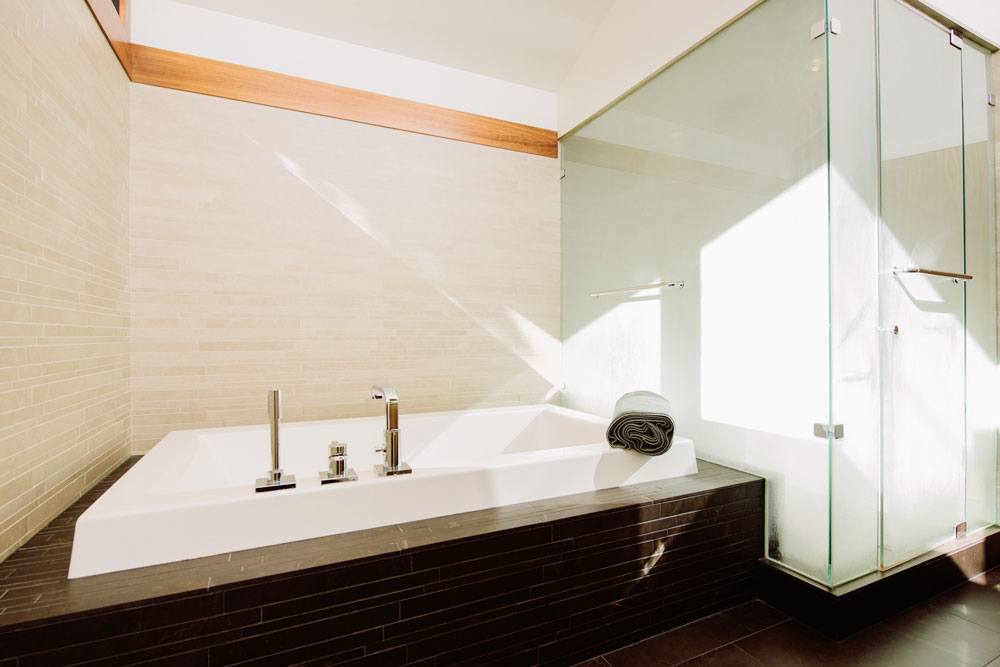 The master bedroom and master bathroom share the same clerestory window. A small bedroom was eliminated from the old floorplan to make way for this larger, spa-like ensuite space.

1. Homeowner and architectural designer Kelly Morrison believes in the design philosophy of using timeless materials and colour palettes and bringing pops of colour and texture into the home through furnishings, books and interesting artifacts.

2. To imbue the home with a natural feel, Morrison installed clerestory windows and skylights throughout, giving the occupants views of the treetops above, not the streetscape below.

3. The renovation wasn’t merely cosmetic. To make the home truly functional, outdated mechanical and plumbing systems were replaced with high-efficiency equipment and products.

4. Faced with a dilapidated garage, Morrison knew it was time for a major change. The new garage was relocated to a different section of the lot, freeing up space for a west-facing patio perfect for afternoon and evening sun.

5. It was important to the Morrisons to integrate their favourite design styles – mid-century modern and mountain modern – to create a space they really loved. The heart of the home is their kitchen and dining island.