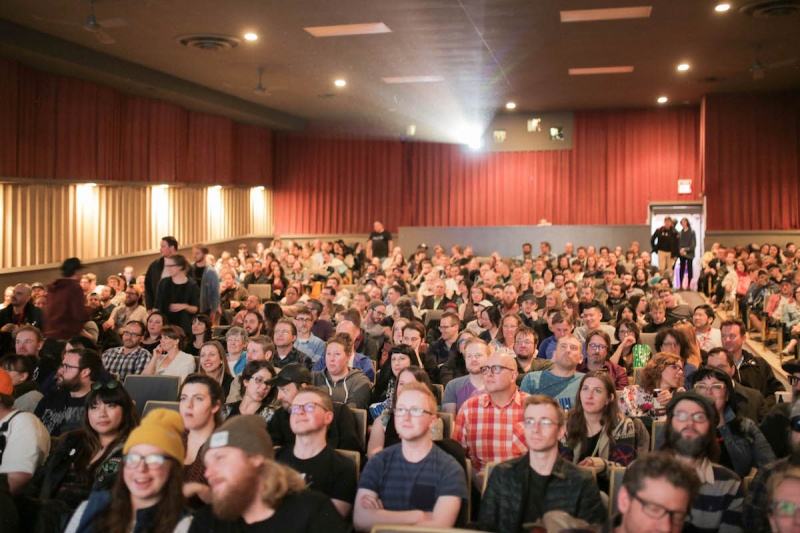 Audiences gather at the Globe once again for the sixth annual CUFF.Docs. Photography by Caitlind R.C. Brown.

The Calgary Underground Film Festival presents the sixth annual CUFF.Docs at the Globe Cinema from November 28 to December 2. As you may have guessed from its name, this festival is all about the documentary. From the grotesque to the heartwarming and from educational to uproarious, this eclectic collection of films isn’t something you could expect to see everyday in the city. Whether you’re a music fan, B-movie geek or want to see a local talent on screen, this lineup has something for you. Head to the festival’s website to see the full lineup and schedule. Passes and tickets are on sale now; a lifelong membership is $10 and gets you deals on all CUFF presentations.

Even the squeamish should enjoy Rodents of Unusual Size given that the plot of the film is all about eradicating the 20-pound swamp rats known as nutria. If that sounds cruel just bear in mind that this is a primal fight for survival — the Louisiana town has been overpopulated with the invasive South American species and it’s threatening their way of life. Already burdened by hurricanes and other natural disasters, the resident of Delacroix Island are now losing the wetlands that act as the last line of defence against storms. See how they face this particularly unusual — and unnerving — ecological battle for survival.

Screening at the Globe Cinema on November 29 at 7 p.m. Tickets available here.

Slam poetry doc Don’t Be Nice comes to Calgary after earning rave reviews at Hot Docs and AFI 2018. The film follows the Bowery Slam Poetry Team on its journey from New York to the National Poetry Slam competition in Atlanta. Pushed to the limit by both their coaches and the onslaught of police brutality headlines during the summer of 2016, the team’s members pursue their craft with a life-or-death seriousness that will leave you on the edge of your seat.

Screening at the Globe Cinema on November 30 at 7 p.m. Tickets available here.

Step aside Tommy Wiseau, the real master of trash cinema needs his day in the limelight. Stephen Groo has made over 180 films in the last 20 years with extremely limited resources and even less success with critics and the box office. The fiercely DIY film fanatic has never slowed down or compromised for anyone, earning him the cult-like respect of other unusual film industry members like Jermaine Clement (Flight of the Conchords) and executive producer Jared Hess (Napoleon Dynamite). But what will he do when he finally gets the chance to make his long-shelved elf/human romance film? And with the chance to convince Jack Black to be his star, no less? Find out the answer in this loving wink to the tireless spirit of B-movie makers. Director Scott Christopherson will attend and conduct a Q&A following the screening.

Screening at the Globe Cinema on December 1 at 7 p.m. Tickets available here.

What do you do when your art gets you labeled as a terrorist? Or when you have to face the might of the NFL in court, just as an entire nation turns its back on you? If you’re Mathangi “Maya” Arulpragasam (best known by her stage name M.I.A.), you fight until the bitter end no matter what the cost. This retrospective film follows the singer, rapper, producer, artist, filmmaker and provocateur’s life from her origins in the Tamil region of Sri Lanka to the underground of London and ultimately to the top of world’s charts. Best known for her smash hits “Paper Planes” and “Bad Girls,” M.I.A. has always been a tireless advocate for refugees and global justice. This film compiled from years of archival video taken by Arulpragasam and director Stephen Loveridge is an intimate portrait that explores identity’s construction and contradictions in unflinching detail.

Screening at the Globe Cinema on December 1 at 9:45 p.m. Tickets available here.

Wolves Unleashed: Against All Odds

Animal trainer and documentarian Andrew Simpson will make the Canadian premiere of his second film on the closing night of CUFF.Docs. Alberta-based Simpson has trained everything from birds to bears but his legacy is best defined by his work with wolves — his work as a trainer has been integral to productions including The Revenant, Wynonna Earp and even Game of Thrones. In Unleashed, Simpson travels to China to train wild Mongolian wolves from scratch on deadline for a blockbuster production. The film follows all the challenges and triumphs that come along with this emotional undertaking. Simpson will be in attendance for the screening and will offer a Q&A upon its conclusion.

Screening at the Globe Cinema on December 2 at 7 p.m. Tickets available here.