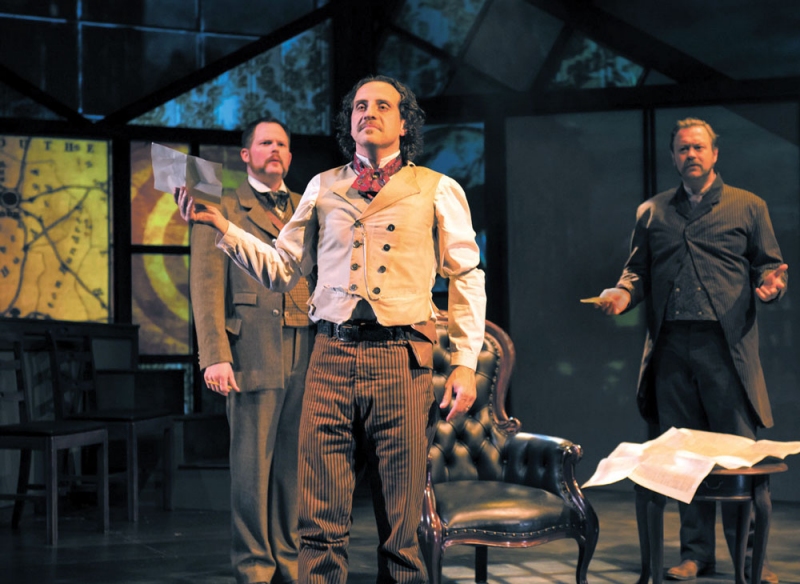 Haysam Kadri portraying Sherlock Holmes in Veritgo Theatre's 2014 production of The Hound of the Baskervilles. Photograph by Ben Laird
Growing up, Haysam Kadri’s goal when reading the works of Shakespeare was similar to that of most other students: survival.

“We would read the text in English class and I would count to see when my paragraph was, and I wouldn’t listen to what was going on,” Kadri says.

The classroom exercise didn’t turn him off of the Bard forever. He’s now the artistic producer of The Shakespeare Company, a Calgary theatre company that produces works of and inspired by Shakespeare, which Kadri deems “the best plays in the English language.”

Kadri’s involvement in the local theatre scene goes much deeper. In the last few months, he directed Theatre Calgary‘s production of The Shoplifters and performed in its production of The Crucible, while producing The Shakespeare Company’s Romeo and Juliet. This month, he stars in Alberta Theatre Projects’ Cockroach and will play the titular role in The Shakespeare Company’s Macbeth, a co-production with Vertigo Theatre. Soon after, he’ll play the lead in Vertigo Theatre’s Sherlock Holmes and the Case of the Jersey Lily.

“It’s almost like the more balls I’m juggling, the more efficient I am,” Kadri says.

Ironically, a theatre career didn’t seem to be in Kadri’s future at first. Originally planning to study geology in college, his aptitude for acting showed itself during a drama elective. He was eventually chosen as one of only 12 people in the country to enter the Birmingham Conservatory for Classical Theatre Training at the Stratford Festival, where he spent seven years and six seasons performing mostly Shakespeare plays.

Returning to Calgary in 2006, Kadri delved into the city’s arts scene as an actor, director, teacher and stage-combat choreographer, joining The Shakespeare Company in 2012. Since then, he’s concentrated on growing the company’s presence in the city and making Shakespeare more accessible to younger generations by performing condensed productions through the company’s outreach program.

Although he is extremely busy, Kadri says it’s exciting to work on so many different plays and to learn from other local talent and theatre companies.

“I really thrive on being a part of this arts community,” says Kadri. “I think it’s an important time in the growth of our city, and I’m right in the middle of it just trying to help out and trying to be a part of that buzz and that vibe.”