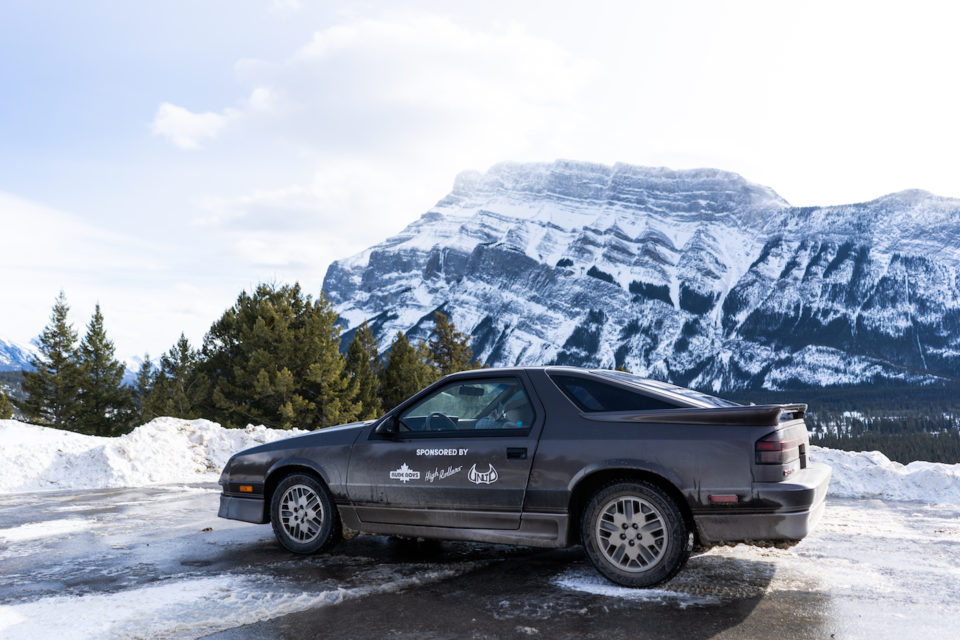 Wanna win this sweet Chrysler Daytona Turbo? All you have to do is beat all the best snowboarders in the Bow Valley at Mount Norquay's Backyard Battle best trick competition on Saturday, March 7, and it's yours. Photo courtesy of Banff Norquay Resort

The Women’s Adventure Film Tour is a night of short documentary films about women, from professional athletes, to those working in the fields of conservation and environmentalism. The overall intent of all the films is to inspire and promote diversity and inclusion in the outdoor industry. As such, the films are suitable for everyone, from kids to adults of all genders. The tour is screening at artsPlace in Canmore on Friday, March 6, and Saturday, March 7. Tickets are $20.

Win a Car at Norquay

The Backyard Battle snowboard contest happening at Norquay on Saturday, March 7, is a head-to-head, bracket-style, best-trick showdown that will culminate in the overall winner being given a car. It’s not a new car by any means (picture something the king of the jocks would drive to high school in the early 1990s). But regardless, this is shaping up to be one hotly contested prize, with the champ destined to become part of local lore. Obviously, all the Battle entrants must be of driving age (16) as of the date of the event and have a valid driver’s license in order to claim the grand prize. Pre-registration is required, with the bracket draw happening on the night of Friday, March 6, at High Rollers (the beerhall-bowling alley in Banff). The contest takes place throughout the next day, with early rounds from noon to 6 p.m. and the semi-finals and finals starting at 7 p.m., followed by an after-party back at High Rollers. The first 32 riders to register get an early-bird discount; after that, registration is $50.

Ride a Chairlift to Dinner at 7,000 Feet

If snowboard tricks and High Rollers isn’t exactly your scene, Norquay is also hosting their second Starlight Dinner of the season on Saturday, March 7. The evening starts with a ride up the North American two-seater chairlift to the Cliffhouse Bistro, the historic teahouse built into the mountainside at an elevation of nearly 7,000 feet. The dinner is a five-course meal with wine pairings and live acoustic music, and the night is capped off by a thrilling chairlift ride back down to earth.

Do the Brewski at Lake Louise Ski Resort

The annual Brewski Festival at Lake Louise Ski Resort happens this year on the afternoon of Saturday, March 14, at the Whiskey Jack deck and base area. Participants purchase $2 tokens to taste offerings from more than a dozen breweries and distilleries, mostly from Alberta and B.C. The festival goes from 1 to 6 p.m. with live music and free shuttles back to Banff and Lake Louise (a very good idea). Obviously this is an event for those 18 and over, so make sure you have valid ID on you in case you get carded.

The awe-inspiring natural beauty of the Bow Valley does not exempt it from the dark reality of domestic violence. The YWCA Banff helps women and families in the Bow Valley who are seeking to move forward from abusive situations by providing shelter and transitional housing. You can support their efforts by attending the annual VINEart Gala and Auction, a visual-art-focused fundraiser happening on Saturday, March 14, at the Fairmont Banff Springs hotel. The evening starts with a cocktail reception in the conservatory, and proceeds with dinner, live painting by Canmore-based artist Pascale Ouellet, and an auction of artworks, food and destination experiences, and exclusive wines and spirits. Tickets and tables can be purchased at ywcabanff.ca/vineart-gala-auction.

Race the Ski2Tree in Kelowna

The Okanagan is pretty far away for a weekend race event, but a race as awesome as the Ski2Tree just might be worth the extra effort. The race happens on Sunday, March 15 and covers six stages — Nordic ski, snowshoe run, mountain bike, road bike, run and paddle — over an overall course length of 120 kilometres with an elevation change of 3,000 feet. The race can be done solo (gah!), or in teams of up to seven people. All net proceeds from the event are donated to the not-for-profit Youth Outdoor Recreation Society, which provides outdoor recreation, education and leadership activities for at-risk youth in the region.

Hunt for Leprechauns and Clovers at Sunshine Village

Banff Sunshine Village is getting into the spirit of St. Patrick’s Day on Tuesday, March 17, with a scavenger hunt. If you find the leprechaun or one of the six clovers hidden around the resort you can redeem it for a prize in the general offices at the base area. For the best chance of success follow Sunshine on Facebook and Instagram, where they will be giving out clues.

Visit Artists in their Studios at Banff Centre

Banff Centre for Arts and Creativity hosts an Open Studios event at the end of each visual arts residency, in which the resident artists can engage with the public and share insights on their work and creative process. The Open Studios night for the Late Winter Banff Artists In Residency is on Wednesday, March 25, from 4 to 7 p.m. The studios are in Glyde Hall and in the Jeanne and Peter Lougheed Building and the event is free to attend.

One of Fernie’s many claims to fame is that it served as the location for the cult comedy film Hot Tub Time Machine, in which a group of pals on a ski holiday are transported back to their wild ’80s youth through a magical hot tub. You can have your own ’80s ski resort moment at the 6th annual Hot Tub Time Machine retro party taking place this year on the night of Saturday, March 28, at the Griz Bar at Fernie Alpine Resort. Dress code is tight, bright, spandex, one-piece or better yet, all of the above.

The Alpine Powder Belles camp, part of Panorama Resort’s Signature Series of ski camps, is for female skiers who want to gain knowledge and confidence in order to make better decisions in the backcountry. Alpine Powder Belles is being presented in partnership with Yamnuska Mountain Adventures and runs Saturday, March 28 to Thursday, April 2. In addition to being for women, the camp will also be run by women, with all-female guides and coaches, including lead coach Erica Roles, a senior guide with Yamnuska (IFMGA/ACMG certified) and CANSI Level 2 ski instructor.

6 Horror Films and Shows with Connections to Calgary