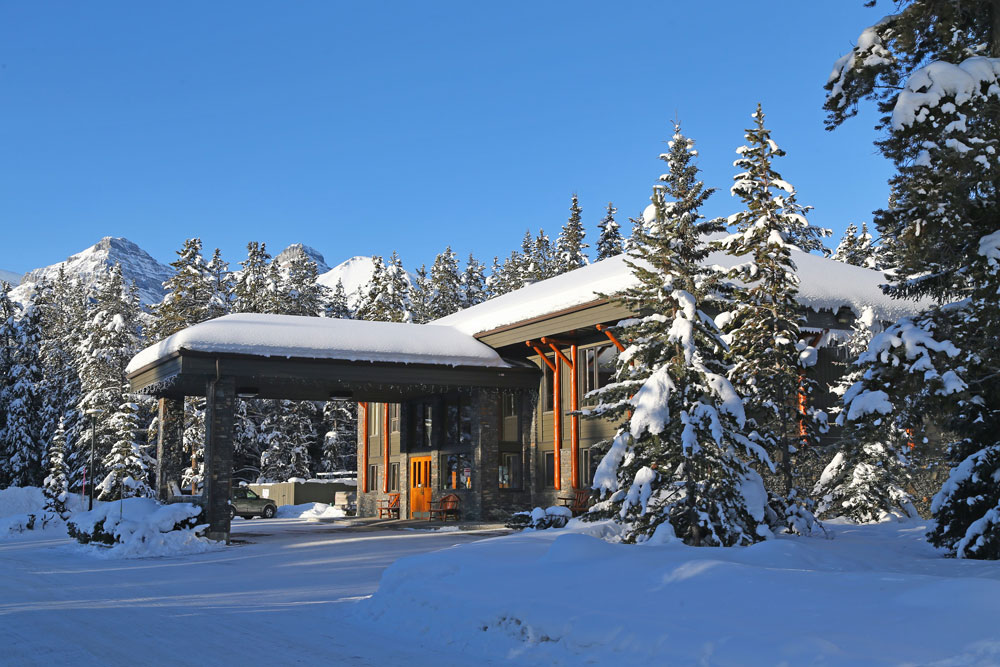 It has been called everything from the Wonder Trail and the Glacier Trail to one of the most scenic highways in the world, but most Calgarians know the 230-kilometre-long Highway 93 cutting through the epic Canadian Rockies, bookended by Banff National Park in the south and Jasper National Park in the north, simply as the Icefields Parkway.

With its sheer density of 100 ancient glaciers, panorama of peaks, cascading waterfalls and robin’s-egg-blue lakes, its alpine meadows and valleys of thick pine and larch forests, the parkway’s spectacular wilderness makes you feel utterly small while bolstering your spirits with its jaw-dropping natural beauty.

The story of the Icefields Parkway

Just driving up the Icefields Parkway today is a testament to the road’s rich past. After all, you are journeying down the same path as the early explorers, intrepid Swiss mountain guides, fur traders and the First Nations people who used this exact route along the Continental Divide to cross the Rockies. Long before there was a road between Banff and Jasper, this trip took three weeks one-way by pack horse.

Part of the parkway’s origin story stems back to a mistake. In 1827, after crossing the Athabasca Pass, a major trading route through the Rockies north of the Columbia Icefield, David Douglas, a Scottish botanist working for the Hudson’s Bay Company, incorrectly recorded the heights of Mt. Brown and Mt. Hooker. His mistake labelled them the highest points in the Rockies and this error spurred mountaineers to search for the fabled peaks.

It was a fortuitous error, as geologist Arthur P. Coleman finally found Douglas’ calculations to be wrong in 1893 after spending years climbing and mapping the area. However, along the way, Coleman and his companions had opened a trail from Sunwapta River to Jasper, laying ground for what would eventually become the Icefields Parkway.

To make this mountain route more accessible, construction of a single-track road began in 1931. It took crews of 600 men more than 10 years under a Depression-era works program to build the highway using hand labour and horses and only one mechanized tractor per work crew. For the most part, the Icefields Parkway was carved by hand with horses pulling graders, plows and wagons moving loads of earth. Oftentimes, surveyors made up the route as they went along if the work seemed too much to fill depressions or to remove small hills – lending the highway its now famous bends and turns.

In 1940, the Icefields Parkway finally opened to the public. It marked the turning point for tourism to a region that was previously isolated. It wasn’t until after the 1950s that more drivers discovered the Icefields Parkway and tourism really boomed. Lodges that sprang up during this time are still open to the public today, including Jimmy Simpson’s log cabin Num-Ti-Jah Lodge on the shores of Bow Lake and the Brewster brothers’ Icefield Chalet, now the Glacier View Inn, located within the Columbia Icefield Glacier Discovery Centre at the foot of the Athabasca Glacier.

Your seven-step itinerary when driving the Icefields Parkway 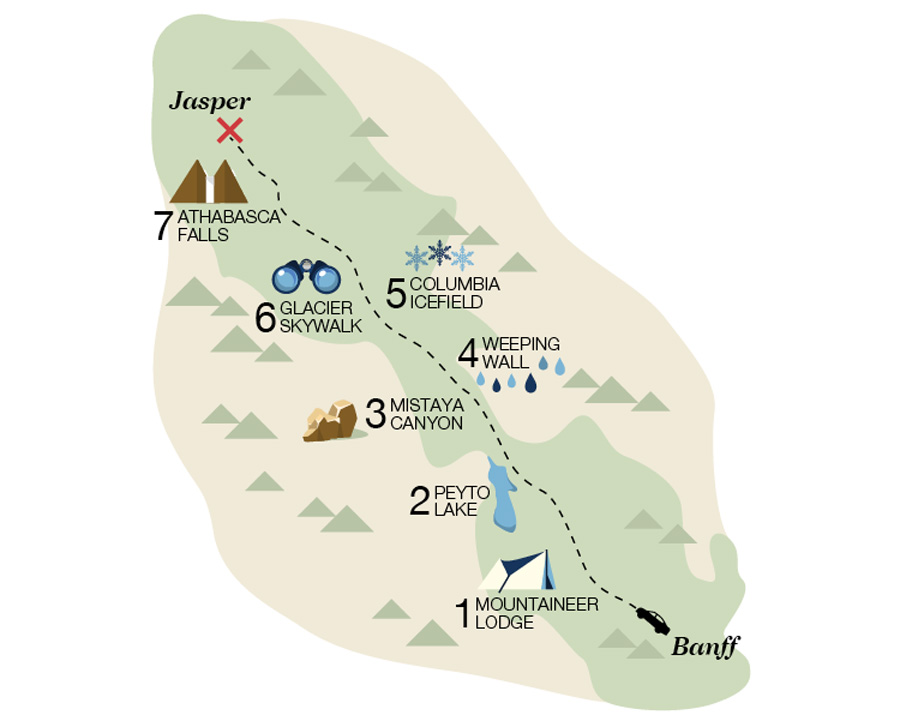 Nowadays, 1.2 million people travel the Icefields Parkway each year. While most visitors come in the summer months, there is no reason the winter season should prevent visitors from embarking on an epic road trip experience that National Geographic deemed a “Drive of a Lifetime.”

Once the snow flies, cross-country and backcountry skiing trails, ice climbing and winter camping adventures beckon. Even if these activities aren’t exactly up your alley, travelling down Highway 93 in winter lends visitors heart-stopping views of high peaks across valleys punctuated by falling snow and mist and countless scenic spots to visit.

Remember to purchase a national park pass as you enter Banff National Park travelling west on the Trans-Canada Highway. While there are 12 campgrounds, six hostels and three resorts along the Icefields Parkway, most accommodations are seasonal and only open from April to November. Accommodations in Lake Louise and Jasper fill up early, so winter visitors should plan ahead. This leaves ample time for exploring the sights and history of the parkway while still having home bases at either end with all the amenities. That said, you need to be prepared for ever-changing winter driving conditions.

Start your parkway road trip in the pristine hamlet of Lake Louise, 40 minutes west of Banff. The centrally located Mountaineer Lodge is only three kilometres from the Lake Louise Ski Resort and nestled in a pine forest with amazing views of Mt. Temple and Mt. Fairview. Wood interiors and wildlife wall mounts can be found across the lodge’s 78 spacious rooms.

Another option is to rest up at the charming Canadian Rocky Mountain Resorts-owned Deer Lodge, just minutes from Lake Louise. Originally built in 1923 as a teahouse, this cozy, century-old property has views of the Victoria Glacier and rooms with historic furniture. 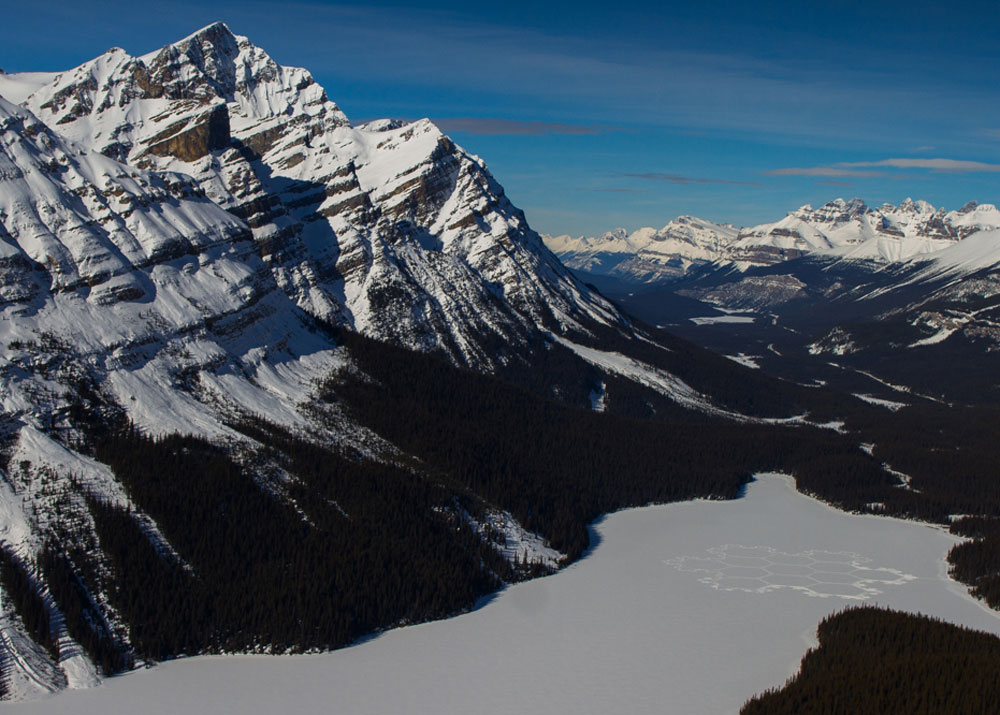 Make the Peyto Lake viewpoint your first Icefields Parkway stop. While it is typically teeming with visitors in the summer who flock to see the stunning turquoise alpine lake in the deep glacial valley, a winter visit gives you a quiet, serene snowshoe trail, often dusted with fresh powder. Turn off the highway at the sign for Bow Summit for a quick two-kilometre return trip.

Further north, about 12 kilometres from Bow Summit, Mistaya Canyon is a 20-metre-deep slot canyon that has been carved out by ice scraping and water eroding the underlying limestone rock. In winter, it’s an impressive sight of frozen water, ice sheets and formations. The canyon can be reached via a short hike from the parking lot. 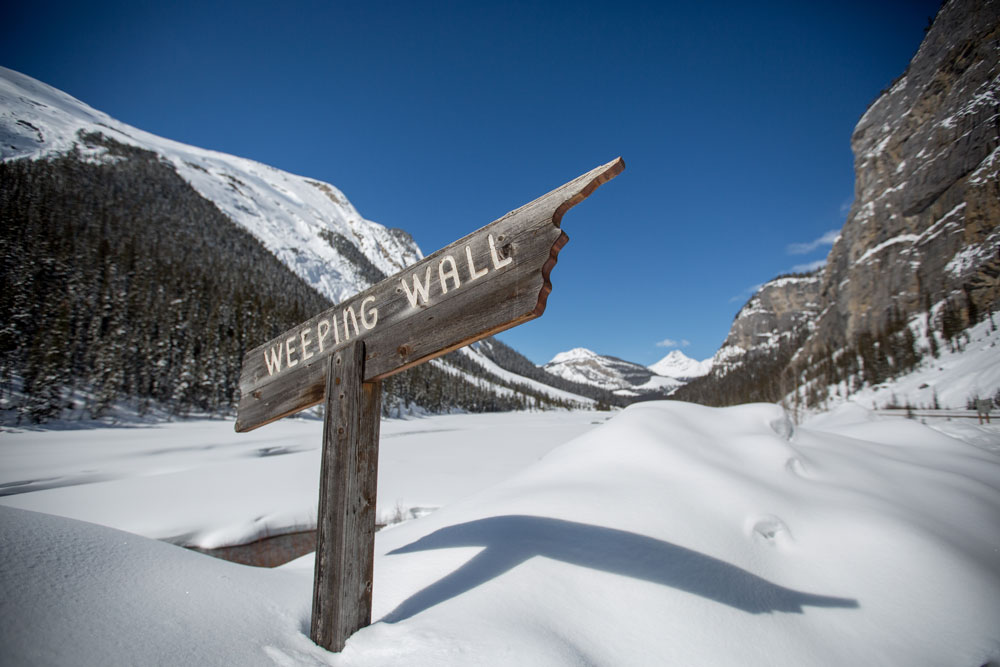 Near the boundary of Banff and Jasper national parks, the famous Weeping Wall is a series of waterfalls that you can’t miss. In the summer months, they fall more than 100 metres down the face of Cirrus Mountain, creating the effect of the mountain crying tears. In the winter, the frozen wall is an ice-climbing mecca, considered one of the best ice-climbing spots in the world. Even if you aren’t harnessing in to climb, stop here to watch in awe as ice-climbers tackle the various routes on the blue wall of ice. 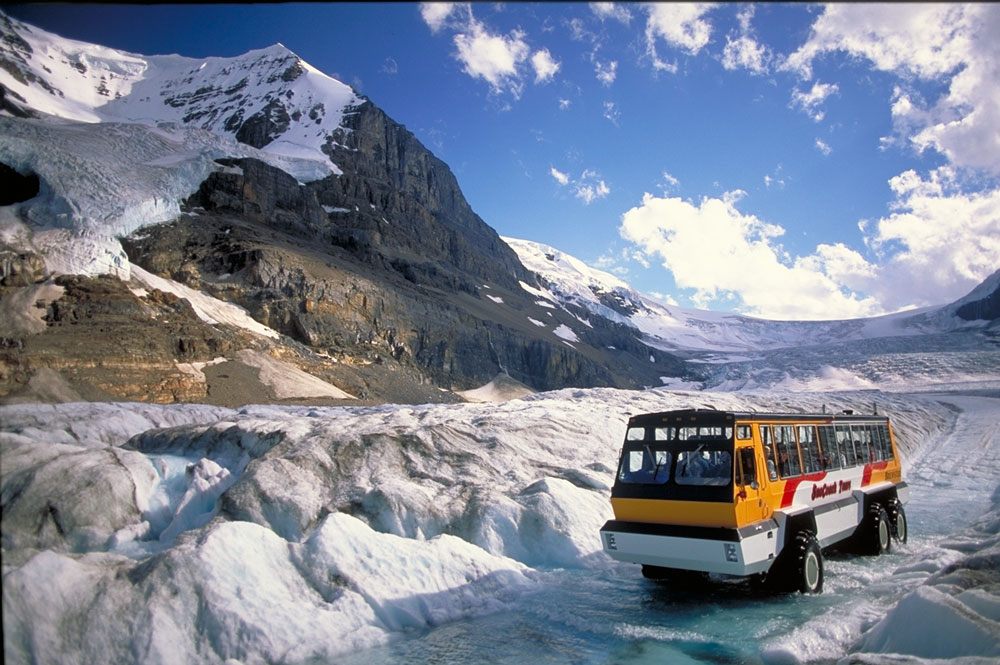 The Columbia Icefield in Jasper National Park is arguably the rock star of the parkway. It is the largest icefield in the Canadian Rockies and nearly three-quarters of the park’s highest peaks are in this area. A lesser-known fact is that the longest known cave system in Canada, the Castleguard Caves, lies hidden underneath. 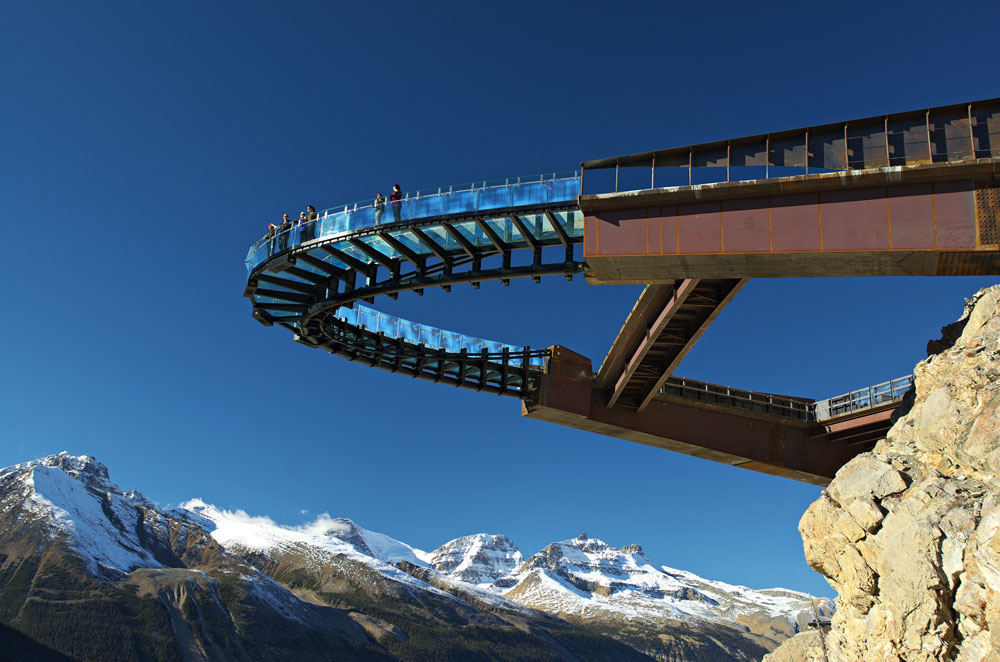 The most visited glacier in North America, the Athabasca Glacier, is also part of the Columbia Icefield and is practically within walking distance of the parkway. Visitors can only venture safely onto the middle of the glacier via Brewster Travel’s Columbia Icefield Glacier Adventure with all-terrain vehicles during the summer months.

Heading north from the Glacier Discovery Centre, sneak a peek at the Glacier Skywalk. Although closed in the winter, the glass platform, designed by Calgary architect Jeremy Sturgess, juts out 280 metres and can be seen from the road. 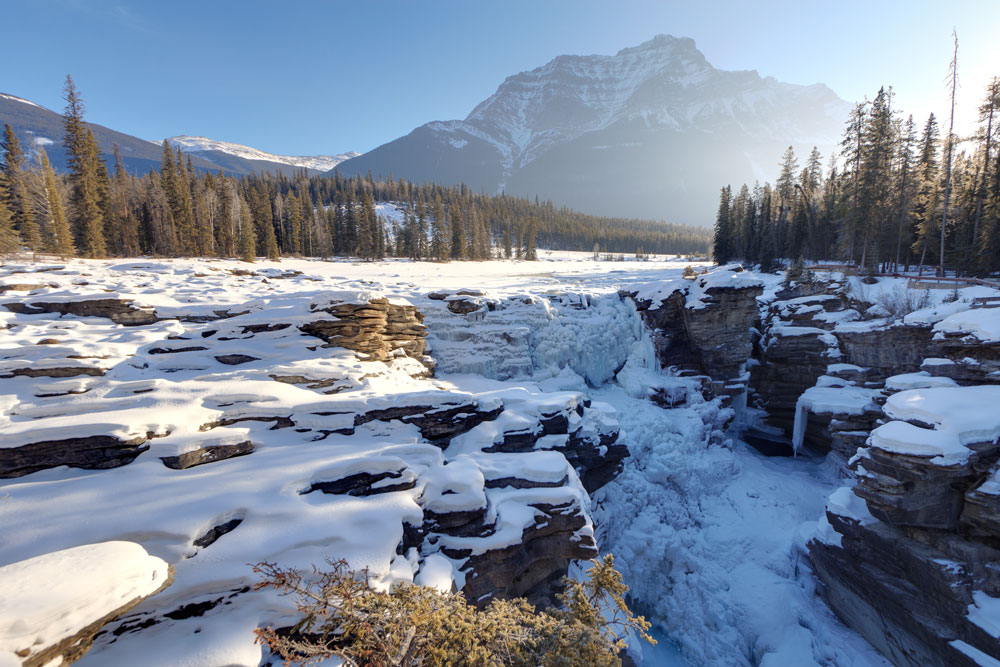 One of the final stops before you reach Jasper is the breathtaking Athabasca Falls. The 23-metre-high, and 18-metre-wide waterfall’s sheer force and volume make up for its relatively low height. The numerous viewing platforms and area walking trails make this a very popular roadside stop.

Arriving in the mountain town of Jasper after a full day of exploring, look forward to resting your feet at the Fairmont Jasper Park Lodge. The 700-acre luxury mountain resort on the shores of Lac Beauvert features heritage cedar log cabins with home comforts. The cabins at Tekarra Lodge also provide respite from the bustle of town, with wood-burning fireplaces and private front porches where you can watch for wildlife or gaze at stars, right from your front door.

While the drive from Lake Louise to Jasper can be done in around three hours by car in good road conditions, to do so without stopping would be a dishonour to the surroundings. The postcard-perfect views of snow-covered mountains and glaciers, rivers and wildlife along the high-elevation mountain road practically beg you to take your time.

As you soak in the dazzling peaks and valleys sparkling in the layer of snow, you’ll soon realize how the bucket-list-worthy mountain drive constantly changes throughout the seasons and even within the same day. Rest assured that feeling of sublime awe and wonder will return the next time you choose to travel back down the iconic Icefields Parkway.