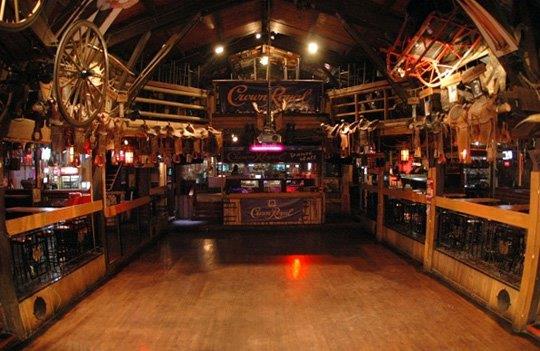 For more than four decades, the rising stars of Canadian country music and their fans have had a home at Ranchman’s Cookhouse and Dancehall.

This past April, Ranchman’s celebrated its 45th anniversary. Since opening its doors on April 27, 1972, Ranchman’s has provided Calgary with a western-themed bar featuring weekly live country music and an appreciation for the rodeo. Now, with the Calgary Stampede fast approaching, visitors can look forward to celebrating the week of western fanfare at one of the city’s most storied country bars.

Ranchman’s has grown from a 200-seat self-serve cafeteria to the 1,050-seat cookhouse it is today. It features touring Canadian country acts every Thursday through Saturday night and has earned Ranchman’s the Canadian Country Music Awards’ “Country Club of the Year” distinction 10 times.

Adapting to shifting preferences over time, Ranchman’s always strived to offer live acts appealing to whatever type of country music happened to be dominating the airwaves at the time. Traditional twangy musicians and more upbeat country-rock stars have all taken the Ranchman’s stage.

“We’re where the locals come,” Ranchman’s marketing director Wendy Daniel said. “We’ve catered to the country dance community, but we are also a country honky tonk with heart.”

But Ranchman’s anniversary was a bittersweet affair, as the celebration came just a week after original co-founder Harris Dvorkin passed away on April 20. The lifelong Calgarian combined his experience in the local bar and restaurant scene with a love for country music and the rodeo, even bringing an annual official Professional Bull Riding event to the Ranchman’s parking lot.

“He was not a casual person about country and western at all, that was his life,” Ranchman’s other co-founder and current vice-president Kevin Baker said. “He was a person who lived and breathed rodeo and the country venue.”

Ranchman’s reputation has only grown through the years as a live music venue. The likes of Paul Brandt, Emerson Drive and Doc Walker were all showcased at Ranchman’s when these Canadian country luminaries were still just rising stars. Regardless of country music’s popularity, this Calgary staple has stayed true to its commitment to the genre, maintaining a solid place in the city’s nightlife for many generations of country fans.

“I would suggest that we’ve lasted 45 years because we’ve stayed true to our roots. Our roots are country and western music, live music, the world of rodeo,” Baker said.

“When people come to the Ranchman’s, they see real country. You could be sitting beside some people who are 60 and on the other side they’re 18. And they’re all having a good time.”

Naturally, Calgary’s more western establishments become a more enticing option every year during the Stampede, as visitors fully embrace Calgary’s western roots. This is a week where Ranchman’s truly shines, bringing live entertainment to its stage every day and regular events all week.

True to its roots, one of Calgary’s favourite western bars will feature live country music every night of the Stampede. Kicking off the festivities on Saturday, July 8 is the platinum-selling Nashville band Lonestar, an American country music staple since the ’90s. Throughout the week, Ranchman’s will also host popular, acclaimed acts from across North America like George Canyon on July 12 and Dan + Shay on July 15.

Greeting the Stampede’s Sunday morning, Ranchman’s annual Cowboy Church service brings an old-fashioned hospitality and service to the festivities. The non-denominational gospel service is paired with a complimentary breakfast on Ranchman’s front patio from 9 to 11 a.m. to provide some old-fashioned hospitality for bleary-eyed early morning risers.

For more than three decades, the Stampede’s rodeo events take a backseat for an evening at Ranchman’s, to this pole climbing tradition. A group of 10 pro rodeo contestants are pitted against 10 local firefighters in a timed pole climb to grab the flag at the top. A contestant auction is hosted at Ranchman’s just before the contest begins, with all proceeds going towards the Firefighter Benevolent Endowment Fund and CPRA Cowboy Benefit Fund.

Catch a ride from Ranchman’s to the Saddledome and back

On the second week of the Stampede, the Saddledome hosts a variety of major country music shows including stars like Johnny Reid, Brooks & Dunn and Alabama. Ranchman’s express will pick ticket holders up at Ranchman’s, take them to the Saddledome, and bring them back to the cookhouse after the show is over with VIP line access and free cover.

Wrap up the week with the rodeo champions

Wrapping up at the end of the event, Ranchman’s Cheers to the Champions party brings in visitors to mingle with the Stampede’s $100,000 Pro Rodeo champions. Admission to the party is by donation to the Ty Pozzobon Foundation, an organization that protects and supports the health of rodeo competitors, named after the 2016 Professional Bull Riding Canada champion, who passed away earlier this year.