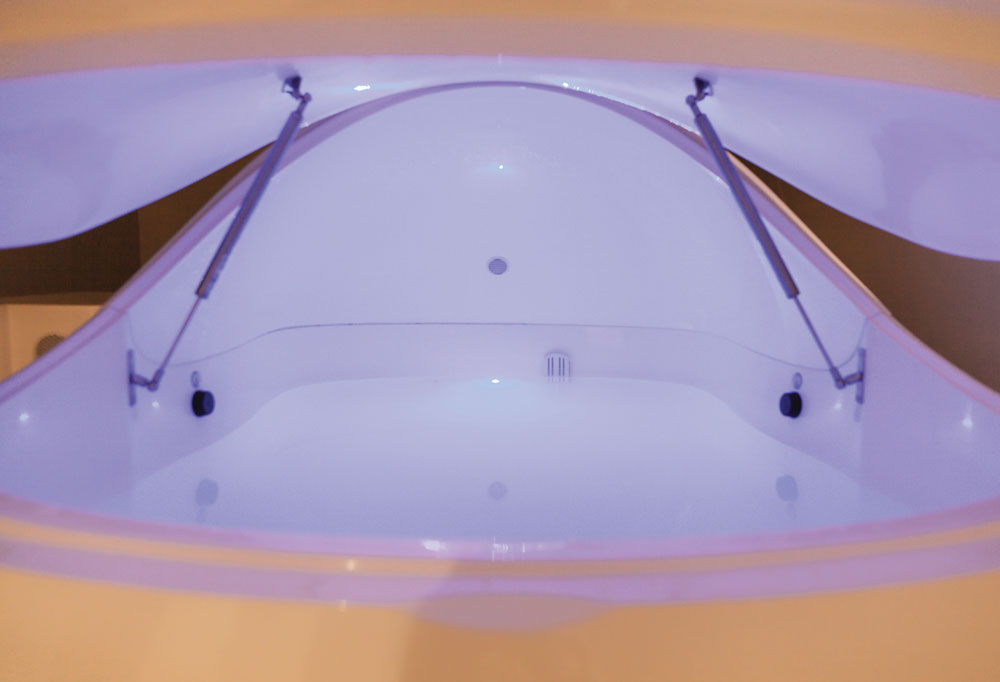 In the 1980 sci-fi movie Altered States, William Hurt plays a professor who crawls into a sensory deprivation tank seeking the deep self that exists beneath the world of people and things. He floats in high-density brine in a silent, dark box, under the influence of untested hallucinogens. Things go wrong. His mind slips to its Neanderthal core and he ends up running naked through Central Park. Oops.

Post-movie, people were sufficiently intrigued to spark businesses in the sensory deprivation tank game. Rumours of hallucinating helped. The “trippy” effects, however, were overblown and the tanks disappeared. I had missed the moment. For 35 years.

However, in the past year, five local businesses set up modern sensory deprivation tanks, rebranded as flotation chambers, or “float tanks.” Floating is no longer about investigating consciousness, as intended in 1954 by its inventor, the neuropsychiatrist John Lilly. In the 1970s, researchers at the University of British Columbia found uses in mainstream therapy. Flotation now offers something good for everyone. The claimed therapeutic effects listed on the website for Urban Escape, a flotation company near downtown Calgary, include a 52 per cent increase in pain relief, 77 per cent increase in productivity and 88 per cent increase in the ability to cope with stress. Others claim multiple sclerosis, fibromyalgia, migraines and restless leg syndrome are helped by the magnesium the body absorbs from the Epsom salts bath.

Floating experts also say it supports spiritual growth and mindfulness practices. Some yoga meditators say they “go deeper” after floating, and websites say some professional athletes say their game improves after doing visualization exercises during a float. And, of course, harried parents like it: inside a chamber, the kids, the job and the grocery list can’t get at you.

Or, so they say. But, as cooks know, the proof of the pudding is in the eating. So I ate. Within a week, I floated at three different spots in the city.

My first float was at Urban Escape. Run by young entrepreneurs, Urban Escape makes floating seems like a very cool thing to do.

Urban Escape is located in a converted house on the edge of Bridgeland. It has two clamshell-style chambers – hard, white fibreglass tanks resembling giant fast-food containers. Each chamber room has a shower, bench and hooks for clothes. Earplugs are de rigeur for many – in addition to eliminating the rumble of trucks on Edmonton Trail, they stop brine from pooling in your ears. Along with towels, there are face cloths in the room. London Semograd, one of the owners, advised taking one inside the clamshell, or “pod,” in case brine gets into your eyes. “The brine stings,” he says, “A lot.”

First, a warm shower. The flotation water is elbow deep and body temperature. The chamber is large – lying down, I couldn’t touch the sides, lid or either end. The lights in the tank swam from pink to blue and soothing music played. The controls are inside the pod and simple to turn off.

Floating is easy in brine denser than the Dead Sea. Physics deletes the drowning option. My ears were submerged, but my face was not. Soon, I agreed that Semograd’s comment was right: “sensory deprivation” is a misnomer. “You don’t sense nothing,” he says, “just not very much.”

You feel water against your whole body because you float naked. The air is hot and heavy. If you stir, you sense rotation and feel ripples. Even though it’s dark, you “see” spots of light as your brain tries to make something visual from nothing. And it isn’t silent. Your heartbeat and breathing are loud. My heartbeat was a thumping piston, each beat firing a wave up my shoulders to make my neck pulse like a vibrating balloon. Meanwhile, my breathing rasped as if I were snorkelling.

Initially, I was uncomfortable. My tense lower neck and shoulders hurt. I cradled my neck and focused on relaxing. The problem disappeared. The first benefit! Flotation is said to be good for settling the busy mind. But it’s harder than you think to get your brain to stop swirling with its daily concerns. My carousel eventually stopped turning, but it wasn’t easy. My mind drifted, not thinking of anything in particular. My “hard drive” defragged. Thoughts popped up and went away, and none involved the economy or whether the grass needed mowing. A second benefit!

Ninety minutes came and went – time just disappeared. Some say floating is like being in space. A night dive in a deep cave is closer. Or a retreat to the womb, a warm, wet universe of one. Which is a little creepy, but there it is.

Back in the waiting room, I felt disoriented by the resumption of movement, light and noise. A young yoga instructor who had floated at the same time said she had profound insights during her float. Me, not so much. And neither of us hallucinated. Drat! But the experience was worth repeating. Twice more. 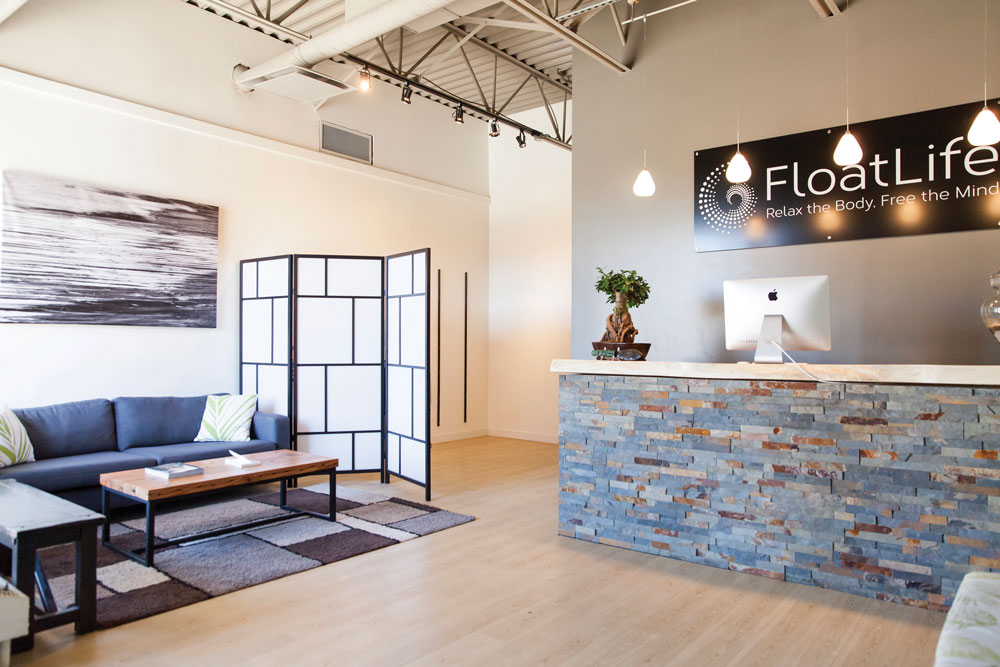 FloatLife seems like a place for the hip professional – like the company’s owners Dustin Ryan and Isaac Neubert. FloatLife is the city’s largest flotation operation with five clamshells each with light and music options. I discovered that when the salts touched a minor road rash injury I had they burned to teeth-clenching levels, but, within a few minutes, the pain went away. This time my heartbeat and breathing weren’t distracting. I dove into thoughts about a story I was stumbling over writing, and I found I was visualizing the action more than thinking about words. I was disappointed when the session ended – I hadn’t finished my work!

Coming out of the chamber was, again, disconcerting. After a shower, I wandered into the sitting area and chatted with another floater who confessed to sleeping through much of it. She seemed embarrassed, but sometimes that’s how it goes.

Floating at The Home of Om

The feeling at The Home of Om, a mother-daughter operation in Mission, is perhaps best described as “heartfelt.” The space has a New Age sensibility complete with crystals and incense. The primary service offered at The Home of Om is meditation therapy. Om has only one flotation chamber. Rather than a clamshell design, this one looks sort of like a large pet carrier, with a door on the end that opens to let you in. The chamber has music, but not lights. Angel Rogers, the matriarch, recommends “reintegrating” for a few minutes post-float in an adjacent room with swirling lights and music.

The Om unit is smaller than the clamshell flotation tanks, but I still couldn’t touch any of the sides when I was floating inside. Quieting my brain was easier, but I found I didn’t have enough thoughts worthy of contemplation for a third float so soon. But my shoulders and neck, tense again, stopped aching, and I was mellow at the end. Score!

Om is a community-sensitive business. Flotation is just a part of the service offered to help people get better balance and health. Rogers doesn’t turn away those who can’t afford her services. “Don’t assume we can’t help you; come in and let us determine that,” she says.

There are two other business in or near the city that offer flotation. And although I was finished floating, I stopped in to check them out anyway.

Floating at One Love Float 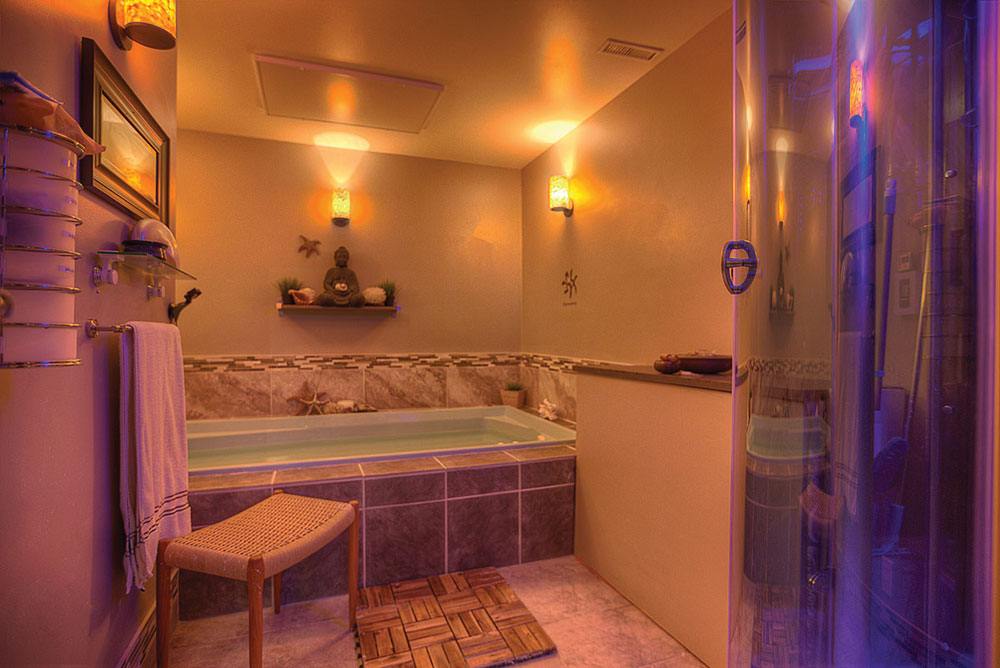 photograph courtesy of one love float

One Love Float is a solely owned business with one pet carrier-style chamber and a room with an infinity tank, or a large, central bath the owner, Treeka Drake, calls “the open room.” One client sends her engineer husband to float because, she says, “Afterward, he listens to me better.”

Salt Water Sport & Spa in Cochrane is a medical clinic with one flotation cabin that doesn’t have lights or music. This spa is about fixing what ails you, rather than entertaining you, and in that sense feels a bit like the auto repair shop you take your broken car to. Helpful, but not much fun. The enthusiasm for floating is justified, and the essence – brine, darkness and silence – is the same at each location. The key part – feeling better afterward – is somewhat dependent on what you bring to it. Your expectations and the ambience of the place count.

Floating is not for everyone. Some might feel closed-in, and others, used to their heads spinning with 15 thoughts at once, might not want to shut down. For the rest of us, a float with lights, gentle music and nobody bothering us could be perfect.

And don’t worry, no one turns into a naked William Hurt howling at the moon.

[Correction: A previous version of this story said that floating is easy in brine denser than the Red Sea. We meant the Dead Sea. This version has been updated with that change.]