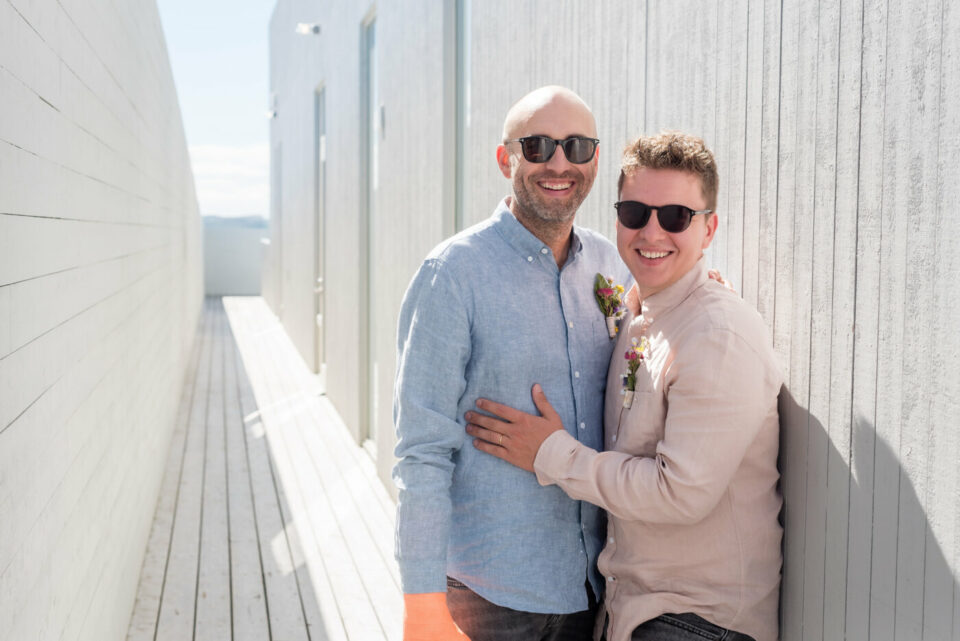 Dean Paddock, from Calgary, and Ivan Malyshev, from Russia, met in 2015 while vacationing in Tel Aviv, and stayed in touch on social media. Around that time, government-led initiatives in Russia were targeting and persecuting members of the LGBTQIA2+ community, and Malyshev had begun to fear for his safety in his home country. In May 2016, he moved to Vancouver and obtained the status of a protected person.

“It was a heartbreaking decision for me to leave my home, but leaving was also one of the best decisions of my life as it gave me the opportunity to build my life and be myself,” Malyshev says.

The two remained in contact as Malyshev settled in Canada. Three years later, Paddock invited Malyshev to join him at a concert in Vancouver; Malyshev suggested they meet for dinner the night before. That night, they each knew they’d found “the one.”

Malyshev moved to Calgary and began studying nursing at Mount Royal University. The program required him to write a personal essay, and his was about how in Russia he would never be able to marry safely. Paddock happened to read the essay and, sensing the perfect opportunity, proposed to Malyshev with a note in the track-changes feature of the document. “When he finally read it, our smiles were so big,” Paddock says.

The couple soon realized the challenges of planning a wedding during the pandemic. “We kept seeing friends and loved ones cancelling their plans and adjusting dates and locations, and this tempted us to think about creating something small, flexible and, most importantly, intimate,” Paddock says.

Last August, while on vacation to Newfoundland’s famous Fogo Island Inn, they decided to elope.

The morning of the wedding on Aug. 24, 2022, Paddock and Malyshev picked wildflowers with a guide who explained the symbolism of each. They gathered fireweed, cloudberry and clover, representing rebirth, optimism and love, and used the flowers to create boutonnières. “The most heartwarming thing was that many of the flowers of Fogo Island are also present in Russia,” says Malyshev.

They were married later that day on an embankment along the coast. The Inn arranged for an officiant and photographer, and the witness was a retired schoolteacher from Canmore they had met on the ferry.

After dinner, the couple went for another walk along the ocean, this time as husbands. “It was surreal; I never thought of myself in the role of ‘husband,’ just because it’s simply not possible in Russia,” says Malyshev. “I think it was very ‘us’ to do it the way we did: location, nature, the intimacy of the ceremony — it was all about us and our love for each other.”

Calgary Style: How to Look Hot When it’s Cold