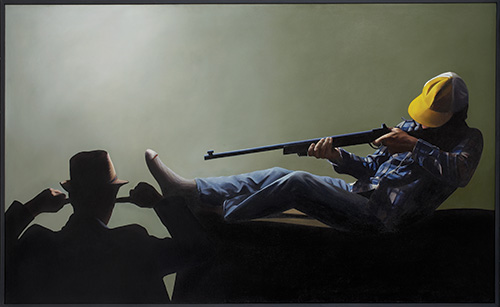 The 1980s were the heyday of spiral perms, pastel Polo shirts, layered with popped-collars and It was the decade that gave us MTV, Nintendo and Bryan Adams. It was also a great decade in Calgary for the 18 following reasons – and so many more.

Art in Calgary in the 1980s was fantastic. It was the decade that Calgary was really searching for and finding its identity. There was a boom and a bust and all of that can be seen in the art of the time. Artists including Cris Cran began long, successful and still-going careers. Art installations were all the rage.

Chris Cran, “Self-Portrait Watching a Man about to Shoot Himself in the Foot,” 1985, Collection oF Glenbow Museum.

See Made in Calgary: The 1980s at Glenbow Museum until January 5, 2014. And, a parallel exhibit Made in Calgary: 1980s Part Two at Museum of Contemporary Art Calgary from September 22 to October 31.

Now it is 11 Avenue, but back in the day, everyone knew that particular strip just south of downtown as Electric Avenue and it was the place where the hardest partying happened. For a full rundown of what happened there, read Electric Avenue: An Infamous Chapter in Calgary’s Partying History by Shelley Arnusch.

Our minor league baseball team played from 1985 until 2002 when the team moved to Albuquerque, New Mexico and became the Isotopes.

Watch this video and try to get the song out of your head. Channel 2 & 7 loved us and we loved it.

It was once one of the best patios in Calgary. Now, you’ll find Anejo where 4th Street Rose once served pizza, potstickers and boxed chow mein.

7. The Rise of Petro-Canada Tower

There is so much to say about these magical 16 days in Calgary’s history.

We got five purpose-built venues out of it, including the Saddledome, Olympic Oval and Canada Olympic Park in Calgary, and Canmore Nordic Centre and Nakiska outside of Calgary. Plus Olympic Plaza for medal ceremonies still lives on as a place to gather and party.

Mascots Hidy and Howdy represented Calgary right up until 2008, when they were removed from our “Welcome to Calgary” signs. The cowboy-themed bears pretty much solidified our whole “western hospitality” persona.

Sunice jackets from the company that started in Calgary in 1976 as a new skiwear brand and became the Official Supplier to the Winter Olympics in Calgary.

“Cool Runnings” was technically released in 1993, but is based on the Jamaican bobsleigh team’s 1988 Olympic efforts. That movie is still must-watch television.

Pins. Remember trading all of those Olympic pins?

And, of course, this theme song.

The south line from Anderson Road to 7 Avenue S.W. opening May 25, 1981. The northeast leg from 7th Avenue to Whitehorn Station began in 1985. The third leg to the University of Calgary in the northwest was completed in 1987.

This kids’ show ran from 1967 to 1997, so it was awesome for more than just the 1980s. The CFCN show aired daily until 1992 when it was reduced to Saturday and Sunday morning entertainment. When it was cancelled in 1997, The Buck Shot Show went out as the longest-running children’s TV show in Canadian history.

How movie-watching has changed. These nine theatres were in what is now Fifth Avenue Place. The largest theatre sat 173 people and the smallest sat 75. Esso Plaza Cinemas were closed in 1996. Those theatres seem so quaint compared to our current multiplexes. Cineplex has plans to build a new theatre in Seton that will have VIP auditoriums with private licensed lounges, table tops on armrests and in-seat menu service.

If you took this route in the 1980s you’ll barely recognise it now. What used to be a two-lane road winding into Fish Creek Provincial Park to a one-lane bridge where you had to stop to let oncoming traffic pass is now a multi-lane corridor. The new traffic pattern was established in 2004. The old bridge is currently in a storage yard.

This children’s game show aired from 1987 to 1992. Remember the cars and the teams of siblings and the clap? Who could forget the overhead clapping?

The Core Shopping Centre was originally built in the 1980s, which meant the demolition of Eaton Centre. Two of the facades of the 1929 store were kept and Eaton’s moved into a new, better space until it left for good in 2002.

The popularity of hot air balloon rides peaked in the 1980s. Balloons with the Re/max logo or shaped like a Dairy Queen ice cream cone or Yellow Pages (remember the Yellow Pages?) were often seen in the skies above Calgary.

You loved him or you loved to hate him. Before becoming our premier, Ralph Klein reigned as Calgary’s mayor from 1980 to 1989.