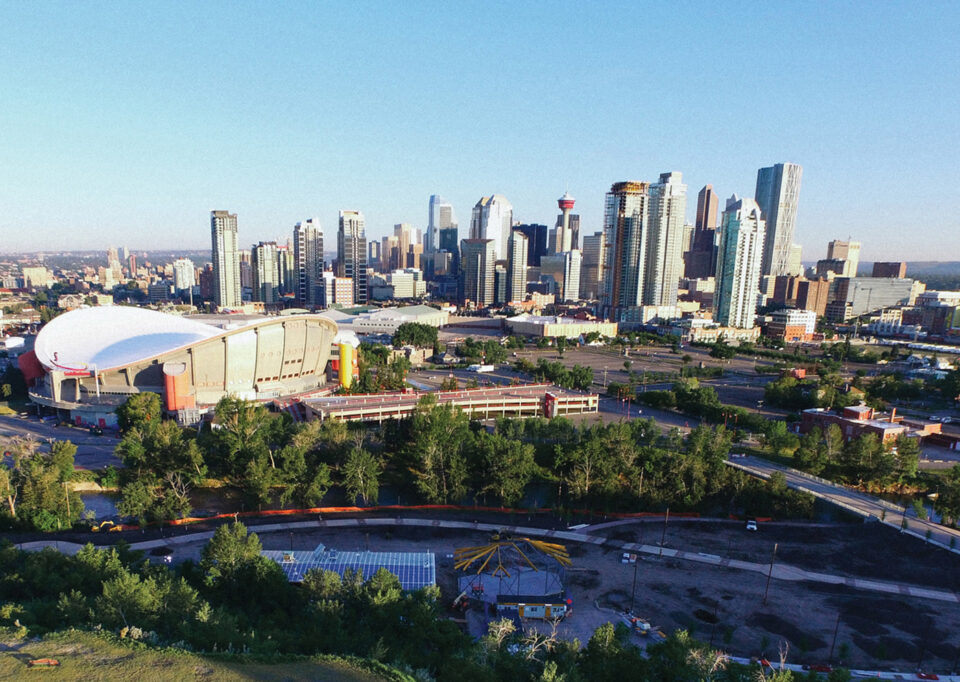 What: Multipurpose parkade with 500+ parking stalls across five levels and a 50,000-square-foot Innovation Centre space across two levels.

Status: Construction is well underway and expected to open in spring 2021.

What: Expand and upgrade Arts Commons in a two-phase plan beginning with adding new venues and meeting spaces. Phase two will update and renovate the existing building.

Status: Funding has been approved and the Calgary Municipal Land Corporation has signed on as development manager. Phase one construction is expected to begin in 2024.

What: Double the rentable area of the current BMO Centre by increasing the floor space to almost a million square feet.

What: Replace the old Saddledome with a new event centre that will also be the home for the Calgary Flames NHL team.

Status: Funding has been approved and in June 2020 the final firms were approved for the design and construction process. Construction is expected to start in late 2021 and be completed in 2024.

What: A multisport fieldhouse featuring a 400-metre track, sports fields, capacity for 10,000 spectators and more.

Status: In 2019, City Council approved $19.8 million to begin planning and designing the new facility. The University of Calgary pulled its funding due to budgetary concerns, however, further funding is still in the works and design plans are still moving forward for the new site while looking for other sources of funding.

What: Add 29 new stations and 46 kilometres of new track to Calgary’s current LRT system. The project will be built in two stages, starting with Ramsay/Inglewood to Shepard, then Elbow River north to 16th Avenue.

Status: General design plans for the expansion have been approved, and construction is expected to begin in late 2021. Stage two functional planning is expected to be ready by spring 2021. The procurement process for stage one has been delayed until early 2021. The timeline for funding from the provincial government is in question.

What: Combine a new four-storey Mathison Hall building with renovations to Scurfield Hall to create a new home for the Haskayne School of Business.

Status: Funding has been approved, and construction is currently underway. Both the project and budget are on time and are expected to be finished by 2022.

What: Renovate and transform Calgary’s Centennial Planetarium into a signature cultural destination. The renovation will add a Class A exhibition space for international exhibitions, more studio space, and allow space for new education programs for youth.

Status: Funding is being sought from the federal government, the Government of Alberta and the private sectors. The City of Calgary has already provided $25 million for the first phase.