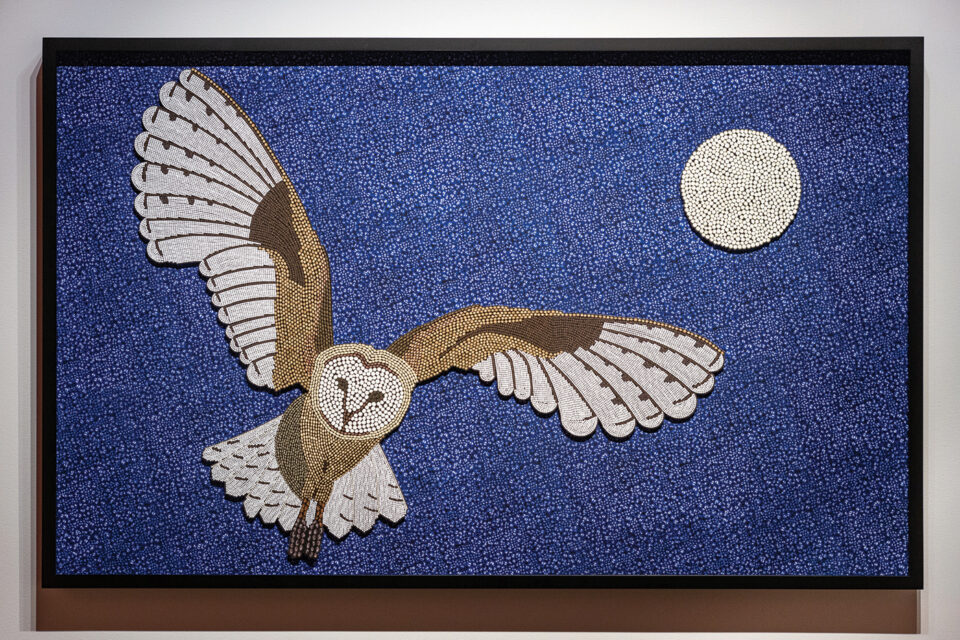 Daphne Boyer has always felt called to the natural world. Her early interests in herbal healing, food harvesting and cultivation led Boyer to a career as a plant scientist. In her 60s, she embarked on an artistic journey, inspired by her attachment to the land and how she observed that attachment through the lens of her Métis heritage. Despite her later start as an artist, Boyer has become known for her innovative, visual works that combine natural-world materials, such as berries or quills, with women’s traditional handiwork, using a technique she invented called “Berries to Beads.”

“Berries are such an essential part of our culture, food and practices,” says Boyer. “I wanted to start with berries because plants are our medicine and our allies.”

Boyer developed Berries to Beads in 2017 while living in Montreal, after working with actual berries proved to be a messy and unfruitful process. “After months and months of work, trying to dry and stitch berries, I ended up with jam on my desk and it was a mess,” says Boyer. “But in the process, somehow or another, came this technique that I now use in my work.”

The technique begins with harvesting and gathering berries and other plant material and photographing them individually. The images can then be manipulated digitally to create artworks in the style of traditional beading.

Her current exhibit, Otipemisiwak, which roughly translates from Cree to “people who live by their own rules,” features pieces Boyer created to honour her great-grandmother, her grandmother and her mother. One of the artworks, For Clémence (named for her grandmother), is a digital photograph of porcupine quills showing an imagined view out of a teepee smoke hole. The sharp quills symbolize Clémence’s tough and adventurous character, while the bold colours and expanding circles represent the younger generations growing into power to create a balanced and equal society.

“I worked with mostly plant material,” Boyer says. “In the end, I realized there was something moving through me. I became flooded with the colour, texture and form of plants, insects and birds that I felt a need to express, and that is part of what you see in Otipemisiwak.”