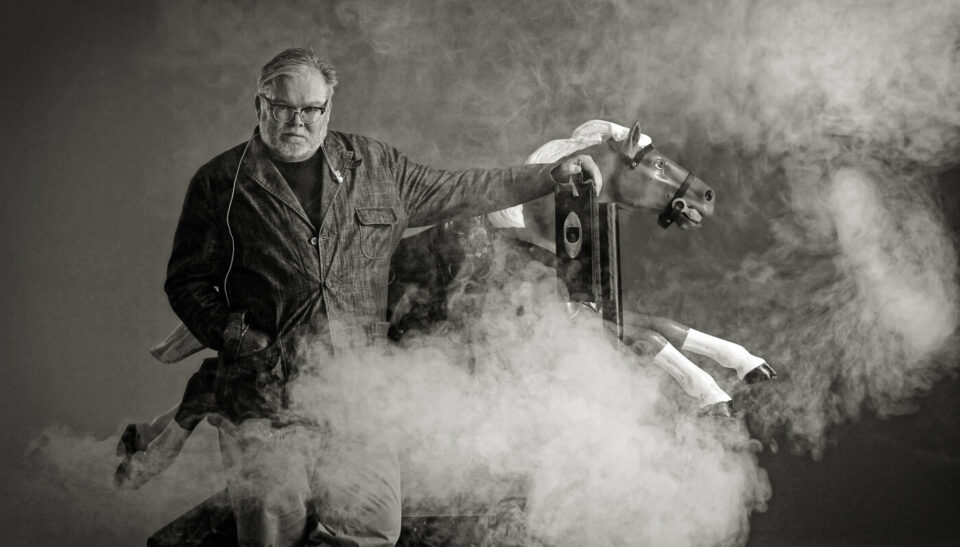 The current rash of commercial  vacancies and general malaise in  Calgary’s downtown core isn’t the first time the city has been in the economic doldrums. Where there are booms, there are busts, and locally, none so infamous as the bust of the early 1980s that turned downtown into a scraped-out shell of its formerly prosperous self. But as history has shown, it’s often during the most economically deadened times that the arts come alive, creating an alternative version of what official revitalization efforts might define as “vibrancy.” Here, writer and director Blake Brooker reminisces about the formative years of his One Yellow Rabbit performance company and the creatively fertile ground he unearthed during one of Calgary’s darkest economic periods.

There were few if any formal support mechanisms for the army of strivers of a cultural bent who lived in Calgary in the early ’80s. No fancy grant programs for emergent practitioners or projects, no prize competitions for the eager and unwashed freaks and beauties newly minted from Alberta College of Art, University of Calgary, or Mount Royal College, making, preparing, plotting and rehearsing. There was just a city in sight of the mountains. There was beauty and wildness here, as well as torpor and dread. There was tenderness and frustration and we wanted to talk about it. Some people talked with guitars, some with paint, others with their bodies in rooms and outdoors. Some described danger and craving with words. There was much to do and those who stayed began, truly, to want to do it here.

I should remember the places we gathered — old brick warehouses, garages, basement studios, disused commercial buildings, repurposed cafés, bars and ballrooms — but like dream buildings, they have evaporated or overlap. It is the people I remember clearly. We started alone in our missions, but not friendless. And soon we all took pride in a thriving underground scene in all the disciplines: video, photography, film, music, literature and performance.

Some from away thought Calgary was a sterile place: conservative, buttoned down, focused on the business of energy. It’s true that many of our citizens had a great understanding of what was going on underneath the surface of the earth, but it was also true that many were deeply absorbed by what was happening on the surface.

The early ’80s saw an advent of the artist-run centre in Canada, and Calgary was no exception. Centrally located in a variety of reconditioned locations there was the Parachute Centre for Cultural Affairs, Artons, Clouds and Water, Dandelion, Off Centre Centre (now The New Gallery) and EMMEDIA.

Don Mabie, one of the directors of the Off Centre Centre, which occupied an old warehouse on Stephen Avenue where the Hyatt now stands, recalls a fertile period with hundreds of events and exhibitions, lectures, performances and happenings. Why did so much happen? Partially it was that he couldn’t say no, Mabie says. And partially, it was what he describes as a sensibility of being loose and open. The atmosphere was supportive. People wanted to help each other. It was, he says, a period of no ideology.

A lack of money may have been a source of strength. More money means more bureaucracy.

My group of beautiful freaks formed a performance group in 1982. One Yellow Rabbit, we called it, a strange name for a group that wanted to stage performances for adults. We started, as others did, in borrowed spots, penniless, but rich in quantity of ideas, if not quality. Early on we adopted the concept of “available light.” As in photography, where you make your shot with whatever light you have, we used only whatever resources we already had to assemble projects. Time? Check. A garage or basement in which to rehearse for free? Check. A place to make noise and stay as long as we wanted? Double check. A lack of resources was our condition but it wasn’t our problem. What we didn’t have, we didn’t need. Limitations were a source of energy. In fact, when presented with too many possibilities we noticed our imaginations slowed, gummed up by too much choice.

Off Centre Centre hosted our first project. We rehearsed and previewed our show there before we went to the first Edmonton Fringe festival in 1982 and presented in a superannuated Imperial Bank of Commerce from the turn of the 19th century. Back to Calgary and back to a succession of other repurposed spaces: an old car stereo-installation garage, an art deco ballroom, a future cocktail lounge. Then and only then did we go west and east, Vancouver, Toronto, Montreal and beyond: England, Scotland, Ireland, Belgium, Holland, Germany, Singapore and more.

If a group like ours and many others like ours could crawl — or pogo — out of the primordial muck of the ’80s without a grand plan for “vibrancy” or “revitalization” it will be interesting to see what comes now. The past, they say, is a different country, and time has the propensity to fly, heal and steal. But people remain similar in their attributes, capable of beauty and malice, duty and invention. I look forward to what our young people will cook up, grand plans or not, looking to their futures with hunger and care.

This article appears in the October 2021 issue of Avenue Calgary.