With July right around the corner, we’ve already begun to see the city gearing up for Calgary Stampede season. Window decorations are going up and the familiar ‘CS’ banner is fluttering on poles once again.

The Stampede is one of the longest standing and most beloved of Calgary’s traditions. It comes with more than 100 years of stuff and lore is a difficult task, all collected by historians with the Stampede and all kept in a publicly accessible archive.

Here are a just a few of the items you can find in the Calgary Stampede archives. 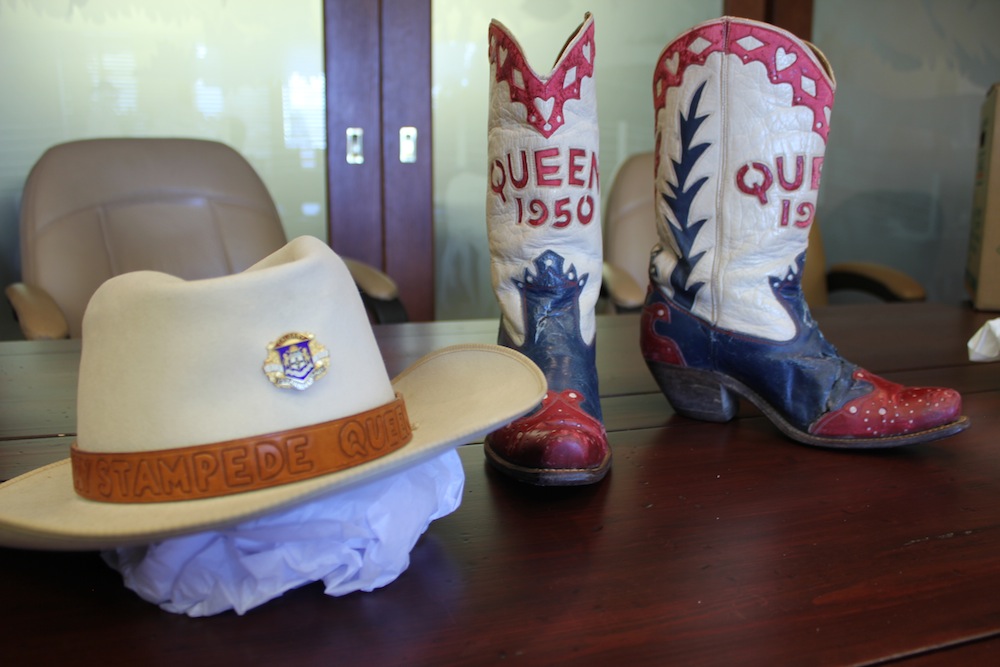 This Stampede Queen hat is from 1950, only four years after queens were introduced, and is one of the few with a a pin instead of a tiara.
The Queen boots from the same year are tiny, though the size is hard to tell as many clothing items were entirely custom made. “A lot of the early queens were incredibly small human beings,” says Shannon Murray, a historical specialist with the Calgary Stampede. 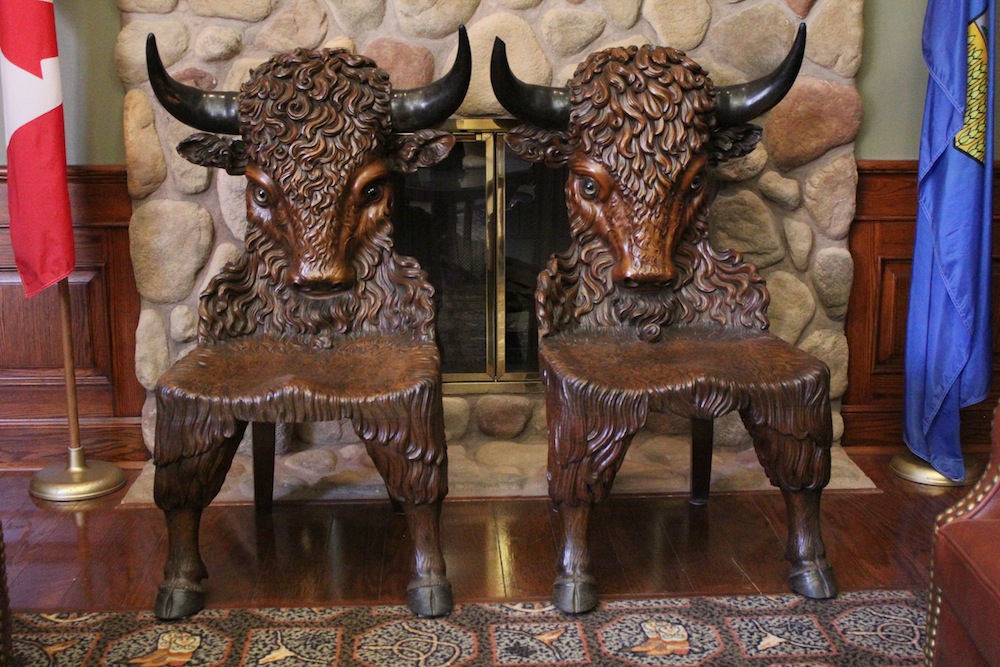 Found in the President’s Room, this pair of buffalo chairs isn’t technically part of the archives, but have an interesting story. They were originally from Murthly Castle in Scotland, and were given as a wedding present to the Stewarts of Urrard more than 150 years ago. In 1996, they were presented to the Stampede by the Western Division of Molson Breweries. 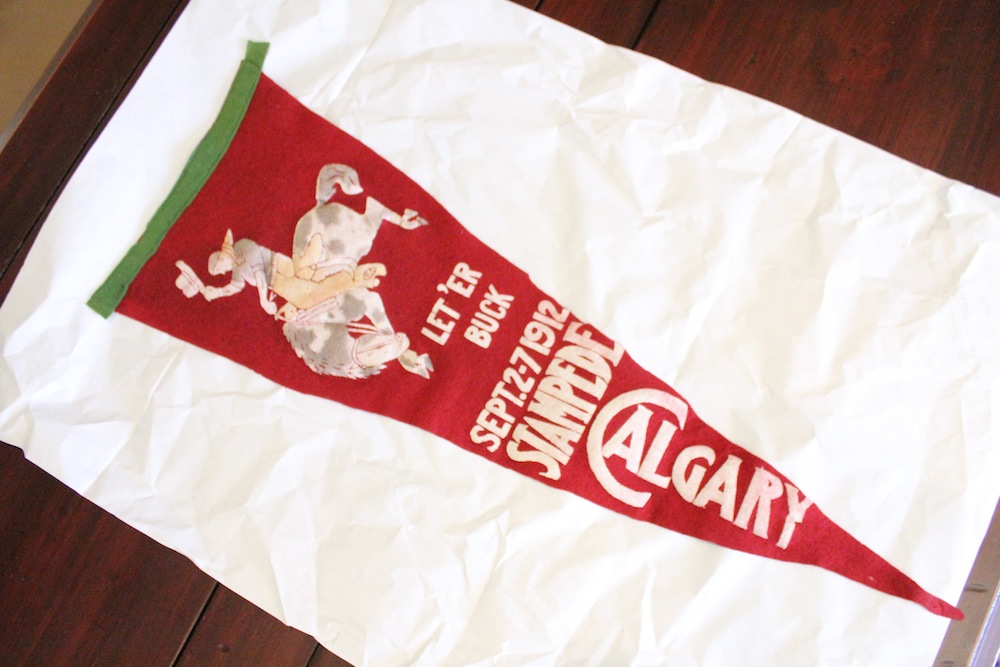 This pennant is from the first Stampede. 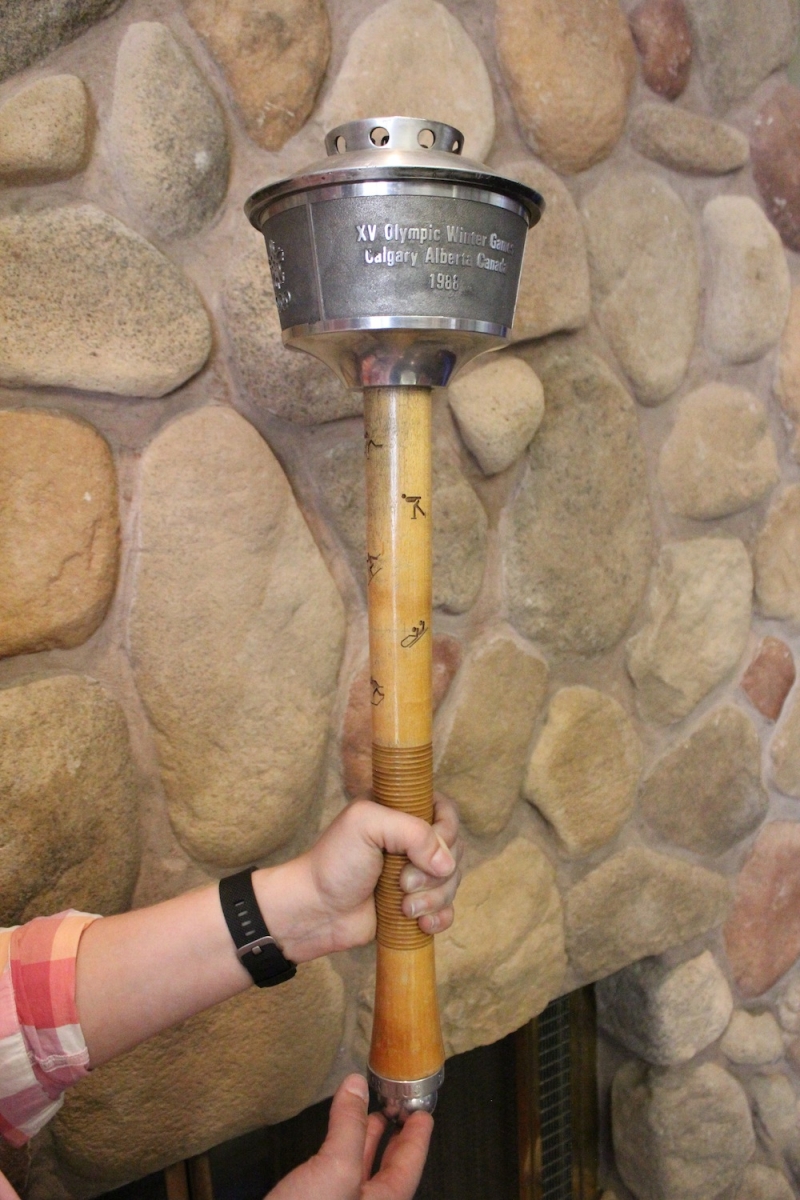 At the time, some of sites across the city had a big metal cauldrons that looked like the Calgary Tower, much like this torch. “I suspect that it was used to light the cauldron here,” says Murray. “It was lit, so it was used at some point on the trail.” An unlit torch is a rarity and thus more valuable. One was recently sold in the United States for roughly $60,000. 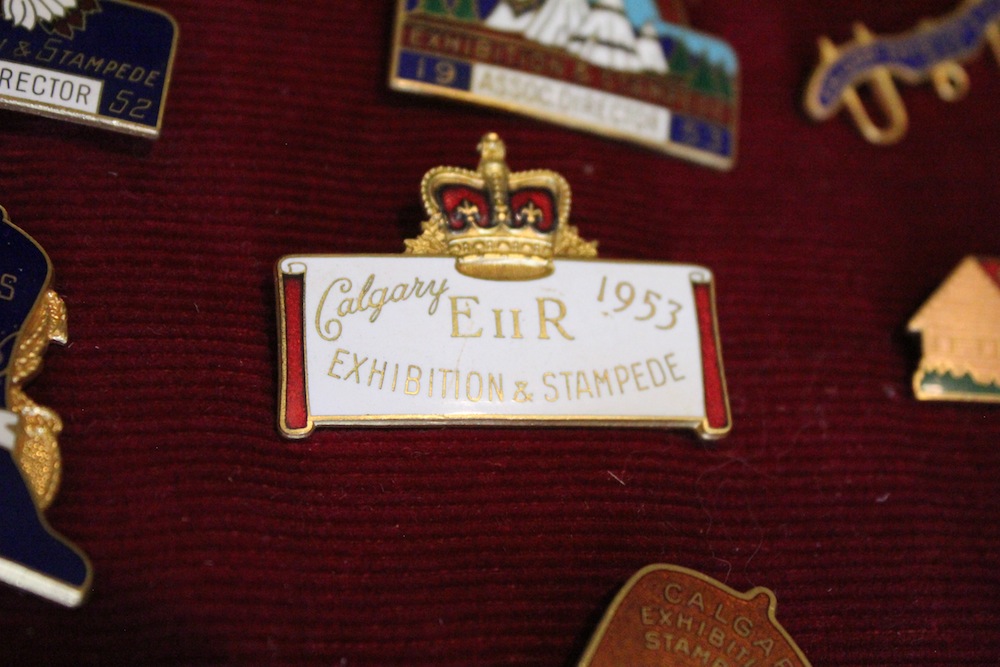 Stampede volunteers, directors, presidents and CEOs all get different kinds of pins every year. Early pins were quite ornate – some were even made by Birks. This piece is from 1953 when Queen Elizabeth II visited. It was one of her earliest visits to Alberta as Queen. 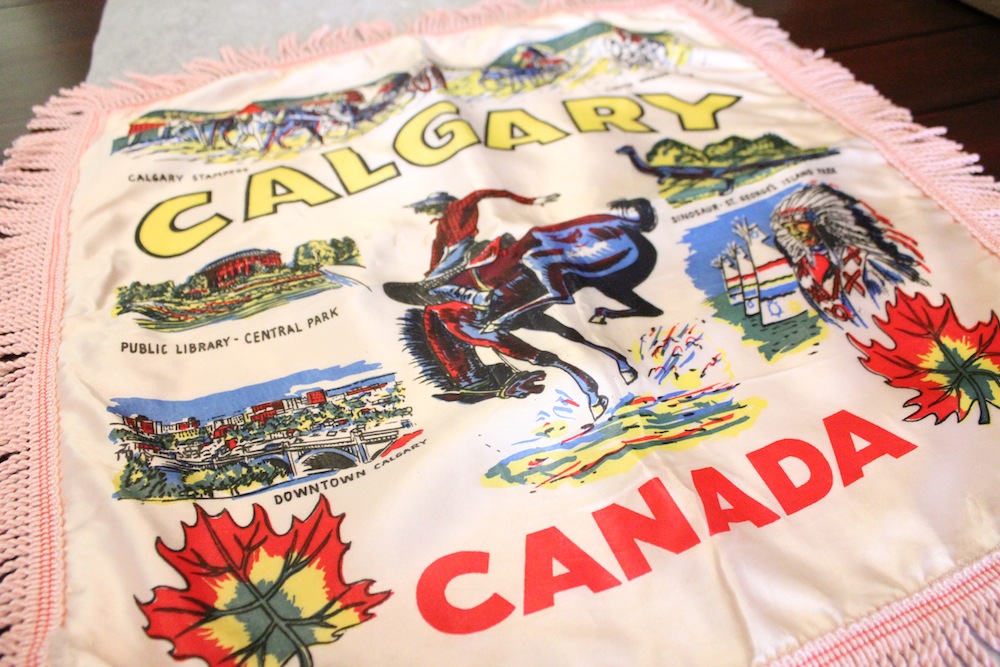 This is pillow cover from the 1950s demonstrates how, in many of the older souvenirs, it is common to see the city of Calgary highlighted alongside the Stampede. “It was as much about getting Calgary’s name on the map as about tourists taking advantage of their time in Calgary,” says Murray. “It’s special because it shows how the city and the Stampede have grown together. You see something like the Central Library, which is still obviously a pretty big landmark, alongside the bucking bronco and chuck wagons. The early souvenirs are fun to see everything working together.” 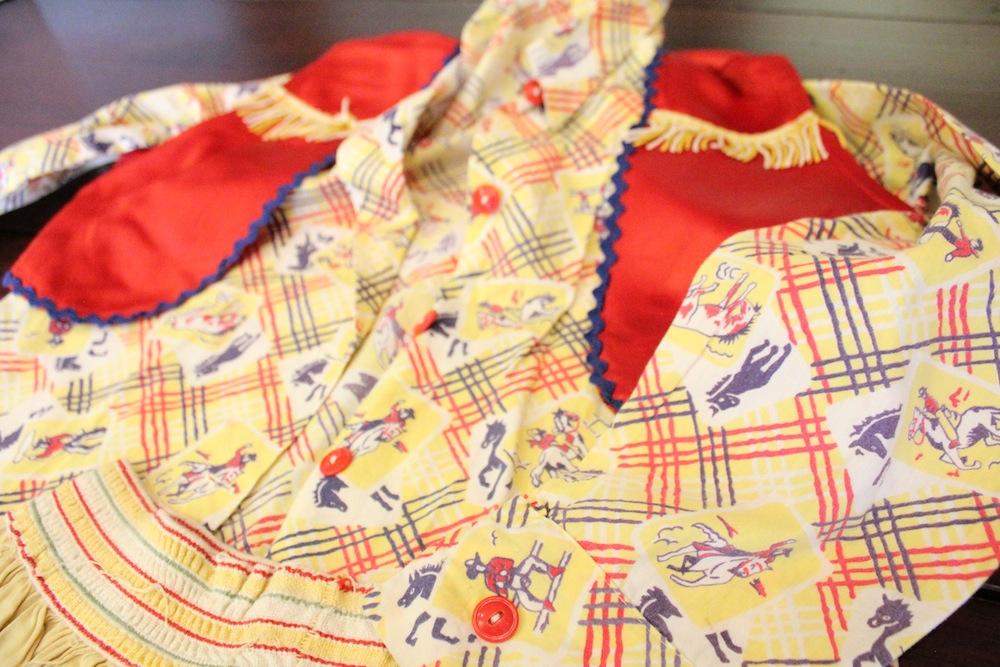 A long time tradition at the Stampede was to make (or have your mother make) your own western wear, like this little girls outfit from the late 1950s. “Guy Weadick tried really hard in the 1930s to get Calgarians to dress up. It was a way locals could really embrace the stampede,” says Murray. “It just became part of the Stampede – whether you came to the park or not, you dressed up.” 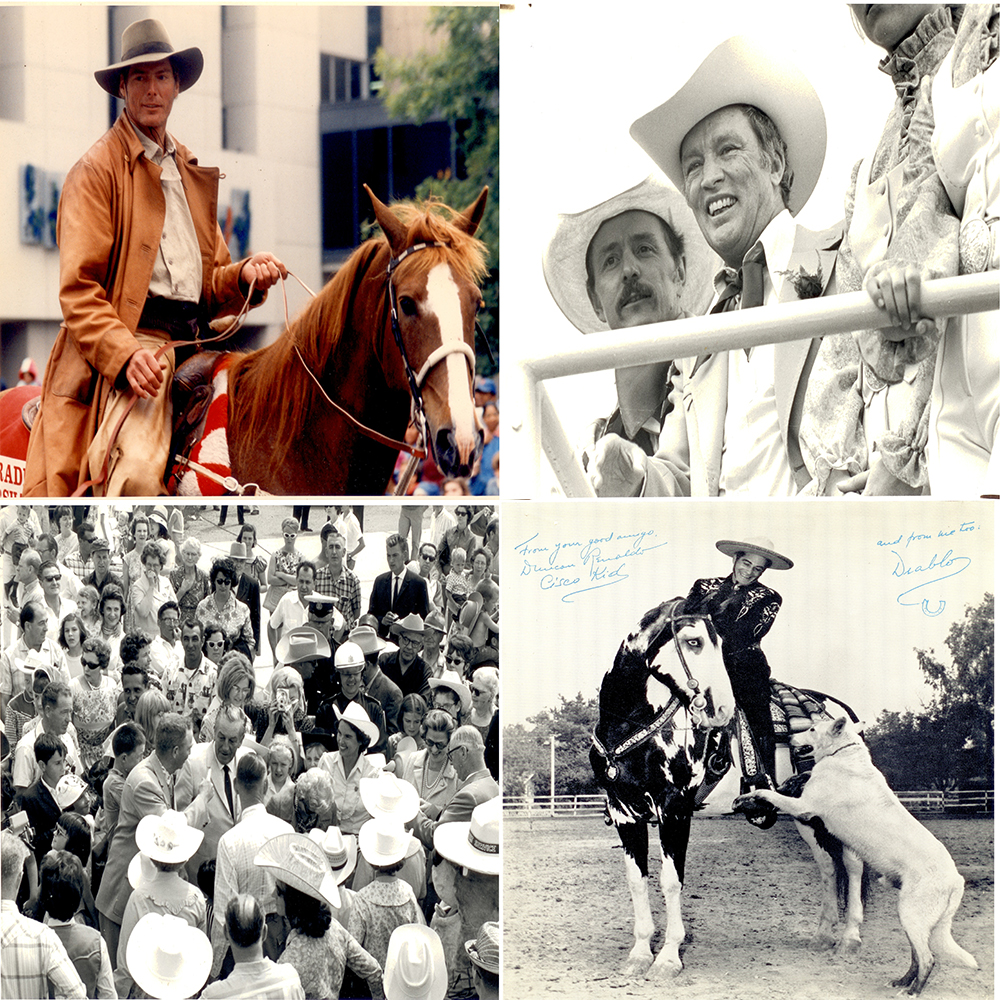 Photos courtesy of the Calgary Stampede

To see more of the Calgary Stampede holdings, visit calgarystampede.com/heritage. If you have got items you think would benefit the archives, contact archives@calgarystampede.com, 403-261-0485, or the online contact form.