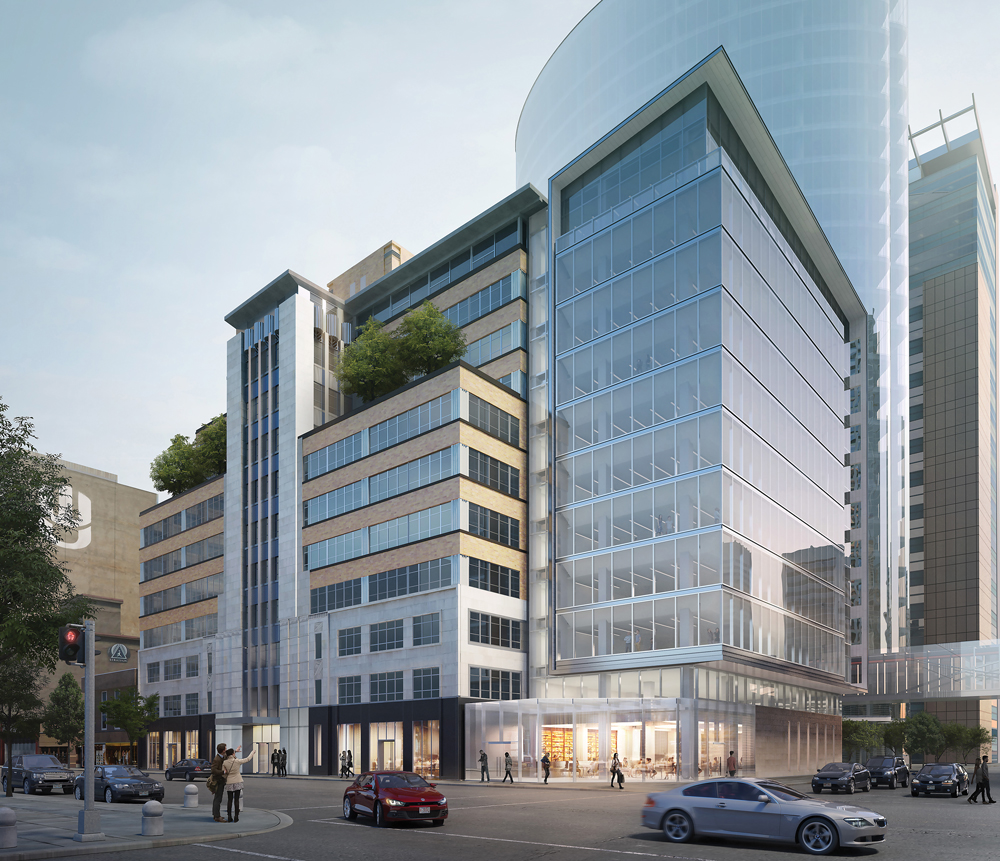 What is Happening With the Barron Building

According to the building’s current owner, come June 2017, the building will be a mixed-use space with retail, restaurant and office space.

Locally designed by Jack Cawston and built in the early 1950s, the Barron Building is currently slated for redevelopment.

When oil was discovered near Leduc in 1947, oil companies from Texas to Oklahoma flocked to the province. Leduc is less than 40 kilometres from Edmonton, and it seemed almost certain the province’s capital would be host to the influx of oil businesses looking for headquarters.

Fortunately for Calgary, lawyer and entrepreneur J. B. Barron saw an opportunity in the lack of available office space in the province and set out to remedy the situation. Two mortgages, four years and a total cost of $1.25 million later, the Barron Building sprang up from the ground near 8th Avenue and 5th Street S.W., drawing oil companies, and their revenue, to the city.

In addition to anchoring the oil patch here, the building also stands out for its classic art moderne style, designed by Calgary architect Jack Cawston. “It’s the most significant example, architecturally, of its kind in Calgary,” says Irena Karshenbaum, a Calgary-based writer and heritage advocate. “It’s a building we look back on, but really its multiple uses is how we should be building buildings right now.”

Featuring both office and retail space, the Uptown Theatre and a penthouse residential suite, the Barron building was a forerunner for “mixed-use” spaces built today.

Though the theatre space, which closed in 2012, won’t survive renovations, according to Riaz Mamdani, CEO of Strategic Group, the building’s current owner, by June 2017 the Barron building will once again be mixed-use, with retail and restaurant space on the main floor and office space on the remaining 10 storeys.

Mamdani, aware of the historical significance of the site, says he wants to move forward with redevelopment plans that will respect the significance of the building, while making it a viable space for modern use. “We want to preserve the art deco style, we want to preserve the very historical, significant aspects of that building,” he says. “But it’s also very important we make it a class-A modern building.”

Rendering of the new development of the Barron Building, slated to open in June 2017.

The majority of the new plans consist of an L-shaped building that will wrap around the existing structure to the east and north, more than doubling the building’s footprint from 120,000 square feet to more than 250,000. Strategic Group is seeking LEED platinum certification on the new building, which features a number of modern amenities including elevators, HVAC systems and utility and environmental monitoring systems.

The existing basement will be transformed into a parkade, and there are plans to link the Plus-15 system through the building, connecting it to both the Watermark Tower to the east (and, in turn, The Core shopping complex) and the Manulife Building under construction to the north.

As part of the changes, the old Chicago Chophouse location east of the building will be demolished. The Uptown marquee on the main facade will also be taken down and placed in storage, though Mamdani hopes to eventually find it a better home. “If anyone has any interest in keeping or obtaining the marquee, we’re very happy to talk with them,” he says.

Mamdani, a self-described history buff, believes Strategic Group has achieved a balance in protecting the character-defining elements of the project while making it an attractive option for modern tenants, one he hopes will give both the block and the building a new lease on life.