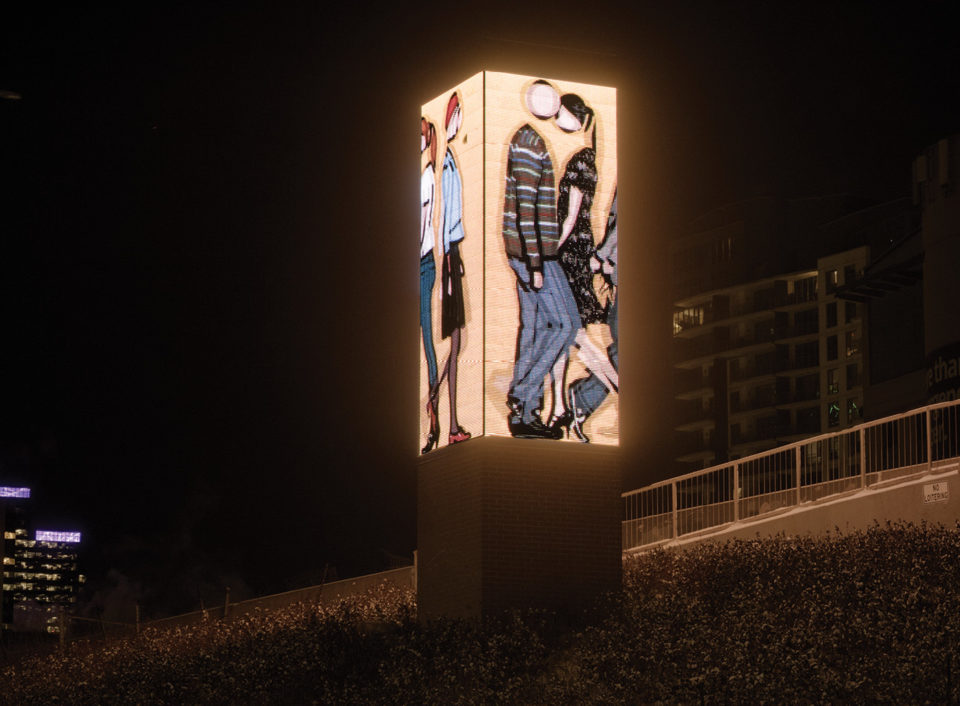 What makes a work of public art a success? Promenade, the LED tower by British pop artist Julian Opie, sheds light on the question as it comes of age as a Calgary icon.  Artistic integrity, technology and the support of urban planning combine to make a winning case.

Almost eight years ago, Opie came to Calgary to make the final adjustments to Promenade, his first venture in staging his internationally recognized animated graphics on a four-sided structure instead of a flat or two-sided screen. His original plan was for five figures to make up a cadre of city pedestrians who would walk around the tower, but once he was here, he added a sixth. Each character is based on a real person, represented in Opie’s signature simple graphic style, with animation informed by a sophisticated computer analysis of their individual gait.

The addition of the sixth figure (the fellow with the long ponytail, based on Opie’s studio assistant, Kris), equalized the representation of men and women, balanced the number of pedestrians walking in each direction and enhanced the visual complexity incrementally.  The walkers all move with their own style,  posture and pace, so an additional figure had  a significant effect on the overall choreography  of the installation. The figures overtake and pass each other in perpetual motion, but it could take years before they find themselves  in exactly the same arrangement.

The visual syncopation of Promenade corresponds neatly with the rhythms of the city. The pace of walking establishes a satisfying beat within the urban mix of movement, capturing moments in the lives of residents and visitors on the street.

Opie chose the location with the Calgary Municipal Land Corporation (CMLC) during the early stages of planning for East Village development. He saw the scrap of hillside left over from various periods of construction as a great site for an installation that could be accessible to pedestrians as well as motorists and commuters  on the flyway, CTrain overpass, roads and bridges,  as well as travellers on the river.

CMLC’s call was for an art piece that could reflect movement and time in East Village. Opie answered that call with Promenade and went a step farther by placing it in a location where people can experience it while on the move themselves. Through the careful maintenance of the LED signage technology, the lighting continues to function precisely, with a yellow that’s carefully calibrated to stand out any time of day or night.

This article appears in the January 2020 issue of Avenue Calgary.

Property of the Week: A Character Bungalow in St. Andrew’s Heights

Property of the Week: A Bel-Aire Home with Timeless Architectural Appeal