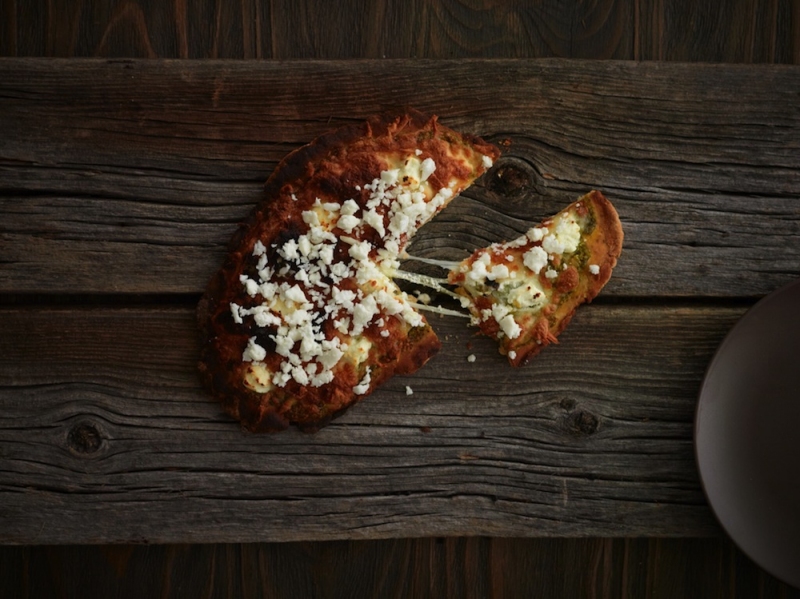 Earth Cravings will be serving up gluten-free pizza at the Symons Valley Ranch Farmers' Market. Photograph by Perry Thompson
Deep dish, Neapolitan, flatbread – no matter how you slice it, pizza in all its incarnations is one of the best foods out there. Calgarians clearly agree, as there are several new pizzerias popping up across the city, all with their own spin on a delicious classic. Here are six new pizza restaurants that have either recently opened or will be opening soon.

This California-based pizza chain is continuing its Canadian expansion with its first two Calgary locations. The menu will feature eight signature pizzas (classics like barbecue chicken, veggie and meat lovers are all there), or you can create your own pizza by choosing from the 40 available toppings, which range from applewood bacon to zucchini. No matter which you choose, all the pizzas are cooked in only 180 seconds thanks to an 800 degree open flame oven. The first Calgary restaurant will open soon in Sunridge Mall in a 2,500-square-foot space with seating for 80. The second location is set to open later this year in Mission.

Earth Cravings is all about making pizza that is good for you and guilt-free. As a result, all their pizzas are completely gluten-free and feature many local and organic ingredients. There are five different pizzas to choose from: The Incan pizza, pesto chicken, beet-za, fig and a pizza topped with roasted crickets called Do you dare?. Wash it down with a fresh pressed juice, elixir or a hot chocolate featuring chocolate and marshmallows that they make themselves. Look for Earth Cravings in the Symons Valley Ranch Farmers’ Market food court starting February 5th.

This new pizza restaurant opened this past December and is owned by husband and wife team Amelia and Joshua Stoddart, who some may know from their time working at Sugo. At Full Circle, Neapolitan-style, wood-fired pizzas are available in both classic and more unique topping combinations, including the Dr. Octo-Pi (featuring corn, seaweed, octopus and bonito flakes) and Puttanesca-Pi (with tuna conserva, capers, olives and tomato). As the restaurant’s name suggests, oysters from both the east and west coast are the other focus here.

Tony Nicastro, the current owner of Villa Firenze, will be opening a new pizza restaurant called Pza Parlour this February. Blending both modern and traditional design and practices, patrons can expect a New York style of pizza here, which is usually distinguished by its hand-tossed dough and thin crust. Grab a seat at the bar or at a table with a checkered tablecloth.

When it opens in the spring, this 800-square-foot pizzeria will offer a new takeout and delivery option to Banff Trail and nearby neighbourhoods. Owner and chef Jason Dubnewych is preparing a menu with two types of pizza. One half of the menu will feature thick crust pizzas with traditional toppings such as salami, ham, black olives, green peppers and more. The other half will feature pizzas with a thinner/flatbread crust and more adventurous toppings such as wild mushrooms, arugula, buffalo mozzarella and more. Patrons can also order salads with dressings made in-house. An official opening date hasn’t been set yet, but they hope to be open by the end of March or early April.

If you’ve ever had pizza in Windsor, Ontario, you might’ve noticed a difference in how the pizza tastes. The owners of Windsor Pizza Co. noticed it too, and opened their own pizzeria in January to bring that city’s rave-worthy pies to Calgary. So what is it that makes it so different? For starters, all the toppings are cooked on top of the cheese and meats, like pepperoni, are shredded. The pizzas are also cooked directly on a pizza stone in a gas-power oven to create a crispier crust. Customers get to create their own pizza by choosing from a list of toppings, and can either eat in (there’s seating for eight at the shop) or get it to go.