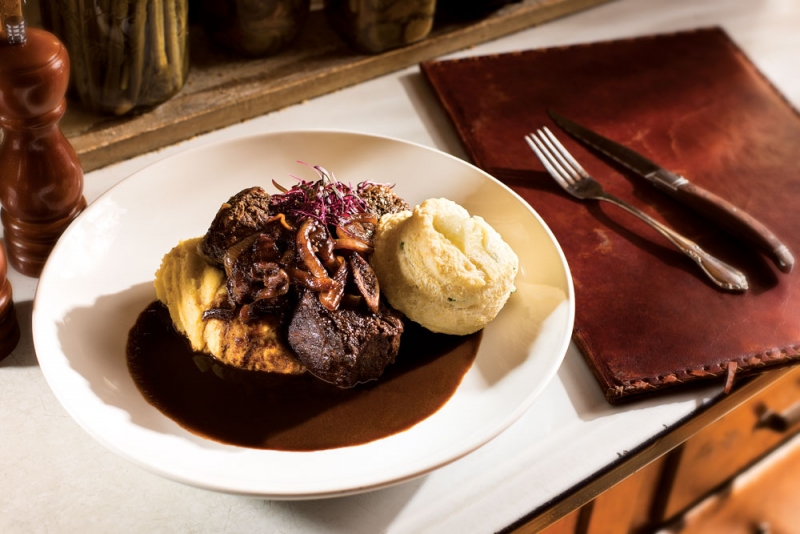 The plate set down on the table in the restaurant at Buffalo Mountain Lodge in Banff contains a fork-tender elk short rib topped with mushrooms, bookended by grilled bison striploin, sliced on the diagonal to showcase the deeply scarlet meat.

Here at Buffalo Mountain, nudged up against the staggering Rocky Mountains, dishes like this reflect the intersection between landscape and ingredient. It’s easy to connect game meats – bison, wild boar, elk and caribou – with the backdrop of the Rockies as well as the rolling foothills that connect the mountains with the open range where these animals have lived for centuries.

In mountain locales such as Canmore, Banff and Lake Louise, as well as in many Calgary restaurants, game meats continue to have a place on the menu. The roasted caribou striploin with a saskatoon berry cream sauce at the Post Hotel in Lake Louise, apricot-glazed rack of wild boar at Open Range, or elk Wellington at The Lake House all speak of regional cuisine and history – a bygone era of living off the land’s bounty, hunting and gathering, earning dinner through patience and labour.

While the bison, boar, elk and caribou served by restaurants today are farmed – a requirement for establishments to ensure a steady supply – the romance persists. These lean meats, darker in colour and deeper in flavour than their standard farm counterparts, still evoke a connection to the land these animals once freely roamed. “It’s meat that represents Canada,” says Post Hotel executive chef Hans Sauter, adding that guests from around the world often order game meat because it’s such a rarity for them.

Years ago, it was more of a gamble for restaurants to put a game meat dish on the menu as diners were less inclined to try something so foreign to them. Now, says Lake House chef Thomas Neukom, customers seek it out. Even those who are still unsure of game meat, fearing an overpoweringly “gamey” taste (which most don’t have) can opt for something more approachable like the Lake House’s elk-and-bison burger.

Open Range chef-owner Dwayne Ennest says it helps that people tend to think of game as a more ethical choice in meat because of how it is raised, as well as a health-conscious option because it tends to be leaner.

The regional aspect of game makes it a natural fit for River Caf, where the ethos is as local as possible. Executive chef Matthias Fong says the draw for him is also the tastes that are so different from more common meats. “When prepared the right way, the flavour profile really shines through,” says Fong.

The most common and widely offered of all the game meats, bison shows up on menus in the form of short ribs and tartares, in burgers and as steaks. Bison is extremely lean and dense, though less firm than beef, with a rich flavour. Tenderloins or striploins are some of the best cuts, but bison also works well in stews.

While similar to venison, elk has a cleaner, slightly sweet flavour. Compared to caribou, elk is a bigger animal with more fat on it and the meat is incredibly tender and dark red in colour, almost beef-like.

Compared to its relative the pig, wild boar has a similar pork flavour and is almost identical in texture. However, boar meat tends to be darker in colour and have a richer flavour than regular pork. And, because there is more fat in it, there’s more flexibility in how it can be prepared. The shoulders and belly, along with chops, make for the best cuts.

Though raised more wild than some other game meats, caribou has a very mild flavour, far less gamey than deer. Lake House chef Thomas Neukom says many people expect more of a game flavour and are surprised when they taste it for the first time. Like bison, it’s incredibly lean with very little fat and, although there is no marbling, it’s a very tender meat.