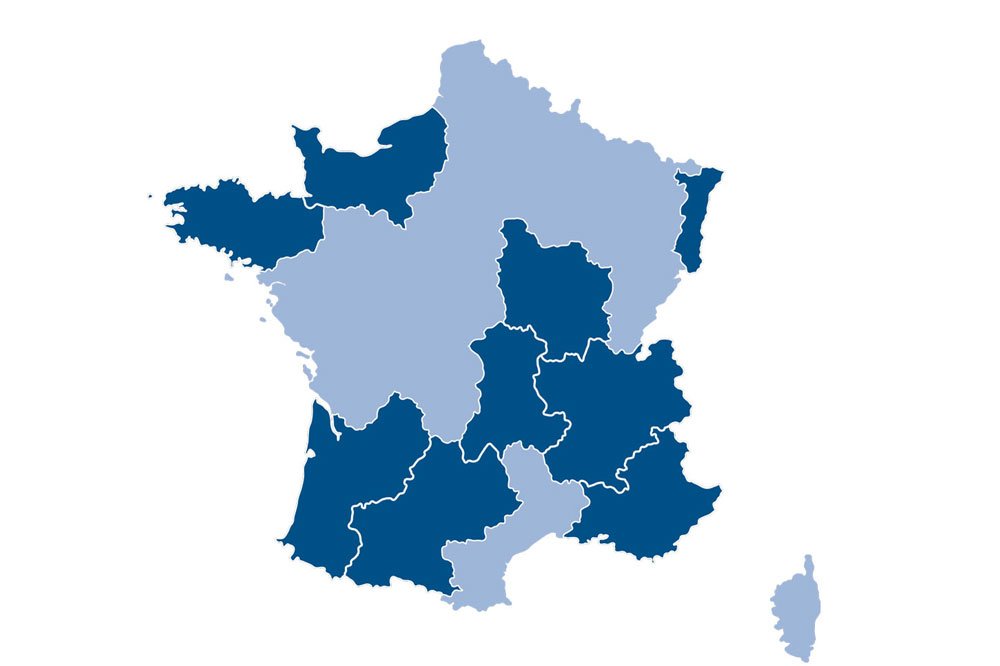 As the number of French restaurants in the city continues to grow, a little education goes a long way in enhancing your enjoyment and appreciation of the cuisine. Since a big part of demystifying French food means understanding the French geography, here’s a guide to the country’s key culinary regions.

Butting up against Switzerland and Germany, the cuisine of Alsace is notable in that it often seems just as German as it does French. Pork is plentiful in the region and is often served in the form of choucroute garnie: pork sausages or ribs served over sauerkraut. Bacheofe is another typical Alsatian dish – a robust stew packed with beef, pork and lamb with potatoes and other vegetables, all swimming in a white-wine sauce. Fish is often on deck in Alsace, either served over sauerkraut or battered and fried.

The German influence also informs the wines of Alsace – the northeast is best known for its whites, particularly gewrztraminers and rieslings. Beer also plays a role in Alsatian culture – the city of Strasbourg is home to a number of major breweries, and what could go better with a plate of sausage and sauerkraut than a nice cold lager?

Any mention of Burgundy immediately brings one thing to mind, and it isn’t food. One of France’s great wine regions, the fields of Burgundy are lined with vines of chardonnay, pinot noir and gamay grapes. With viticulture being such an important industry, it’s no surprise that wine sneaks into Burgundy’s food. Two of France’s most famed dishes, boeuf bourguignon and coq au vin – respectively, beef or chicken braised in wine – are Burgundian, as is the luxurious escargots de Bourgogne.

All of that wine seems like a waste without a little bit of cheese. Goats are plentiful in Burgundy, making for some great chvre. Some fairly indulgent cow’s milk varieties also come out of Burgundy, including poisses, soft Soumaintrain, and creamy Chaource. Since the French can make even cheese into something tastier, Burgundy is also known as the home of the gougre, those savoury little puffs made of cheese and choux pastry – which, naturally, go beautifully with a glass of wine.

The city of Lyon in the Auvergne-Rhne-Alpes region, with its bouchons (casual places to eat hyper-local food) is often considered the heart of French cuisine – the city has long been a cultural hub and acts as a crossroads for various gastronomical influences. You’ve got vegetables from the Rhne valley, beef from the region just north of the city, and poultry from Bresse – all coming together in Lyon.

Bouchon cuisine is homey, but indulgent. Fatty duck pts and various offal creations are ubiquitous, and sausages (like the tripe-filled andouillette sausage) or chunks of roast pork usually show up over the course of an evening of eating, often alongside pan-fried potatoes. One of the more classic Lyonnaise dishes is the quenelles de brochet: a giant gnocchi-like dumpling served with a rich seafood sauce. Another classic is the cervelle de canut, a spreadable cream cheese mixed with garlic and chives. Lyon is also conveniently close to the Beaujolais and Ctes du Rhne wine regions that provide a constant flow of wine in the bouchons.

Bordering Italy and sitting right on the Mediterranean, the food of Provence is influenced by the sun and the sea, focusing on fresh savoury herbs and succulent seafood. You can’t talk Provence without talking bouillabaisse – the brothy fisherman’s stew brightened with herbs de Provence and saffron. The proximity to the shore makes for other fishy delights as well, like the ever-popular brandade de Morue, a delicious concoction that involves whipping salt cod into potatoes.

The Mediterranean elements are strong – olive tapenades are prevalent in Provence and daube provenale, the region’s well-known peasant beef stew, is full of tomatoes and olives, giving it an Italian flair. Provenal cuisine also employs plenty of fresh whipped aioli, vegetable-rich soups and sweetbreads. Drink-wise, vineyards abound, producing a wide variety of wines, including some very worthwhile ross. Meals in Provence are often kicked off with a nip of pastis, an anise-flavoured liqueur that’s a favourite in the region.

The city of Toulouse and the surrounding Midi-Pyrnese region is worth mentioning if only because it is home to one of the best-
known French dishes: cassoulet. This rustic French stew feels comforting and (by North American standards at least) fancy at the same time, with its duck confit, Toulouse sausages, hunks of pork shoulder and French beans all simmered for hours in an earthenware pot.
Of course, Toulouse cuisine has more going for it than those one-pot cassoulets – the equally comforting garbure soup made with ham and cabbage is another signature dish, as is duck and goose, prepared in a number of different ways (you’re bound to find some foie gras if you’re exploring the food of Toulouse). For sweet tooths, Toulouse has a history of confectionary, with the Pav du Capitole chocolates and Cachou Lajaunie licorice drops both hailing from the city.

Make no mistake – Bordeaux is wine country. Considered one of the most important wine-growing regions in the world, wine is undoubtedly the biggest influence on Bordeaux culture and food. Bordeaux is most famed for its blended reds – made from any combination of cabernet sauvignon, cabernet franc, merlot, petit verdot, malbec, and carmnre. There are also a few white Bordeauxs, usually sweeter Sauternes.

But even the French can’t subsist on wine alone, so the Bordelais make their meals out of fresh shellfish and traditional concoctions like lobster and scallop terrine. Red meat also appears in Bordelais cooking – beef is plentiful in Bordeaux and appears in signature dishes like entrecte marchand de vin: steak fried in a simple red-wine sauce. Lamb also abounds, and is particularly delicious when prepared in Bordelaise sauce made from bone marrow, shallots, butter and red wine (also perfect with escargot). For something sweet, turn to the iconic cannels bordelais, small cylindrical cakes soaked with rum and vanilla.

Normandy and Brittany are both in northwestern France and, while the two are separate regions, they have culinary commonalities thanks to their proximity to the sea. Beyond its succulent oysters and scallops, Normandy is also known for its apples – as seen in apple tarts and, more importantly, France’s best apple cider. Normandy is also the birthplace of Camembert cheese, one of France’s most famous creamy exports.

Down the coast in Brittany, crepes and galettes (savoury buckwheat crepes) rule and can be filled with anything from bacon and cream-drenched mushrooms to a simple spread of salted cultured Breton butter. That same gloriously rich butter can be found in Breton butter cakes and biscuits or elaborate kouign-amann pastries. On the less-buttery side of the spectrum, Breton cuisine features hearty stews made of gnarly looking monkfish, mussels and other seafood. To wash it down, traditional Breton beer and mead serve as a reminder of Brittany’s Celtic heritage.