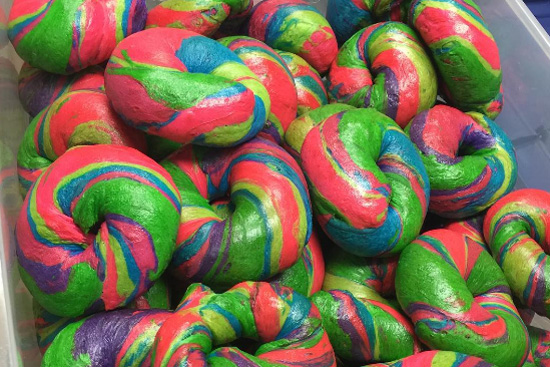 Has the colder weather and shorter days got you feeling a little down and a little dark? Maybe all you need is a fluorescent carbohydrate, schmeared with birthday cake cream cheese, to brighten things up.

Turn out, you can find such a thing in Calgary. You just need to know where (and when) to look.

Bagelino’s The Bagel Co. has been baking bright bagels since February 2016. As far as the owner, Paul Gill, knows, Bagelino’s was the first bakery to make these bagels in Calgary. Gill came up with the idea to try and make people happy during these tough economic times – he says he didn’t realize it was trending in New York City until afterward.

If you’re wondering why they cost a little more than regular bagels, know that they’re a lot of work. In the five hours it takes to make 100 rainbow bagels, Gill and his team could have made 1,000 regular bagels. That’s because to make a rainbow bagel, there’s the dying, layering and twisting of the dough, as well as all the usual bagel-making elements like letting the dough rise and the baking. Depending on the batch, the rainbow bagels will have between four and six flamboyant colours.

Pre-ordering these brilliant bagels is strongly recommended. The store is open from 6 a.m. until 4 p.m.; Gill says that shoppers who haven’t preordered will stand in line starting at 5:30 a.m. and the bagels can run out as early as 7 a.m. Call 403-265-2118 sooner rather than later to place your order.

There’s no regular schedule when it comes to Bagelino’s rainbow bagels. They’re not always on the menu because they’re labour intensive, but the company is hoping to sell them once or twice a month. Simply, when they’re on sale, you’ve got to act fast.