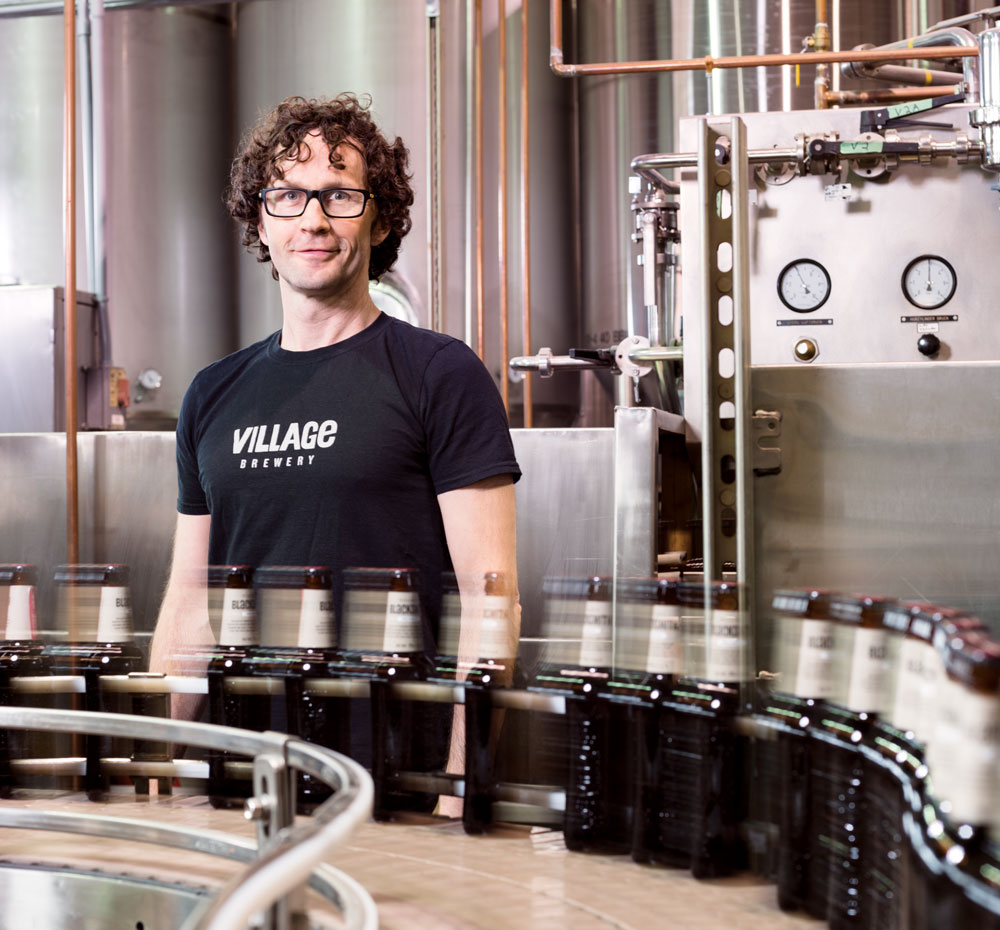 Village Brewery‘s philosophy is to gather people around community. Often the easiest way to bring people together is with the promise of a beverage or two, and a Village affair has incredibly flavourful, small-batch brews.

At just under three years old, Village is Calgary’s newest craft brewery. However, its seven founders have more than 160 years of collective experience in the Alberta beer industry, including more than 15 for Village’s go-to guy for marketing and community affairs, Jim Button.

“Our team circles all of the requirements for a brewery, including marketing, sales, plant operations, brewing, finance and business operations,” says Button, who previously worked at Big Rock.

The brewery was fully operational in December 2011, three months after it was founded. By Dec. 21, 2011, pints of Village Blonde were being sold in bars.

Its beers, such as the easy-drinking Village Wit, are made with local ingredients including malted barley and wheat. Last summer’s seasonal offering, the Village Gardener, was made with 20 lbs. of locally grown hops, mainly grown along fence posts in backyards in Bridgeland.

“Hops aren’t grown on a commercial scale in Alberta,” Button says. “We added our own bittering hops, but you can really smell the floral local hops when you open a bottle.”

This summer, four community associations, including Killarney/Glengarry, are growing hops in community gardens for Village to use in its next batch of Gardener. In exchange, Village will give the associations kegs with the promise they’ll each throw a community gathering.

“We have a philosophical desire to be meaningful and local.” Button says. “If we had growth as our driver, we’d make different decisions.”

Village has implemented its own growth barriers, Button says. Production is capped at 20,000 hectolitres; this year, it’s on track to brew 6,500. “We’re getting better, not bigger,” he says.

Village sold partial ownership “shares” to 50 “beer barons” – a variety of Calgarians, from artists to CEOs, who are strongly committed to community – and it gives 10 per cent of its bottom line back to the city. Village sponsors local events, including BIG, a multidisciplinary arts festival, and sells local art in its brewery store, and its tasting room is free for artists to use.

With a growing number of Village beer fans outside of the city, the brewery might need to change its policy of limiting sales to Calgary-based bars and stores. “We wanted the brewery to support the community of Calgary, but that may have to change,” Button says.

“I may feel guilty one day when someone from another market says, ‘I love your beer – can you support our community event?’ But I haven’t had to cross that bridge yet.”

At many liquor stores around Calgary, including Co-op Wines Spirits Beer and Kensington Wine Market.