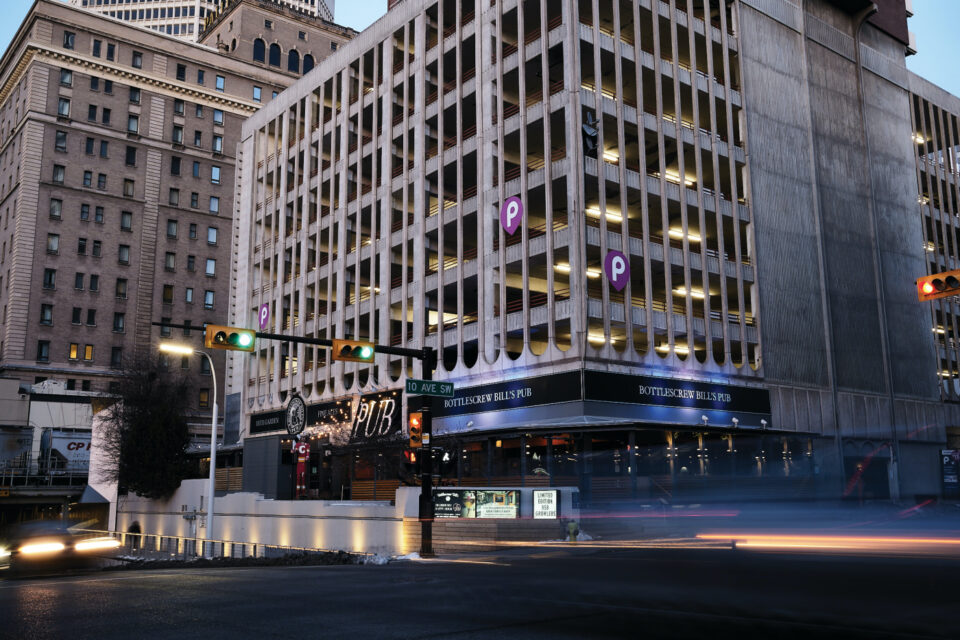 Bottlescrew Bill’s Pub is a second-generation family business that’s reached and retained iconic status. Owners Stuart and Colleen Allan opened Bill’s predecessor Buzzards Wine Bar and Restaurant on 10th Avenue S.W. in 1980, adding Bottlescrew Bill’s in the adjacent space in 1985. Four decades later, their son Geoff Allan and his sister Jennifer Stewart are running Bottlescrew Bill’s as general manager and operations manager, respectively. We spoke with Geoff and Stuart Allan about some of the milestones along the way.

Buzzards Wine Bar and Restaurant opens. Stuart, who is from the U.K., wanted a place similar to the wine bars he and Colleen had experienced in London. “That’s basically why we did it, so we could find a place where we could go and consume different wines ourselves,” he says.

Buzzards opens the first licensed patio in Calgary. A liquor board inspector told Stuart it could only be popular for two months a year. He replied, “we’ll take the two months.”

Stuart and Colleen lease the former Calgary Press Club next door and open Bottlescrew Bill’s Old Ale and Port House. “It alliterated nice with ‘Buzzards,” says Stuart. “Bill was just made up.”

The now iconic Around-The-World-In-80-Beers-Passport program debuts. Dubbed a way to “travel the world without leaving the bar,” participants try 80 different international beers over a year, keeping track of their progress in a faux passport. The list of names (and hilarious pseudonyms) of those who complete the journey each year is framed and displayed in the bar in perpetuity. An all-Alberta version of the passport has since been added.

Big Rock Brewery begins brewing the pub’s house beer, Buzzard Breath Ale – the first contract brew of its type in Canada. Since 2004, it has been made by Wild Rose Brewery.

Buzzards hosts the first Testicle Festival, bringing varieties of prairie oysters (bull testicles) onto the menu every summer since.

Buzzards rebrands to Buzzards Cowboy Cuisine, complete with a western-inspired menu. “There were wagon wheel chandeliers, a picket fence along the window,” recalls Geoff. “Total western decor everywhere. It was quite the place.”

Renovations begin inside Buzzards to match Bottlescrew Bill’s, moving the remaining cowboy decor out of the dining room. Around this time a statue of hockey legend Lanny McDonald is acquired for the pub during a renovation of Flames merchandise stores at the Saddledome. Lanny is first installed inside, then later moved outside where he and his mustache stand guard to this day.

Buzzards signage is taken down as the brand is absorbed into Bottlescrew Bill’s Pub.

Bottlescrew Bill’s patio is winterized to remain open year-round. Of the 300-plus beers served today, one has been there since the beginning: Big Rock Traditional Ale, which also launched in 1985.