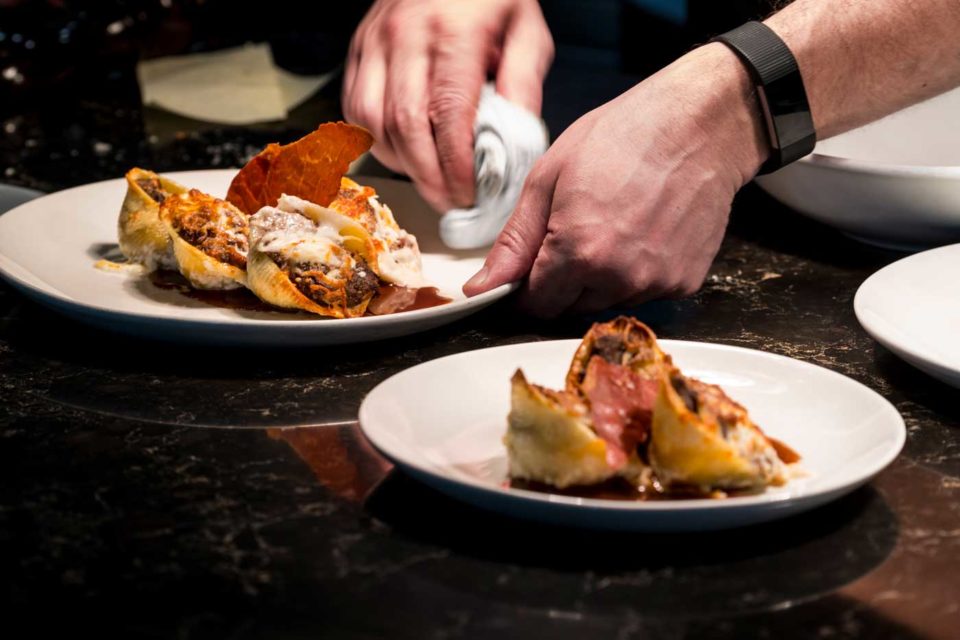 Conchiglie: if you feel like you can’t pronounce it, just say “pasta shells.” Not as ubiquitous in North American cuisine as spaghetti or penne, this pasta form is fairly common in Italy, favoured by many chefs because of the opportunity to stuff it with any variety of meats, cheeses or vegetable combinations.

Cucina’s conchiglie has been a staple at the downtown restaurant — which is part of the Teatro restaurant group — since the mid-2000s. The dish’s longevity lies in the filling: short rib braised in red wine and veal stock, which is then pulled apart (think the consistency of pulled pork) and turned into a ragout flavoured with onion, garlic and herbs.

Cucina’s version is also a riff on the classic Italian saltimbocca, which is wine-marinated meat wrapped in prosciutto and sage. Sage and wine are both part of the finished short rib’s flavour profile, and the stuffed shells are also topped with a generous piece of crispy prosciutto and a good sprinkle of parmesan. So, diners get all of that saltimbocca flavour, with the shell pasta acting as a handy vehicle. To push things even further, the dish is served in a mascarpone cheese fondue that caramelizes as the stuffed pasta crisps up a bit in the oven before serving.

To a home cook, this all may sound complicated, but Teatro Group’s corporate executive chef Matthew Batey says it’s actually relatively simple from the perspective of a fine dining restaurant.

“The food program at Cucina is meant to be peasant Italian,” Batey says. “The conchiglie is an easier noodle to stuff than ravioli or tortellini because they are like a pocket waiting for something to be put inside.”

Cucina offers the conchiglie in two sizes: $16 for three pieces or $25 for five, making it an appropriate lunch or dinner entree.