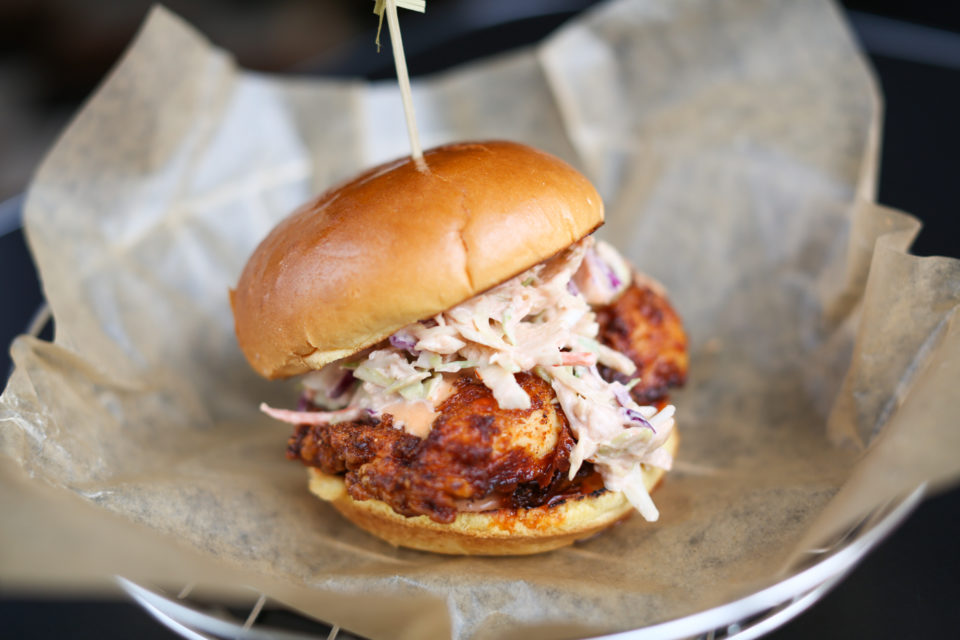 Alumni owner Jeremy Milligan dreamed up his take on a traditional Nashville hot chicken sandwich five years before he made his boozy sandwich shop a reality. Sensing the growing popularity of Nashville-style hot chicken, he knew that the sandwich would be a cornerstone of his business, but didn’t imagine it would become such a runaway cult hit.

Milligan sells about 400 hot chicken sandwiches a week — that’s around 150 more than any of the other 14 sandwiches on his menu sells in the same timeframe. While other restaurants in town have hot chicken on the menu, Alumni’s hot chicken sandwich is closer to what you’d find in Nashville, as opposed to rebranded Buffalo chicken sandwiches that are usually touted as being “Nashville hot.” What makes Alumni’s creation the real deal is the fact that it is indeed, fairly spicy — so spicy that Milligan has trained his servers to give a disclaimer whenever customers order it.

“We’ve committed ourselves to go all the way with this,” Milligan says. “This one is not going to be for everybody. And we’re going to have to have a conversation about this sandwich with each order.”

The sandwich itself consists of a five-ounce butterflied chicken breast that’s been marinated in buttermilk for at least four hours before being dredged in flour and fried. After it’s cooked, the chicken is doused in hot oil that’s been heavily seasoned with cayenne, brown sugar, paprika, garlic powder and black pepper (the sandwich can be ordered “half hot” with the oil only applied to one side of the chicken).

Alumni serves the chicken on a buttery brioche bun smeared with its creamy “comeback sauce” (as in “y’all come back now!”), which carries a bit of spice itself, but also balances out the intensity of the cayenne oil on the chicken. The comeback sauce is also the basis of the cabbage slaw that sits on top of the chicken along with one of the restaurant’s house pickles.

The Alumni hot chicken sandwich is priced at $13. Fries, house potato chips and other sides are extra.