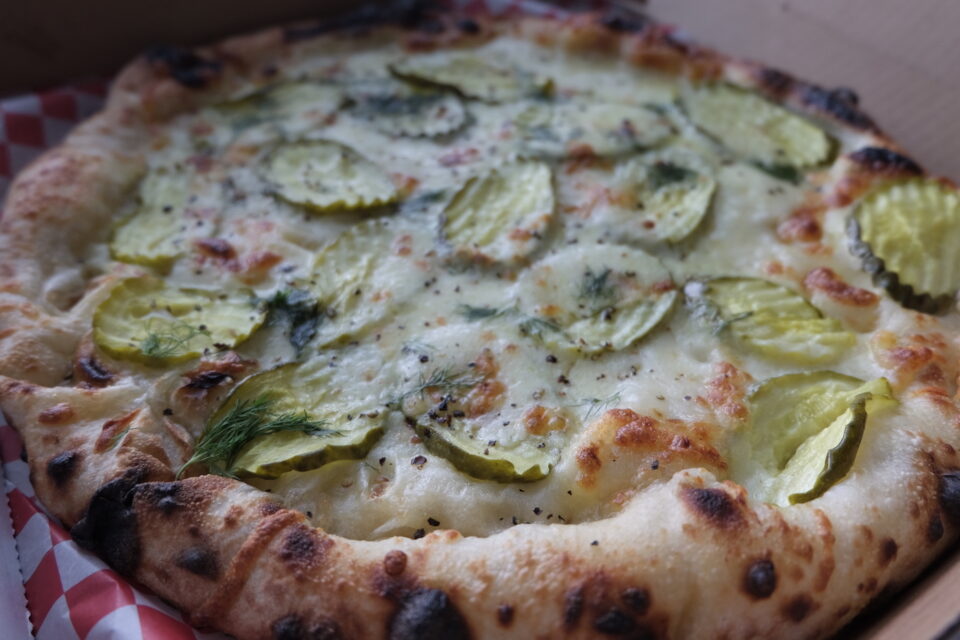 Pizza Face owners Mike Garth and Tony Migliarese run a pizza joint known for its unconventional pizzas, but even they are surprised that their runaway bestseller is a pizza with dill pickles.

“We can’t fight the pickle pizza,” laughs Migliarese. “Mike and I are purists so it’s funny that the things we sell the most are donair pizza and pickle pizza.”

“That’s the charm of this pizza — people go ‘ugh,’ but then they try it and go ‘wow, you gotta try this pizza,’” says Garth. “It’s savoury, it’s got that butteriness of the cheese and the cream and the crunch.”

Making pies that are a cross between a New York-style and Neapolitan pizza, Garth and Migliarese originally started Pizza Face as a string of pop-ups across Calgary. They used to haul around a 400-hundred pound pizza oven for pop-ups in Diner Deluxe, Cannibale, Two Penny, Tubby Dog and PinBar before holding court on Sundays at Bar Von Der Fels at the request of friend and owner Will Trow. In September, they opened in Community Natural Foods, and in the same month, Pizza Face was named one of the top 10 Canadian pizzerias by Top 50 Pizza, an international pizza guide ranked by experts in Italy.

“It’s amazing, the community support from our fellow restaurants and the Calgary consumer,” says Garth. “We’re overwhelmed by the support and the love.”

The pickle pie is the only pizza that has never left the Pizza Face menu from day one nor changed all that much from when they first started doing it two years ago at the Diner Deluxe pop-up. The garlic cream is made with hand-whipped cream, minced garlic and salt and is now a staple on their menu in other pizzas. The dough is made every night and left to proof for 24 hours, then rolled out the next day. When ordered and assembled, it spends a total of four minutes in the pizza oven.

“Low and slow dries pizza out but fast and hot keeps that moisture in there,” explains Garth. “It keeps a crunchy outside and a chewy inside.”

Migliarese adds that the pickle pie in its current state is the best it has ever been because now, their pizza dough is all made in one place. “The dough used to travel several places,” he says. “Mike used to make it at Diner Deluxe and then bring it to PinBar to roll and keep it in the Pin Bar fridge and then bring it to Bar Von Der Fels on Sunday.”

Looking back at the response they’ve gotten to the pickle pie, Migliarese and Garth say it has always been polarizing. While some people are not pickle fans, others can’t get enough. During Pizza Face’s early days, they considered taking the pickle pizza off the menu to change things up but Garth says, “We got killed on social media — people were like, ‘bring it back, bring it back!’”

For anyone who thinks this pizza is a passing trend, Garth says, “The pickle pie is not going anywhere, it’s here to stay.”