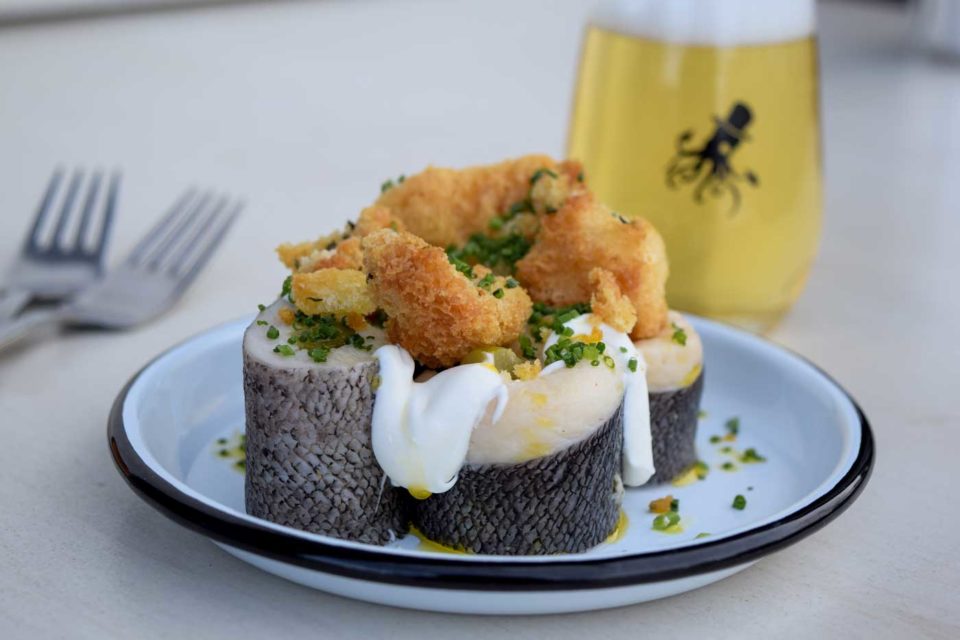 It’s a question that customers ask rather frequently in The Dandy Brewing Company’s tasting room. Rollmops — a traditional Northern European snack consisting of pickled herring fillets wrapped around a pickle or olive — are not commonly served in modern Canadian restaurants. Most of us have seen jars of rollmops in grocery stores, but likely pass by them without giving them a second thought.

This actually works in Dandy chef Merritt Gordon’s favour. Since so many of his customers don’t have pre-existing (i.e. poor) expectations of what rollmops taste like, they’re more apt to order his version, which are so much tastier than your standard pickled fish.

Gordon himself doesn’t have a particular affinity for rollmops, but knowing that Dandy originally intended to make its mark brewing traditional English ales before its brew masters turned to more experimental beers, he thought it would be fun to put some items often associated with English pub food on the menu. To make it work, he had to build a better rollmop.

“We can’t regularly get good herring here in Alberta, so the first fish that came to mind to use was Alberta rainbow trout,” Gordon says. “We use a farmed product and tried it with that. It definitely has a less offensive fishy taste.”

Gordon pickles the trout himself, using a cider vinegar and ginger pickling liquid to cure the fish. To keep things simple, he neatly wraps each fillet around a good ol’ dill pickle.

It also turns out that most people don’t eat their rollmops correctly — you’re not supposed to just pop them in your mouth, subjecting yourself to a blast of full-on pickled fish flavour. Gordon’s rollmops are served with piece of fried baguette and drizzled with a generous dollop of crème fraiche to add some crunch and balance out the acidity of the pickled fish.

The rollmops are on Dandy’s lunch and dinner menus under the “snacks” section and go for $9 for an order of five.