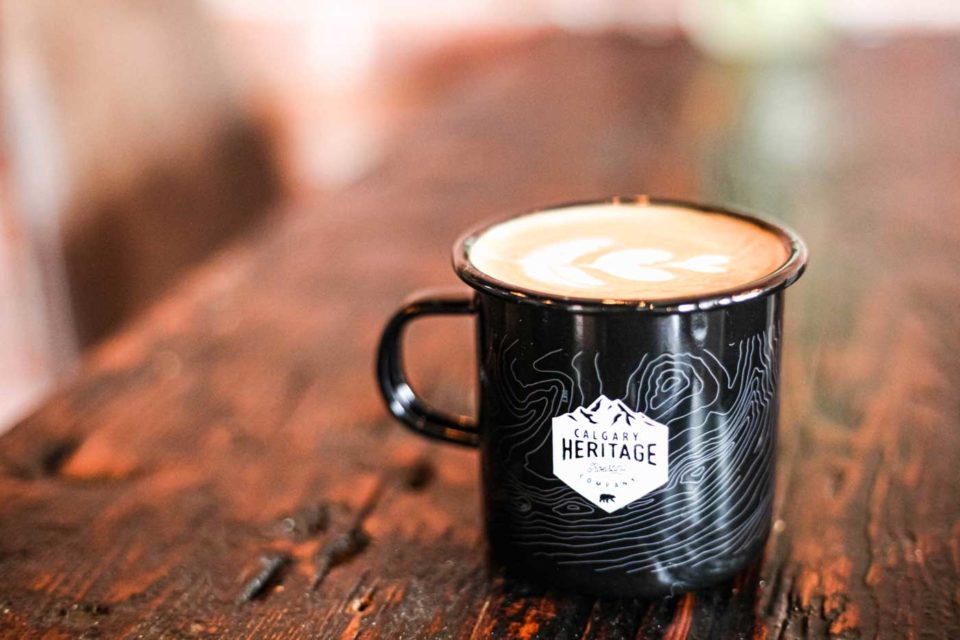 CHRC has taken up residence in Ramsay’s historic C.C. Snowdon building, which was built in 1911 and became a municipal historic resource in 2014. Wenzlawe and Parker have had their eye on the brick building as a potential home for CHRC for the last two and a half years.

“We really loved the building because there is so much natural patina and character and soul to this space,” says Wenzlawe.

That said, it took some work to get the space looking like it does now. Wenzlawe, Parker, their business partner Ali Sullivan-Lapp and their friends spent hundreds of hours getting the 2,000-square-foot, two-level space ready. They scraped and sanded paint off the wooden floors by hand, painted the walls and even made the furniture — elements like the cafe tables, the front of the coffee counter and the benches were all fashioned out of old wooden beams found in the building.

The hard work paid off, leaving them with a cozy, rustic space that balances the history of the building with the spirit of the growing local coffee company. That spirit includes letting guests get in on the roasting action — CHRC’s coffee bean roaster is on full display behind glass walls on the cafe floor and you can even buy green coffee beans to roast at home.

Naturally, CHRC’s coffee beans are used to make the cafe’s drink offerings, which include cappuccinos, Americanos, lattes, espresso and drip coffee. And those with dietary restrictions are in luck — almond and soy milk are available at no extra charge.

The cafe offers a simple yet tasty selection of snacks to munch on too. Along with Butter Block & Co pastries, there are smoothies, popcorn, overnight oats, chia pudding and three kinds of toast topped with baked beans, avocado or smashed bananas and almonds.

Parker made the cafe’s tables out of wooden planks from the building’s basement.

CHRC’s space features two safes that are original to the building. They’ve turned the safe on the main level into a storage room and the second safe is in the basement. The team used cedar planks from inside the safe to create the front of the coffee bar, the cafe benches and the window cladding.

CHRC’s coffee roaster is showcased behind glass walls in the cafe so that guests can watch the beans being roasted right in front of them.

Pastries from Butter Block & Co.,  three kinds of toast, chia pudding and popcorn are just a few of the snacks you can enjoy with your coffee here.

The stairs lead down to the basement level, which isn’t open to the public right now. Eventually, Wenzlawe and Parker may turn it into an event/meeting space.

This painting is by Michael Sydoryk of Wild Form Art. The bear represents the grizzly bear in CHRC’s logo, Bubba.

This photograph of the C.C. Snowdon building, which is nailed to the wall, was already in the building when CHRC moved in. Wenzlawe and Parker also incorporated other photos from the Glenbow archives into the space.

CHRC co-owners Mike Wenzlawe and Jamie Parker in the basement of their new cafe and roastery.

The entrance to Calgary Heritage Roasting Company’s cafe in the C.C. Snowdon building.

[This story has been updated to reflect that Ali Sullivan-Lapp and friends also helped prepare the cafe space.]