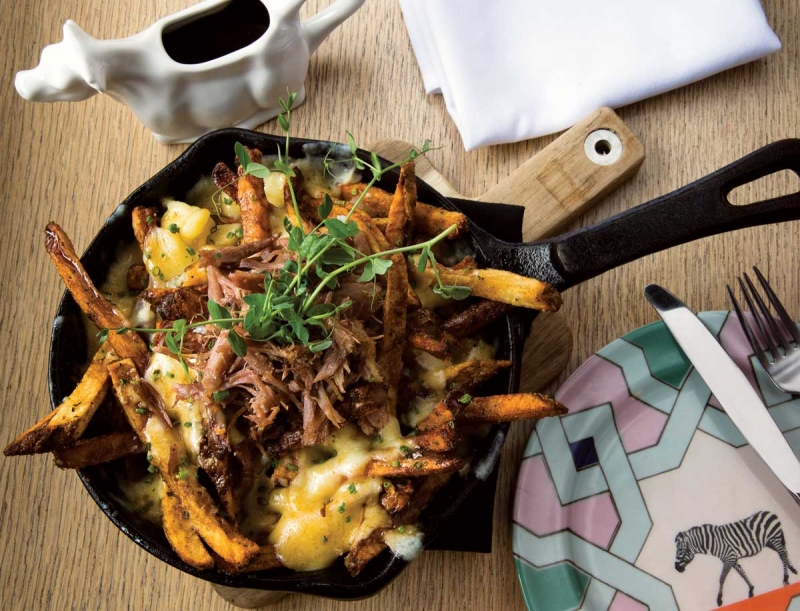 Oh Canada, if you have a national dish, it’s surely poutine. Rich gravy, squeaky curds, crispy golden fries … If there’s anything better after a brisk day on the slopes, or paired with a pint at the hockey game, we haven’t found it. So, it’s no surprise that you can find poutine at just about every self-respecting pub these days — not to mention at food trucks, fine-dining restaurants and everything in between.

It wasn’t always so. Though poutine has been around since the mid-century, it wasn’t until major restaurant chains started offering it in the early 1990s that the dish achieved truly national recognition. Before that, it remained largely confined to Québec, the province of its birth, and next-door Ontario. It was also a relatively simple (if rich) affair: fries, curds, gravy. In fact, even the gravy was an afterthought; according to most origin stories (and there are many), the earliest versions of poutine consisted of fries and curds alone.

The comfort-food revolution of the early 2000s changed all that. Suddenly, humble classics like mac ’n’ cheese and nachos were being elevated with haute-cuisine ingredients like truffles and fois gras. Poutine was no exception; chefs all over Canada gleefully improvised with everything from crab to curry.

Fast-forward a few years, and if you can eat it, it’s probably been put on fries and called poutine. There are dessert poutines and breakfast poutines, vegetarian poutines and game poutines. Purists will turn up their noses at these non-conforming concoctions, but for the adventurous, poutine is just about the perfect canvas for the culinary imagination. So where can you get your hands on some? Almost anywhere, but if you fancy a poutine pilgrimage, Calgary’s inner city is your mecca.

If you’re looking for an elevated version, look no further than Briggs and its “Newfs Poutine,” oven-finished fries topped with beautifully poached lobster and a buttery lobster béchamel sauce.

For all its elevated ingredients, Charcut’s poutine hews closely to the classic, with golden duck-fat fries and just the right amount of curds. That hint of truffle in the gravy is subtle but perfect.

In praise of pig, Last Best gives us smoky bacon gravy and crispy pig’s ear, served with a dollop of sour cream and chives. It’s everything you love about perogies, but with fries.

One of the prettiest poutines on the scene, this one features a savory pan jus and plenty of herb flavour, topped with your choice of pulled pork or duck confit. We could drink this sauce and die happy.

Just steps from Market, this French brasserie serves up darkly golden fries coated with a thick mixture of pan gravy, curds and duck confit. Somehow, the fries stay thin and crispy underneath it all.