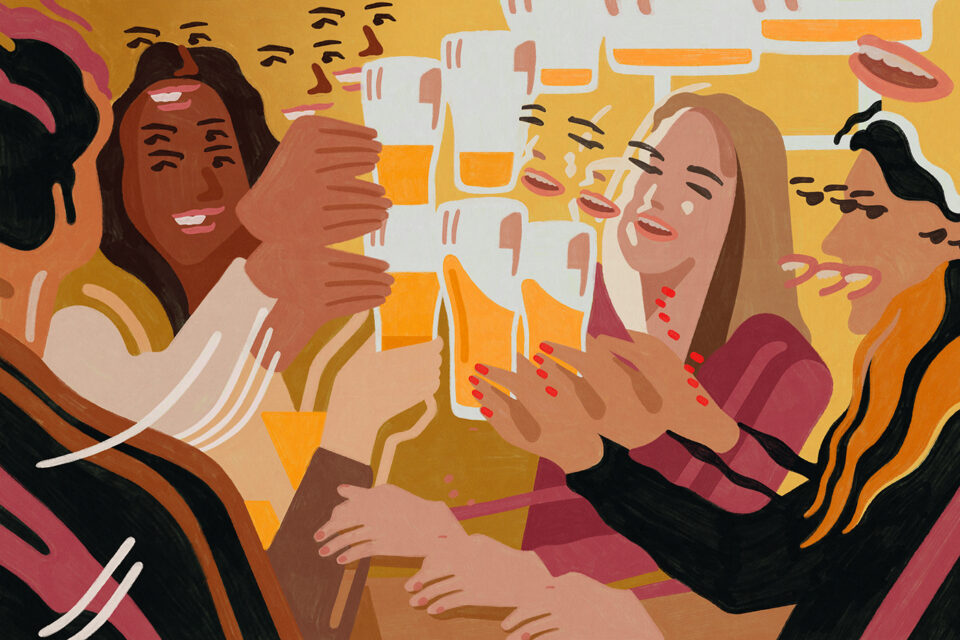 Today, the quality and variety of locally brewed craft beers is extensive. Two decades ago, however, there were a mere handful: Wild Rose’s Industrial Park Ale and Big Rock’s Traditional Ale being two of the best-known from this era.

And then, there was GoldSpur, a Belgian tripel served exclusively at the Hop In Brew, the well-loved Calgary pub that once occupied the Edwardian-era mansion on 12th Avenue S.W. between 1st and 2nd Streets, now home to the Civic Tavern after former namesake publican Dick Hoppener retired and sold it in 2018.

Hoppener knew his suds and he built a well-deserved reputation for his curated selections on rotating taps. He was also an accomplished hobby brewer who created the recipe for GoldSpur, which he served at the Hop for nearly 18 years.

Local beer snobs argued whether GoldSpur was the best tripel ever or just boozy swill. Regardless, it had a loyal following. Rumours about its alcohol content circulated among younger patrons, who consumed it as a consciousness-bending tool. Some claimed it was 11 per cent. Others 15 per cent. In truth, it was only 9.5. Many former imbibers described it as being “dirty.” Brian Smith, director of operations at Wild Rose Brewery, prefers “unapologetic.”

“You either really liked it… or it was pretty tough going,” says Smith. “It did seem to be a very polarizing beer.”

Originally from Holland, Hoppener had the same reputation. The Dutch don’t suffer fools, and some mistook his direct manner as a kind of crankiness — or, as Smith says: “He didn’t seem to spend a lot of time too worried about how people felt … about him personally.”

As a former patron of the Hop, Smith’s recollections prompted me to seek Hoppener out. After not a little investigative work from within the craft-brewing community, I managed to track him down via email. To my surprise, he readily agreed to meet and discuss GoldSpur over a cup of coffee. (It turns out he rarely drinks beer anymore.)

I was greeted by a neat, serious man in frameless glasses and classic European men’s sandals. Putting to rest my fears that the GoldSpur recipe might have been lost over the years, the former chemical engineer brought with him 11 photocopied pages tucked in a pristine manila folder, representing a comprehensive history of the beer’s creation. The first 10 showed impeccably hand-printed recipes with dates and page numbers in the top right-hand corners, depicting experiments with names like “Two Guns” and “Little Gem.” I was soon lost in the technicalities of it all, and, as Hoppener described the impact of a half-kilo of primary sugar on alcohol content, I blurted out my big stupid question: Why increase the alcohol content so much? He laughed: “It’s simple! To get drunk!”

The final page was the typewritten recipe that Hoppener eventually gave out to contract brewers. “He needed a commercial brewery to produce [GoldSpur] to retail it out of the pub,” Smith says. Alley Kat Brewing Company in Edmonton brewed the first commercial batch in 2001.

Though the recipe represents GoldSpur’s final formulation, Hoppener continued with his experiments. “[Once] we took the sugar out, replaced it with honey,” he said. The result had a startling and emotional effect on his patrons. “It caused crying,” Hoppener said. He only produced four kegs.

In its final days, GoldSpur was brewed by Wild Rose, where it finished its run in 2018. After the pub changed hands, a few kegs lingered at Wild Rose. The brewers aged the leftovers in oak barrels and it sold briefly in liquor stores under the Wild Rose label.

Hoppener bought a couple of bottles. “It didn’t taste like GoldSpur,” he said. When the kegs were empty, GoldSpur disappeared. Hoppener doesn’t make beer anymore, instead choosing to spend his retirement gardening and brewing mead. He’s let his masterwork go quietly. “We did that, and we’re proud of it, and it’s the past,” he said. “Sometimes things go by. That’s life.”

The next day, on Hoppener’s recommendation, I visit Two Pillars Brewing on Centre Street, where owner Boaz Leung and brewer Jeff Justason create Belgian-inspired beers in small batches. Unlike chefs, brewers are known to share recipes openly. While I sip a sampler of Golden Strong, Two Pillars’ signature tripel, Leung and Justason pore over Hoppener’s recipe. Neither has heard of GoldSpur before, but Justason declares it a classic Belgian “danger beer.”

Leung chuckles when I tell him Hoppener thinks Golden Strong isn’t quite “dirty” enough. He explains that Two Pillars makes cleaner-tasting beers that introduce the Belgian style while still appealing to a broad range of palates. But I really like Leung’s tripel, and, as I finish my sampler, I start to wonder if it’s a sort of reincarnation of GoldSpur: more polite, more approachable, but still invoking happy memories of a beer that was just a little wilder.