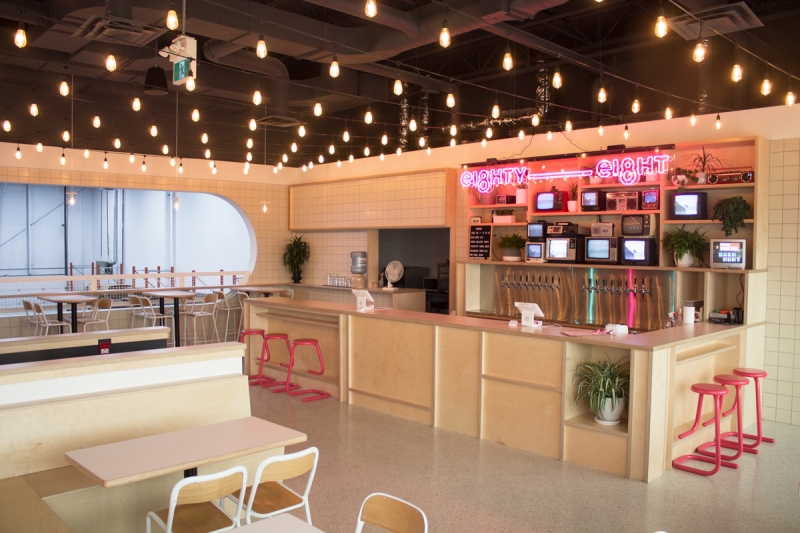 Calgary’s brewing scene shows no signs of slowing down. At least seven new breweries opened in Calgary in 2017, and in 2018, that number has more than doubled. Here’s a look at some of the city’s newest breweries you should check out.

A post shared by BornColoradoBrewing (@borncoloradobrewing) on Jun 24, 2018 at 11:11am PDT

This brewery in southeast Calgary celebrated its grand opening at the beginning of June. The front of the brewery has a garage door with windows, letting in natural light while you sip on brews like the Guns Out stout or golden ale. Order a flight of beers to stay or grab a growler for home.

Located in the Barley Belt, Cabin Brewing Company’s space hints at the memories of a beloved family cabin with features like a canoe light fixture and some cabin-like booths for seating. Co-founder and head brewer Jonas Hurtig (formerly of Wild Rose Brewery) has whipped up the four beers that are currently on tap, which include a Retrospectrum pale ale, a Super Saturation NEPA, and Sunshine Rain IPA. There’s also a nitro hibiscus tea and nitro hazelnut coffee. Order a flight to try all four brews with a South Island Pie Co. meat pie or a soft pretzel.

You may have visited The Dandy Brewing Company’s previous location in Vista Heights, but have you checked out it’s new (and significantly larger) space in Ramsay? Open since April, the brewery’s new facility features a new tasting room decorated with locally made art and posters. With up to 20 beers on tap, guests can try staple and seasonal brews like Dandy in the Underworld oyster stout, The Dandy wild sour ale, the Dead Moon Night imperial stout and more. Chef Merritt Gordon created the food menu, which includes bar snacks such as pickled eggs and oysters, as well as a hot dog with daikon slaw, spaghetti carbonara with smoked oysters, sweet potato ceviche and more.

Read more: The Local Brewery That Offers a Dandy Dining and Drinking Experience

Inspired by Calgary’s stint as the host of the 1988 Winter Olympics and the general awesomeness of the ’80s, Eighty-Eight Brewing Company is a fresh and unique addition to Calgary’s brewing scene. Grab a seat in the upper or lower level taproom to try delightfully-named beers like the Hologram white ale, the Tiffany rosé saison or the Duotang dry-hopped sour. If you can, try to stop by on a Friday or Saturday night, as that’s when local pizza pop-up Noble Pie will be at the brewery making New York-style pizza each week. Starting at 5 p.m., you can order a slice or a whole pie of cheese or pepperoni pizza (and sometimes a weekly special) while the dough lasts.

Read more: This New Brewery is Inspired by the Calgary Winter Olympics and the 1980s

This new brewery and cidery in Crescent Heights is focused around military history, and you’ll see hints of this everywhere from the wall murals in the taproom to the names of the beers and ciders. Try drinks like the War Horse Citra pale ale, the Enigma Machine honey cream ale or the X-6 Approachaberry cider. If possible, try to grab a seat at the bar, which features a frost rail on the counter to keep your beer or cider cold. Elite also offers a food menu that includes flatbreads, sandwiches, nachos, chicken fingers and more.

Good Mood Brewery has been cranking out its signature beers (a cream ale and India pale ale) since opening in southeast Calgary earlier in 2018, and recently introduced a new porter to its offerings. Visit the taproom to try them and, if you’re there from Thursday to Saturday, ask about booking a $15 brewery tour.

Inner City Brewing Company opened its new taproom in the Beltline this past fall. The brewery’s line-up of beers includes  the Hub & Spoke Vienna lager, the Bridgelandia blonde ale, the Victoria Park porter, the 800 Block New England style IPA and seasonal, infused flavours that change regularly. While there are a few snacks available, Inner City doesn’t serve full meals. Instead, guests can order-in food or bring something from home to munch on.

Legend 7 Brewing Company started brewing beer late in 2017 and was offering it through local retail stores and restaurants. But in September, it opened its own taproom in the Barley Belt. On tap, you’ll find Legend 7 brews ranging from the Temptation IPA to the Serpens Pilsner. There’s also a small but mighty food menu featuring items like pierogi poutine, wonton nachos, pear and arugula grilled cheese sandwiches, the Legend 7 burger and more. And if you’re wondering about the brewery’s name, it speaks to significance of the number seven, from the seven deadly sins and saintly virtues to the seven wonders of the world.

This year, several new breweries popped up in Calgary’s Inglewood, Ramsay and industrial areas. But at long last, the Altadore and Marda Loop communities got a brewery to call their own with the opening of Marda Loop Brewing Co. this past August. Step inside the early 1900s-inspired space and order a flight to try some of the brewery’s signature beers, which include the Casablanca blonde, the Jenkins grapefruit ale and the Marda Station IPA. The brewery recently expanded its food menu to include made-to-order fries with unique sauce options, wings, a Montreal smoked meat platter and a chocolate chunk or ginger snap cookie by Cookie Occasion topped with ice cream.

In 2018, New Level Brewing has brought brews like its Reaper’s Choice west-coast style IPA, Black Metal nitro breakfast cereal stout and Imperial Wizard’s Revenge strawberry milkshake IPA to the Fairview area. Keep an eye out for some new holiday beers — New Level is kicking things off with the Krampus Christmas eggnog stout in its taproom.

O.T. Brewing Company opened its sports-themed taproom in southeast Calgary on July 28th. Grab a seat at the bar (where a frost rail along the counter will help keep your drink cool) and try a pint of the Bush League Pilsner, the Flagstick Hazy Pale Ale or the 5 Hundie Hazy IPA.

Before this summer, Ol’ Beautiful Brewing Co. used the brewing facilities at Cold Garden Beverage Company and Boiling Oar Brewing Company to make its beers, which were offered in local retail stores and restaurants. But as of this past August, the local microbrewery has opened its own taproom and brewing facility in the former Smithbilt Hats building (which just happens to be right next door to their friends at Cold Garden) in Ramsay. One of the first projects for new architecture and design studio Fort Architecture, the space was inspired by co-owners Chris Carroll and Devon Sidwell’s love of a Japanese aesthetic called wabi-sabi. The large taproom, which has a 150-person capacity, features concrete blocks, rusty steel panels and industrial lights mixed in with light wood counters, leather chairs and plenty of plants. The team also wanted guests to be able to experience and see the brewing process, so the facility is set up so guests can peek into the brewery’s cold room and see the tanks. Thanks to the work of brewmaster Zoei Thibault, Ol’ Beautiful offers several beers on tap including staples like the Pegasus pale ale and the Gatekeeper Belgian chocolate stout.

This 12,000-square-foot brew pub opened its doors this past summer and has been whipping up staple and seasonal brews like its IPA #2 and coconut brown ale in its on-site microbrewery. There’s tons of seating, so bring along a few friends for a beer and some barbecue. Prairie Dog has a giant red smoker known as Clifford, which is where they make thee Texas-style barbecued meat for their platters of chicken, ribs, pulled pork and brisket. The menu also features dishes like soft pretzel bites, a shareable poutine, sandwiches, burgers and more. The family-friendly brew pub also has a small kids menu.

Red Bison Brewery was one of the first new breweries to open in Calgary in 2018. Swing by its northeast taproom to try brews like the Party Pants pale ale, Star Fall white IPA, Alta Mira stout or Dog’s Best Friend session amber. While there’s never really a bad time to visit, Red Bison does offer a happy hour deal on weekdays from 3 p.m. to 5 p.m. and all day on Sundays. There’s also a small selection of paninis and charcuterie boards in case you’re hungry.

This new craft brewery arcade has been a popular hangout since it opened in Inglewood in late July. It’s basically a brewery, bar and arcade facility all in one. Buy some tokens to play the more than 20 pinball machines and arcade games or stop by on a Wednesday to play the pinball games for free. You can also nosh on everything from empanadas and wings to pop tart ice cream sandwiches when you need a break.