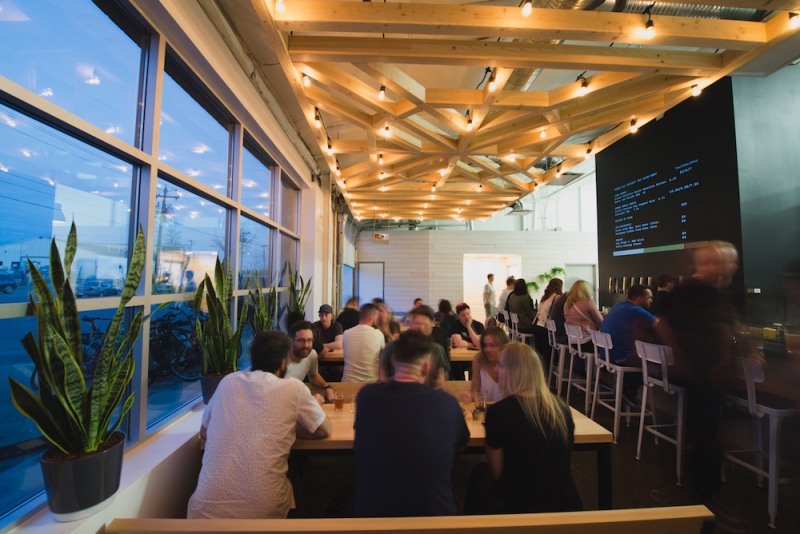 2017 was a huge year for Alberta’s beer scene, and Calgary played a considerable part in that. This past year, seven new breweries popped up across the city, and several more are scheduled to open next year. Here’s a look at some of the newest places to grab a beer in Calgary.

Annex Ale Project officially opened its doors in the Manchester area back in May. The 3,600-square-foot brewery has a bright tasting room with lots of bar and table seating where you can enjoy a pint with some friends. Stop by to try core beers like the Bitter Division North American Bitter and Metes & Bounds XPA, or one of the limited edition small batch beers. These can be paired with snacks like hop potato chips and string cheese. You’ll also want to try Annex Ale’s two craft sodas. There’s an all-natural root beer and the recently launched ginger beer. Click here to read more about Annex Ale Project.

Named after a type of 15th century ship used by Portuguese and Spanish explorers, Caravel Craft Brewery opened earlier this year in the Airport Crossing area in northeast Calgary. The brewery currently offers beers like its Captain’s Log German pilsner, the Dead Ahead Irish red ale or the Hazy Horizon hefeweizen in its tasting room. Brewery tours are also available on Sundays (email in advance to register).

A post shared by Citizen Brewing Company (@citizenbrewingcompany) on Dec 7, 2017 at 11:40am PST

Citizen Brewing Company opened on September 8. The 3,200-square-foot brewery is owned by Scott Oliver, John Papoutsakis (owner of Sophies Pizza) and Ric Cutillo (owner of Midtown Kitchen & Bar). The brewery offers its own brews like the Session Ale, the Northwest Pale Ale, the Highjacked IPA and the Tank 4 Saison, as well as some guest taps. The beers are available in sleeves, pints or flights. Citizen is also a 50-seat brew pub, and makes the food in its own food truck outside the brewery. Order at the bar and they’ll bring you dishes such as the Citizen Burger (with topping options like pineapple, fried egg, pulled pork and more), macaroni and cheese, cubano and chicken sandwiches and kale caesar salads. There’s also sides like hush puppies with maple butter, baked beans, potato salad and more.

Definitely the most unique addition to Calgary’s beer scene, Cold Garden Beverage Company opened in Inglewood this past January. The owners had some fun putting their own stamp on the building, which is home to a brewing area and an approximately 2,000-square-foot tasting room. Colourful pool noodles cover the glycol lines and one of the bars, gold chains support the taplines and the tap handles are covered in astroturf. While there are tables and bars to sit at, try to snag one of the couches. The beers are just as unique as the space, with options the Vanilla Cappuccino Porter, the Cakeface lager (it actually tastes like cake thanks to the use of vanilla beans) and an Irish red ale called Red Smashed in Buffalo Jump. Stop by for a brewery tour, to fill up a growler or order a flight-ski (four small glasses of beer served on piece of a ski). Click here to read more about Cold Garden Beverage Company.

Paddy’s Barbecue & Brewery makes sure you can satisfy your hunger and your thirst when you visit. The brewery and eatery just recently opened its doors on December 8, making it the newest addition to Calgary’s dining and beer scene. Paddy’s has its own on-site brewery where it makes an IPA, multigrain pale ale, pilsner, black lager, Vienna lager and more. There are also guest taps, kombucha and root beer from Annex Ale Project. Food-wise, you’ll find a lot more than just the usual bar snacks — the barbecue menu includes smoked meats like beef brisket, turkey breast and smoked chicken wings paired with sides of baked beans, coleslaw or kale Caesar salads.

Railyard Brewing, which opened its doors at the end of November and celebrated its grand opening on December 9, is another very new addition to Calgary. The brewery currently makes a lager, pale ale, IPA and nitro stout, which you can try in its taproom in northeast Calgary. It’s a big, open space with lots of seating that overlooks the brewing area, so be sure to bring some friends.

Brothers Mark and Kirk MacDonald have turned their love of beer, sci-fi and comic books into Zero Issue Brewing. Open since July, the 52-seat taproom is decked out with a Donkey Kong-inspired wall behind the bar, framed comic books on the wall and stacks of comics to peruse while you drink. Even the microbrewery’s name is comic-related, referring to the #0 comic book issue that provides the back story for a series. Each of the brewery’s five canned beers (which have a cool sci-fi design courtesy of Winnipeg artist Scott Ford) have their own subsequent issue numbers. Stop by the taproom to try a pint or flight of the five brews on tap: Cryostasis Pils, Multiverse Pale Ale, Nemesis IPA, Dystopia White IPA and Terraform Porter.