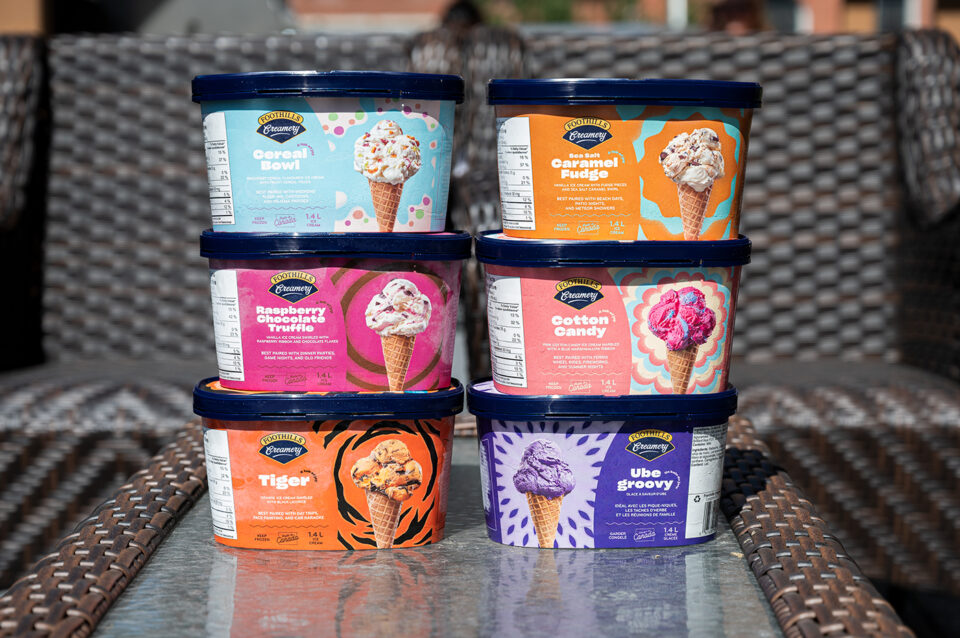 Calgary-based Foothills Creamery has been making ice cream for decades, and in that time, the company has added more than 80 ice cream, soft serve, sorbet and sherbert flavours to its repertoire. Now, there are officially six more.

Recently, Foothills launched six new flavours just in time for summer: Cereal Bowl, Cotton Candy, Groovy Ube, Sea Salt Caramel Fudge, Raspberry Chocolate Truffle and Tiger. In the name of journalism, we had to try them to see how they stacked up. While your top favourites may differ from ours depending on personal tastes, you can’t really go wrong with any of these options.

And if you haven’t had a chance to try these new flavours yet, don’t worry — all six will be part of Foothills’ list of permanent, staple flavours that you can buy in local grocery stores.

Read on to find out where your favourite new flavours landed.

Featuring a cereal milk ice cream base with fruity cereal pieces sprinkled throughout, this ice cream is inspired by the flavours you’d find in your morning bowl of cereal. While we personally thought the ice cream’s base flavour leaned more towards vanilla than cereal milk, this is an enjoyable flavour and we appreciated how the cereal pieces brought some extra texture to the ice cream.

When you taste this brightly coloured flavour, the first thing that immediately hits you is the strong, sweet and nostalgic flavour of pink cotton candy. Then, you start to taste the more subtle blue marshmallow ribbon flavour, which we are happy to report really does taste like marshmallow. One Avenue team member remarked that the flavour was “not what I expected, but in a good way.” While this flavour might be on the sweet side for some people, kids would probably rank this flavour even higher.

With its vibrant colour, this purple yam ice cream has a great wow factor when you open the lid. Groovy Ube seemed to be the least sweet of the six flavours, which our team appreciated, and had a great after-taste. The team agreed that this would probably be a flavour that everyone in the family would enjoy.

This rich, caramel-forward flavour came in at a close second with its fudge pieces and sea salt caramel swirl in a vanilla ice cream base. We really enjoyed the contrast that the chunks of fudge brought to the flavour, and as one person happily noted, “They didn’t shy away from the salt, which some caramel ice creams do.”

While this wasn’t the flavour our team initially predicted would win, it was a clear frontrunner from the moment we tasted it. A vanilla ice cream with raspberry ribbon and raspberry chocolate flakes, this ice cream perfectly balances the sweetness of the raspberry flavour with rich chocolate chunks that weren’t too sweet and just the right size.