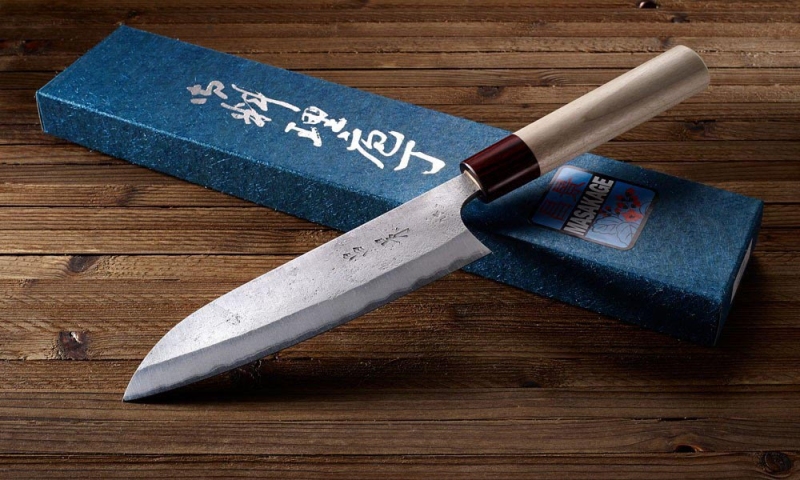 Japanese knife-maker Masakage includes a five-yen coin in all its boxes to address superstitions. Image courtesy of Cutting Edge Knives.

Being careful around knives is something of a no-brainer. Sharp pointy metal things shouldn’t be taken lightly, but folk wisdom would have us believe they’re dangerous for a whole host of reasons aside from the obvious. Old wives tales tell us that gifting a knife to a friend will cut that friendship short, and giving a knife to a lover is said to ensure your love will be cut down. So how can you give your loved one the paring knife she’s been hinting at without ruining your relationship?

Kevin Kent, owner of Knifewear, a specialty knife store in Inglewood, says he deals with these superstitions daily. “People ask about it all the time,” says Kent. “The story goes that if you give a knife as a gift, you sever the relationship, and nobody wants that, so the trick is you put some money in the knife box, and the person uses it to buy the knife from you. It’s a great loophole.”

If you’re thinking of giving that perfect knife set as a gift, but don’t want to dig through your couch cushions for loose change, certain companies, like Parker River Knife, include a penny taped to the inside of every knife box. Japanese knife maker Masakage includes a five-yen coin with every box as well, both as a nod to this belief, and as a traditional Japanese token of good luck.

Of course, you can always assume the Finnish custom that knives, especially outdoor, belt knives, are a gift of honour. But wouldn’t it be way more fun to explain why there’s bus fare included with that boning knife?