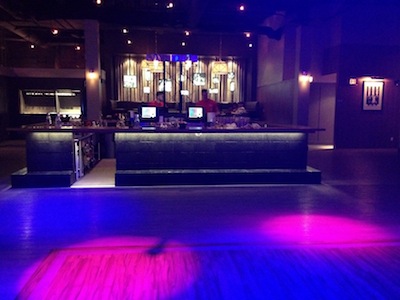 The former Back Alley Nightclub wasn’t exactly known for “atmosphere.” Located just off of scenic Macleod Trail next to a Hooters and a bunch of quick-cash money lender storefronts, the expansive bar ended up with a handful of derogatory nicknames, none of which are appropriate to mention here.

After running the bar as the Back Alley since 1991, owner Doug Rasberry closed the doors back in February of this year to revamp the operation. The space has now relaunched as Marquee Beer Market and Stage, a restaurant-nightclub hybrid bisected by a retractable wall (not to be confused with the Marquee Room, the quirky live-music venue at the former Uptown Cinema).

The whole place has been given a serious spit-and-polish – the nightclub side now sports a raised VIP seating section, as well a raised stage in front of a smooth new dance floor. The restaurant side has banquette seating around a central bar and is decorated with vintage photos of rock ‘n’ roll royalty. The menu includes beerhall-trendy bar snacks like maple-balsamic popcorn and charcuterie boards. The brews are priced at $6 for a 14-oz glass; $8.50 for a 20-oz glass and $13.25 for a quart.

The nightclub side of the new Marquee Beer Market & Stage.

As for the music, Marquee will pretty much pick up where the Back Alley left off, bringing in ticketed rock and hip-hop acts (they recently hosted Wu-Tang alumni Method Man and Redman) as well as touring EDM DJs. On music nights the middle wall will remain open, on nights when there’s nothing going on in da club, the wall will be in place, and the venue will function like your average pub-restaurant. Either way, it’s a big improvement from the Back Alley.