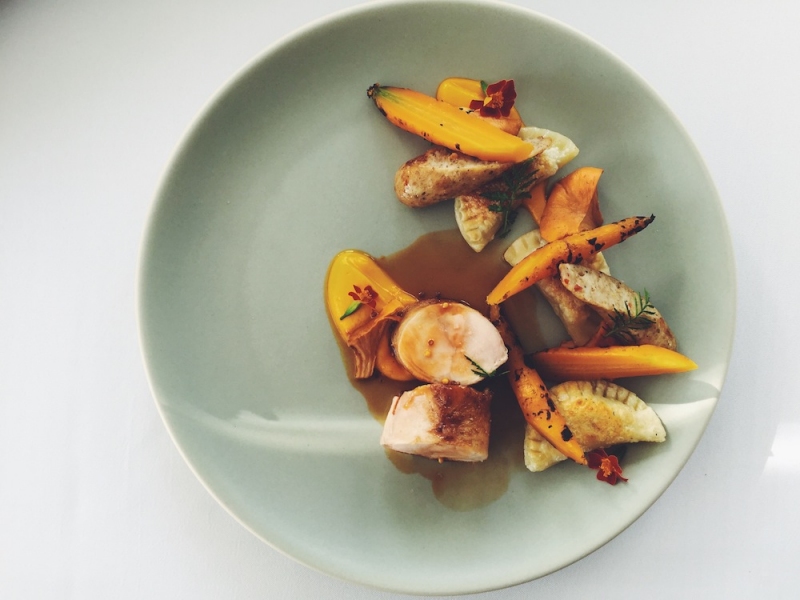 The roasted Driview Farms rabbit saddle, made with braised rabbit perogies, pickled chanterelles and buttermilk carrot puree, is on the dinner menu at Deane House. Photograph by Madeline Needles.

With its bright red exterior and green roof, Calgary’s historic Deane House has been a presence by the Inglewood neighbourhood for more than a century. For the last few years, it’s been sitting quietly at its site at the west entrance to Inglewood while undergoing renovations – all part of a process to send the storied building onto the next phase of its already long life.

Originally built in 1906 for Captain Richard Deane, who was the superintendent of the North West Mounted Police at Fort Calgary at the time, and his wife, the home was moved to its current location in 1929. In 1978, it was declared a Registered Historic Resource. Over the years, the house has been turned into a boarding and rooming house, a gallery space and a restaurant, which closed in 2012.

In mid-September, this piece of local history opened anew as a 100-seat, full service restaurant run by Sal Howell and the team behind River Caf.

While the home’s exterior may look pretty much the same, those who visited the previous restaurant prior to it closing in 2012 will be in for a surprise. The interior of the house has been completely re-done, and now features a Tenement Bar, an outdoor patio, an enclosed verandah, an upstairs library with its own bar that will be used for private events and a beautiful garden room that looks out at the front yard and flower gardens.

With several references to Captain Deane in the decor, the house has almost developed a personality itself. According to Howell, a large metal horse head on the wall references Deane’s horsemanship and role in the mounted police. Upstairs, the library is filled with books that date back to the home’s era. Even some of the bar’s cocktails, like the Palmy Days and Foibles & Sins, are named after entries made by Captain Deane in his journals.

“Locals and visitors alike can tap into the story and the history of the surroundings,” Howell says. “We very much pay tribute and honour the opportunity that we have on such an extraordinary historic site to continue to make it current and relevant to new generations of people learning about what we think of as ground zero to the settlement of Calgary as a city.”

Heading up the kitchen is executive chef Jamie Harling (formerly with Rouge). Deane House offers a menu centered around Canadian cuisine with an emphasis on regional, seasonal and sustainable ingredients (some of which come from the house’s own edible gardens).

With any luck, not to mention the winning combination of a Canadian-focused menu and a historically significant setting, the new restaurant will be a long chapter in the next phase of the Deane House’s life.