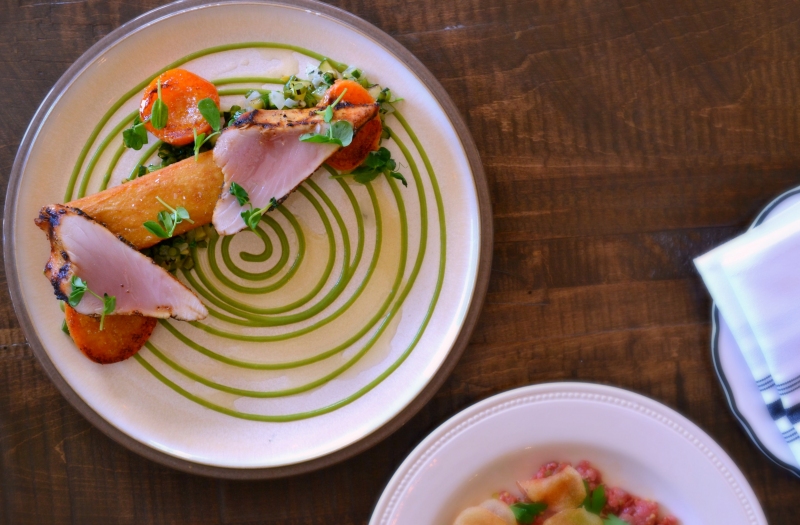 Growing more and more rapidly over the past decade or so, Airdrie is certainly no longer the tiny town it once was. With a population of more than 60,000 (as of the city’s last municipal census), there’s never been a better reason for dynamic independent restaurants to consider opening up shop north of Calgary. Earlier this summer, Hayloft became the first contemporary and chef-driven eatery to call Airdrie home.

A lot of the buzz around Hayloft can be accredited to chef Jason Barton-Browne, formally of the Teatro Group. After working for the group for years – most recently heading up the kitchen at Teatro – Barton-Browne decided to take on this new role in Airdrie with the restaurant’s owner, James Hoan Nguyen, also a Calgary food scene alumnus. Between the two of them, they bring a lot of creativity to the city’s dining scene, which primarily consists of chain restaurants, casual pubs and family establishments.

The name Hayloft suits the concept of the restaurant well. There is plenty of reclaimed barn wood to create an refined rustic ambiance. Refinished long slabs of wood are used for banquet seating along the wall opposite to Hayloft’s open kitchen while small wood panels of teal and sea foam decorate the eight seat bar that’s topped with a bright white marble countertop.

Further embracing the refined farm theme, Barton-Browne’s menu is all about beautiful, local (as possible) Alberta ingredients to create dishes like beef tartare with house pickles, mushroom tapenade, mustard and potato crisps or bison “pemmican” (think of it as a jerky of sorts traditionally made by North American aboriginal tribes) with puffed wild rice, brassica mustard and bannock.

Stepping outside of the province, as most restaurants do to find fresh, sustainable seafood proteins, the chef also cooks up a nice plate of fish and chips using ling cod with kohlrabi slaw and tartar sauce and a show-stopping plate of seared albacore tuna. Served up with a spiral of fresh-tasting mint pea puree, grilled apricots, diced summer squash and garlic scapes and chickpea panisse (similar to a firm polenta using chickpeas instead of ground corn), it is bold and vibrant and absolutely a must-order here.

A thoughtfully simple dessert like the warm Saskatoon berry bread pudding made with ginger-spiced brioche and a honey creme anglaise is a perfect way to cap off a meal here. And, even though the wine menu is fairly short, the restaurant’s bar is well-stocked so an aprs-meal cocktail of your choice can be whipped up without a problem.

Seeing Hayloft open up to a warm welcome in Airdrie is a good sign that more unique dining options should be popping up there in the coming months. Here’s to hoping!

(note: Hayloft is also open for weekend brunch, as well as lunch throughout the week. Closed Mondays.)