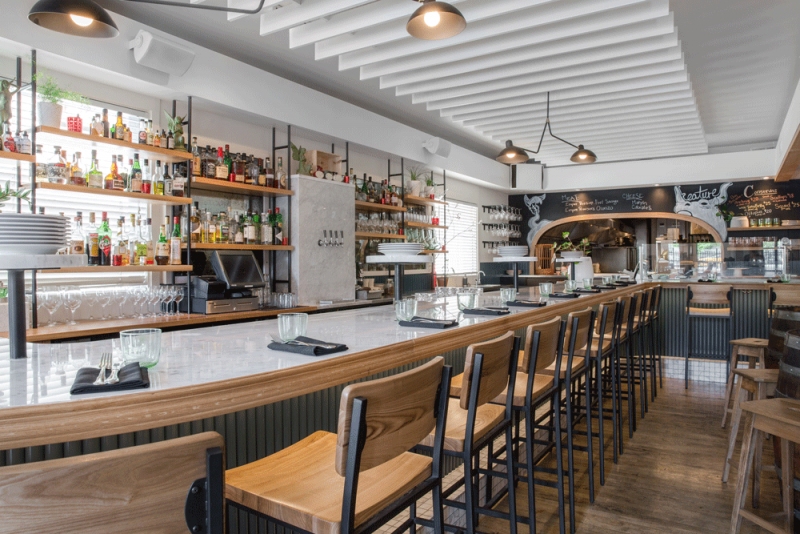 When the BMeX Restaurant Group first opened Ox and Angela several years back, it was conceived as a place to grab a cocktail while waiting for a table down the street at their other restaurant, the ultra-busy Una Pizza + Wine. Inevitably O&A became a thing of its own, thanks to a selection of delectable tapas plates and other Spanish fare. But with the restaurant split into two sides with separate “personalities,” the concept proved to be confusing to customers, despite the tasty flavours being pushed out by both the kitchen and the bar.

Hopefully that confusion is fully quelled now that O&A has reinvented itself as Ox Bar de Tapas. The location is the same, the menu is still tapas-driven, and BMeX is still involved (though now in partnership with general manager Nathaniel Krieger), but everything else has been overhauled. Gone are the two opposing sides – Ox is now a single cohesive room, with a design inspired by eateries in Barcelona.

Not only is the space more inviting, the kitchen has also upped its tapas game under the leadership of new executive chef Kai Salimki. Tapas plates can be ordered la carte or as part of the Spanish Table tasting menu – a holdover from the Angela days. Ox still makes what is arguably the best patatas bravas in the city, but Salimki has revamped about 80 per cent of the menu, adding dishes like bacalao (salt cod and potato cakes) and pulpo frito (fried octopus tentacles). And, as to not further eschew its origins, Ox still pours a respectable cocktail, with an emphasis on specialty gins and Sherry.