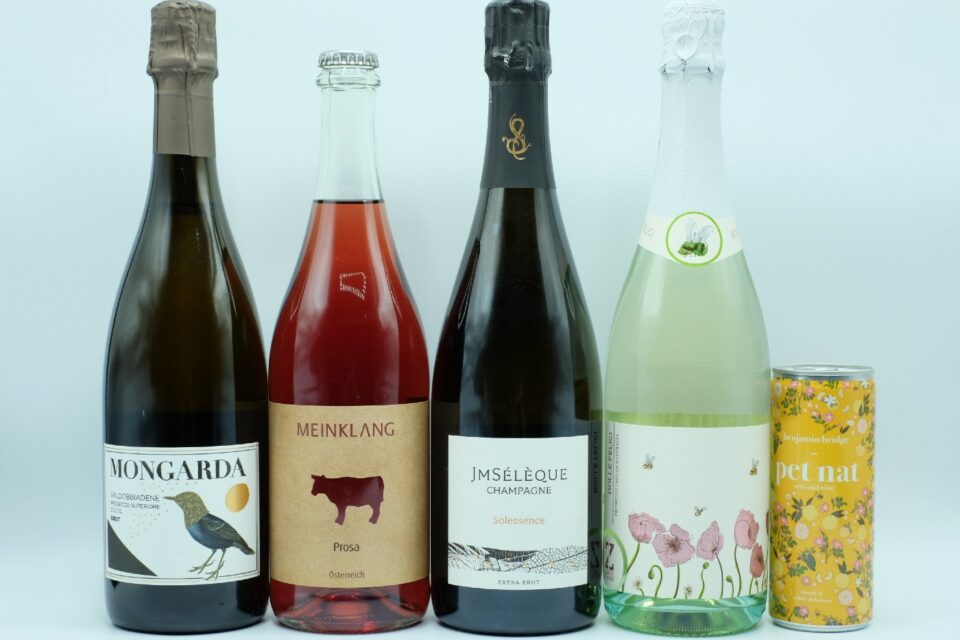 While beer gets the lion’s share of love from those who enjoy a drink on a hot day, a crisp glass of bubbly is also a satisfying way to break the heat. We spoke to five of Calgary’s independent wine and spirits stores to get some expert picks for sparkling wines perfect for summer weather. Some wines on this list are stocked in limited quantities, so if something catches your eye and turns out to be sold out, ask the staff to make a recommendation for something similar.

The team at Bricks recommends the St. Cyr Pet Nat ($35.95), a pétillant naturel — an unfussy method of carbonating wine that creates lower-intensity effervescence — made with Gamay grapes from Beaujolais. General manager Erin Loader says it’s “slightly off-dry and dangerously crushable.” Loader also suggests the full line of A Sunday in August piquettes (from $13.95): rosé, white and red, each available in cans and bottles. Piquette is a low-ABV, sustainably minded beverage made from pressing the pomace used to make wine a second time. It’s little less intense in flavour than wine but with beautiful effervescence — think of it as the Lacroix of wine, in a good way.

This wine stalwart has wines for all occasions and a hot summer day is no exception. Try the Bastets Cava Brut ($21.99) that pairs well with cheese. While Prosecco is often regarded as the king of casual bubbles, Spanish cava deserves just as much room on your summer wine list. Organic and vegan, the ​​Sperling Vineyards Speritz Pet Nat ($23.99) combines notes of pear, peach, grapefruit and lychee with a stony minerality. Lastly, Dumangin Cuvee 17 ($59.99) was once named by Forbes as one of “the best Champagnes you’ve never heard of.” It’s a newer bottle from this winery that dates back to the 17th century, made from chardonnay, pinot noir, pinot meunier and 33 per cent-reserve wine.

Market Wines has two Italian and two French bubblies in mind for your summer fun. The Val d’Oca 2019 Rive di San Pietro Prosecco ($24.95) exemplifies Italy’s most famous style of sparkling wine. Val d’Oca is known for offering a wide range of Prosecco and this one is suited to summer due to its dryness (though there’s a pinch of sweetness) and floral notes. The other Val d’Oca Prosecco on the list is the Melissimato ($49.95), sold in magnum (1.5 litres) format. Recommended for the beach and sunshine, the Melissimato is fruit-forward and totally dry.

As for French, the first on the list is the Maison Rosier NV Blanquette de Limoux ($19.95). Made by a family winery that used to be located in the Champagne region, this wine uses the Mauzac grape that is quintessential Limoux. Market Wines’ website suggests pairing it with an appetizer spread. A more premium French option is Domaine Ogereau Brut de Schistes ($36.95) from the Loire Valley. It is a blend of Chenin blanc and chardonnay with a distinctive frothy texture.

Vine Arts recommends five different refreshing kinds of bubbles. The Austrian, biodynamic winery Meinklang’s sparkling rosé Prosa ($26.33) is made with 80 per cent pinot noir and 20 per cent is regional grapes Blaufrankisch and Zweigelt. Nova Scotia winery Benjamin Bridge’s canned pet nat ($12.67 per 250ml) is a light, refreshing sparkler made entirely of Geisenheim. Zonte’s Footsteps NV Bolle Felici Fleurieu Prosecco ($23.92) has “happy bubbles” (bolle felici) right in its name. According to Vine Arts, it’s a Prosecco from an Australian winery made with Glera, the standard Prosecco grape. “Don’t overthink food, setting, or ambiance. Just drink it,” the Vine Arts site says. The other Prosecco suggested by the team is Mongarda Prosecco Superiore Brut, a natural wine with strong fruit flavours. Finally, a capital-C Champagne worth a few extra dollars: JM Sélèque Solessence Brut Champagne ($47.95). It is a blend of four grapes and, according to Vine Arts, has notes of brioche, meringue and Meyer lemon.

The biggest splurge wine on this list comes from Willow Park. The Amour de Duetz Blanc de Blanc 2007 ($299.99) is a Champagne made entirely of grand cru chardonnay. Willow Park describes it as “a softer style” of Champagne with notes of brioche, apple and citrus. Another French wine it recommends at a more casual price-point is Chateau de Targe Saumur Brut Rosé ($28.99) from the Loire. One of just a few rosés on this list, it’s made from cabernet franc and has a complex array of fruit flavours. For an Italian sparkler that doesn’t start with a P, try Villa Sparina Sparkling Gavi ($28.49). Made with cortese grapes from the town of Gavi, the predominant flavours here are of the stone fruit variety. Last, a wine closer to home: the Red Rooster Brut ($28.49) from the Okanagan. It’s an easy-drinker made of chardonnay and pinot noir.