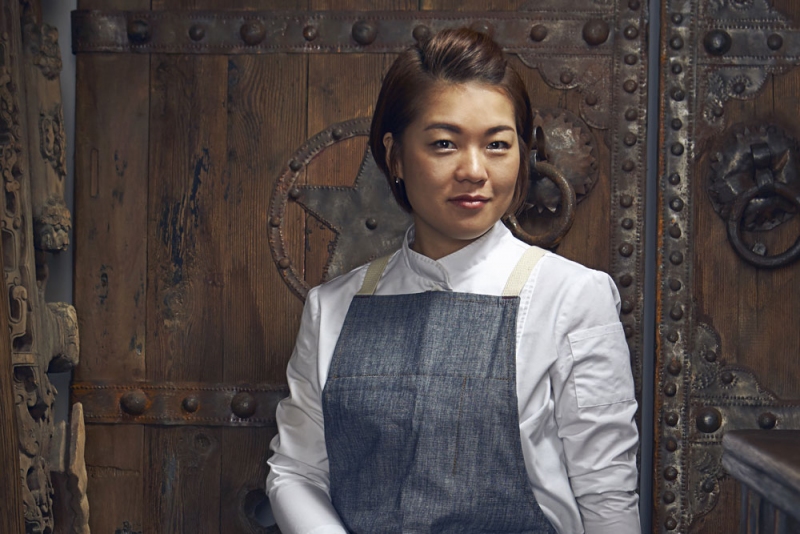 Ten years ago, Jinhee Lee was in Calgary to take the TESL program so that she could teach English to kids back home in Korea. But when that program finished, she didn’t want to leave Calgary. Instead, she registered in a business program at SAIT. But, she found that it wasn’t a good fit for her and she eventually found her way into the school’s professional cooking program.

It turns out, Lee was a natural chef. Today, she’s the executive chef at one of the city’s most talked-about new restaurants, Foreign Concept. And, recently, she took home the gold medal at the Canadian Culinary Championships, something she never thought would happen.

As a chef, Lee often works late into the night. So, after work, when she’s looking for a place that’s still open and that serves Korean food, she picks Anju. While the dishes here aren’t authentic Korean dishes, they are inspired by traditional Korean flavours.

“I think Chef Roy Oh’s food is really creative, but he still respects the Korean flavours,” says Lee. “My favourite dish at Anju is the crispy tofu – it was my favourite dish in Korea! But the way Roy makes it, it’s next level.”

Chef Roy Oh is also one of Lee’s mentors and friends. So it’s a bonus that she can eat Korean dishes while also catching up with Oh. Lee says Anju is also her favourite Korean restaurant for the ambience.

You’ll find Korean Village across the road from Shaw Millennium Park and next to Olive Chicken. This is where Lee will go when she’s craving authentic Korean food that her mom would make when she was growing up.

“Sometimes I don’t feel like modern or Western food, and I just crave mom’s food. So, I go to Korean Village for the kimchi stew. It reminds me of home a little bit,” says Lee.

Lee also likes the banchan, or side dishes, sold here. Lee says the stews come with five or six side dishes, which can include everything from kimchi to stir fried vegetables to tofu.

Another place Lee visits for traditional Korean dishes is Han Korea, just off of Macleod Trail. Come hungry – the rice is self-serve so you can fill your bowl with as much rice as you like. Lee recommends you order the Korean blood sausage too.

For a quick Korean snack, Lee visits Soban Korean BBQ in Chinatown. She recommends the tteokbokki here – that’s a dish with tubular rice cakes, fish cakes and vegetables in a spicy sauce. Her all-time favourite dish here – and her all-time favourite Korean snack – is the green onion chicken. It’s Korean-style, deep-fried chicken with soy sauce and plenty of green onion.

Another one of Lee’s favourite places for Korean-style fried chicken (known as yangnyeom chicken) is Wow Chicken. “Texture-wise, I love the fried chicken here,” says Lee. “It’s crispy and flavourful. And like in Korea, you can choose your flavour.”

For a social meal, Lee chooses Korean barbecue and will visit Seoul Korean BBQ off of Macleod Trail. “Every once in a while, I bring all my cooks to go eat Korean barbecue. We eat the barbecued beef with the lettuce wrap and just talk,” says Lee. “This is not really something I make at home. I live in a condo, so if I want to do a Korean barbecue at home, the fire alarm would go off and my whole house would smell like meat,” laughs Lee.

There are two things that Lee thinks her family members make better than anyone else: kimchi and mackerel claypot.

“My mom makes the best kimchi. I don’t know how she does it – it’s so clean and powerful,” says Lee. “She makes like 10 different kinds of kimchi and has two kimchi fridges!” Lee also makes her own kimchi for Foreign Concept, but it is a white kimchi. Lee says that traditionally, white kimchi was only served to the Korean royal family.

Lee serves a similar mackerel claypot dish in Foreign Concept. The dish is $23 and is served with daikon, shishito pepper and sweet rice cake.