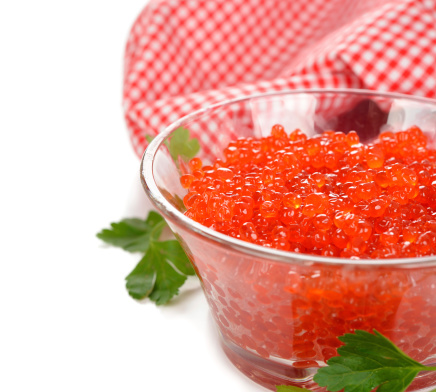 Eat caviar and you’re choosing to eat like a Russian tsar. Traditionally, the term caviar refers to the salt-cured roe (the mass of fish eggs) from wild sturgeon in the Caspian and Black Sea. Nowadays, “caviar” may be used to describe the roe from other large fish, like salmon.

Caviar is not a Russian food eaten on a daily basis. Caviar was, and is, commonly associated with wealth and luxury, so caviar is reserved for holidays, celebrations and festive occasions. Interestingly, Russians were among the first to market caviar as a culinary delicacy. Both sturgeon roe (black caviar) and salmon roe (red caviar) are popular delicacies in Russia.

Where to find caviar:

Purchase 100 grams of salmon caviar ($11) from Matrioshka Russian Delicatessen, a Russian grocery store on 14th Street S.W. You can enjoy this traditionally Russian treat a number of ways. For a simple meal, spread a generous helping of caviar on buttered French bread. For a fancy appetizer at a party or for a special occasion, scoop the yolk out of halved hardboiled eggs and fill with caviar.

Blini are thin, flat Russian pancakes that have been served in Russia for many years; they recently celebrated their 1,000th birthday. In ancient times, blini were made from an oat jelly but now are also made from wheat, rye and barley.

Traditionally, there were several occasions when blini were made and eaten in Russian culture. They were – and still are – made to celebrate the last week before Lent in the spring. They were also served after the birth of a child in order to bring the newborn luck, and at funerals. Fun fact: Russian Romantic author Alexander Pushkin wrote entire pages dedicated to blini.

Where to find blini:

While it’s debated whether this dish is of Russian, Ukrainian or Polish origin, it is commonly agreed that borsch is a soup made with beets, tomatoes and other vegetables. Russian borscht most commonly includes meat, cabbage and potatoes in addition to the other vegetables.

Borscht is a simple soup that isn’t reserved for special occasions. Itt can be served either hot or cold, although cold borscht is more common in Baltic cuisine than Russian cuisine. The cold borscht is usually bright pink in colour.

Where to find borscht:

Perogy Boyz shares their borscht family recipe. This is a hearty soup, packed with beets, carrots and onions.With a tomato base, this borscht is particularly special as seared beef is added on top. Follow Perogy Boyz on Twitter or Facebook to see where they’ll be parking their food truck next. $4.

Heritage Bakery and Deli serves a classic vegetable borscht made entirely from scratch, topped off with fresh dill and a dollop of sour cream. For something slightly different try “zurek,” or white borscht. This variety of the soup is creamier and slightly more sour than the classic borscht, and is filled with garlic sausage, hardboiled eggs and potatoes. From $3.95.