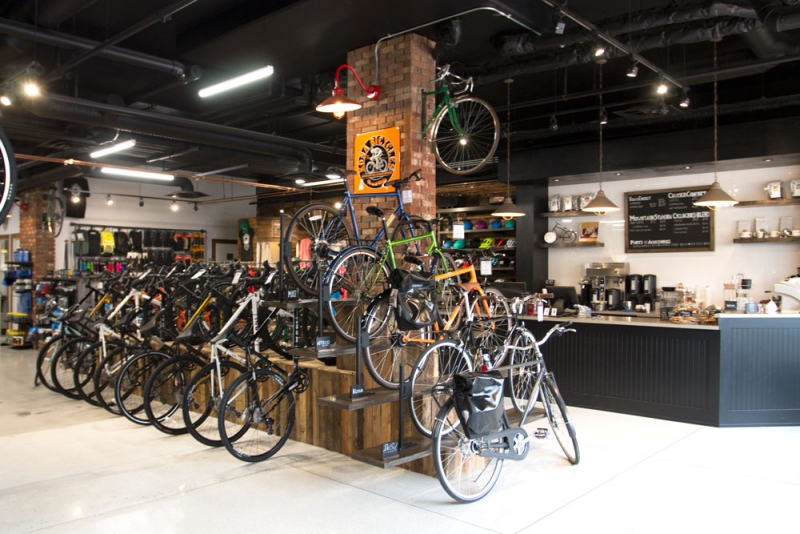 Cyclists and coffee drinkers alike will feel right at home in the newly opened Bike and Brew in Bridgeland.

Already a popular concept in places like Seattle and Portland (there’s even one in Canmore), Bike and Brew is part coffee shop, part bike and repair shop. The 2,600-square-foot shop is the brainchild of owners Travis Ferguson and Weston Covert, who have worked in the cycling industry for years and previously owned The Cyclepath Calgary‘s north location. The pair came up with the idea for a casual, community-minded coffee and bike shop hybrid that was located closer to the inner city around two years ago, and decided to make it happen in the neighbourhood of Bridgeland.

“Bike shopping can be pretty overwhelming, especially if you’re new and you don’t know what to look for. So we wanted to de-tune everything so it was a more comfortable environment. You don’t have to be a cyclist to come enjoy some coffee and look around,” Ferguson says.

It doesn’t hurt that the shop is surrounded by bike-friendly roads and paths. The road in front of Bike and Brew is a bike share road, while the nearby Edmonton Trail has a cycle track. Cyclists can also access Calgary’s RiverWalk from Bridgeland via the George C. King Bridge.

“We’ve got a nice circle where there’s a lot of different access points to reach Bike and Brew by bicycle and to do it safely,” Covert says.

The majority of the shop is focused around cycling, offering bicycles, cycling accessories and lifestyle apparel. The shop carries bicycle brands like Kona, Apollo, Masi, Del Sol, Simcoe and Cinelli, which come in a range of styles from everyday commuter bikes to mountains bikes. Men, women and children can shop the cycling-friendly lifestyle apparel from brands like Levi’s Commuter and Fox, plus a selection of cycling accessories like bike saddles, pedals, handlebars, water bottles, bells and helmets. The shop can also bring in more high-end technical gear upon request.

There’s also a full-service repair shop at the back of Bike and Brew, which offers services ranging from fixing a popped tire to complete bike tune-ups for all bike styles.

At the front of the shop, around 400 square feet of space is dedicated to coffee. Handmade hemlock fir tables and benches that can seat around 15 peoples line the front windows, while a modern black and white coffee bar sits nearby. The combination of a modern coffee bar and more rustic, industrial elements like brick pillars and reclaimed palette wood on the walls helps bring a cozy vibe to the shop. Bike and Brew serves Fratello coffee, tea and baked goods from Corbeaux Bakehouse (sandwiches will eventually be offered as well).

With a friendly, accessible atmosphere that welcomes cyclists, coffee drinks and passers-by, it’s clear that community is at the forefront for Bike and Brew.

“Community is big for us, we always plan on growing and doing more in the community. So as we get past our first season and into our second and third season, our customers can only expect to see us do more and more for the community as we gain our traction and our clientele base,” Covert says. “We want to eventually get into doing a lot of stuff outside of the shop walls as well.”