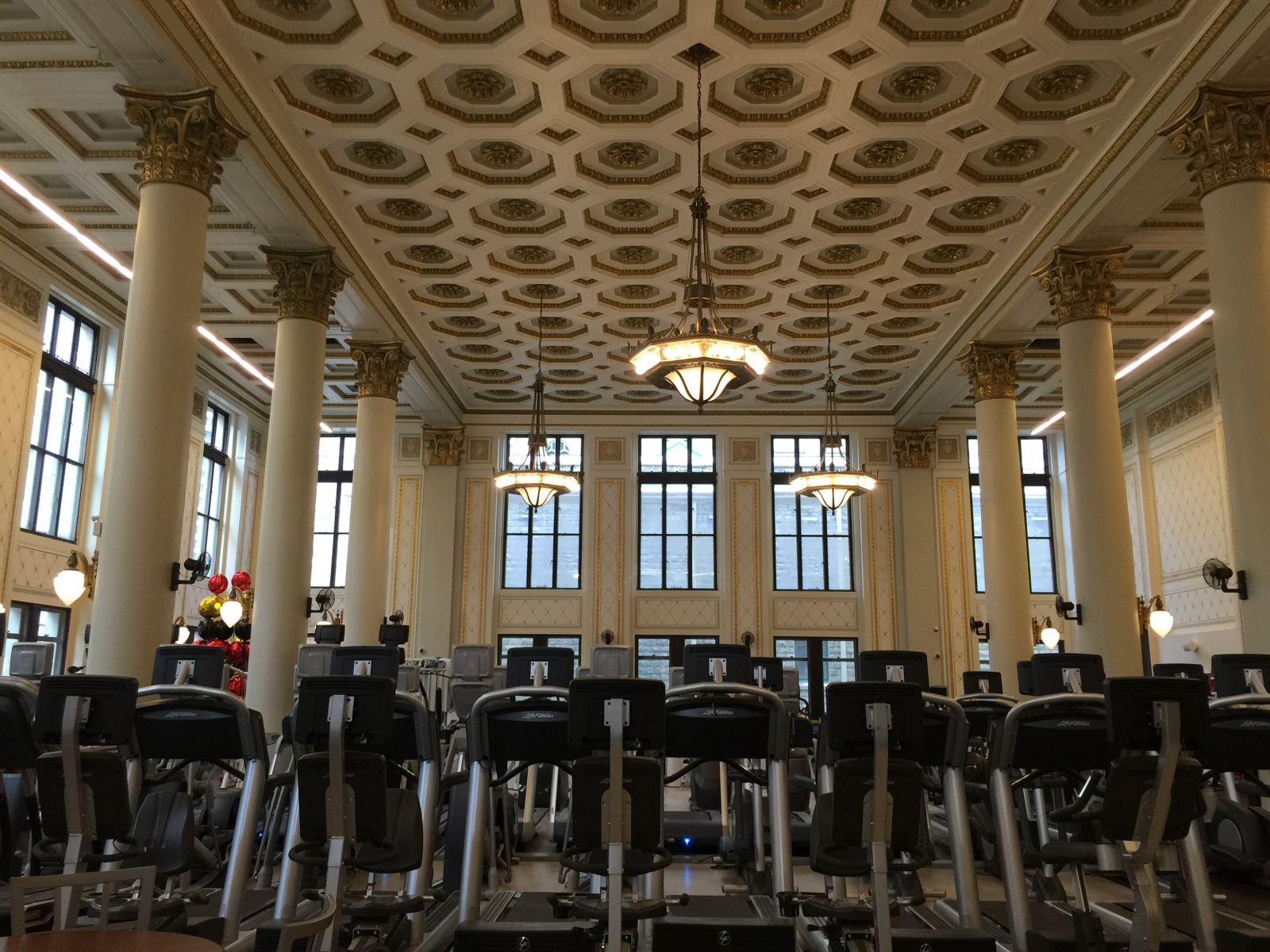 Inside the New GoodLife Fitness

See why some people are calling the new Goodlife Fitness on Stephen Avenue one of the most beautiful gyms in the world.

If entering a fitness club seems like a dreary proposition, then perhaps the new GoodLife Fitness on Stephen Avenue will inspire you to get back on the treadmill, if only to admire your lush surroundings. The former Bank of Montreal – and most recently an A&B Sound which closed in 2006 – has been restored to its former glory.

The process took a year to complete, and since the building is a designated heritage site, several guidelines were in place to bring the structure back to its former glory. GoodLife Fitness employed Square Feet Design Group Inc. and Trigon Construction Management to oversee the transformation, which included extensive work on the building’s basement, main floor and mezzanine. The heritage building restoration guidelines proved to be one of the biggest challenges in the restoration. Nothing could be fastened to the floor, to the walls or to the ceiling. “If we attach anything to the building it has to be on a flat surface that we can repair if we take it down,” says Lori Ireland of Square Feet Design.

The impressive Beaux Arts-style building was originally a Bank of Montreal designed by Kenneth Guscotte Rea, a Montreal-based architect who built more than 120 banks across Canada. Completed in 1931, the building served as the bank’s regional headquarters for 50 years. The impressive building’s facade is clad in Manitoba Tyndall limestone and features four fluted Corinthian columns.

Of course the gym, which opened its doors to the public on December 18, 2014, offers all the modern amenities you’d expect from a new fitness club, including high-end equipment, fitness classes, personal training and luxurious change rooms, but perhaps what’s most impressive is the grandeur of the space.

Ireland toured us around the facility to point out several of the unique details of this historic building.

The gym’s ceiling’s are 35-feet high, and the main-floor space is dotted with columns topped with Corinthian capitals decorated with gold-leaf appliqu. In all, 917 ounces of gold leaf was used to restore the ceiling. The chandeliers are all original, but retrofitted with modern LED lights to improve the room’s brightness. According to Ireland, the space is now three-times brighter than before.

“This has come a long way. My first visit was in February of 2012 and these columns were dark green,” says Ireland. “The landlord had already spoused up the ceiling. The original gold gilt was all intact. The medallions were pink at one point.

“When we arrived, this room was basically a construction storage area for all of the trades that were working on the two office floors above.”

Previous tenants had removed the original staircase to the mezzanine, so an ultra-modern granite-and-glass staircase was installed. It’s a favourite feature of Ireland’s, who took great pains to design it to look modern without detracting from the building’s heritage appeal. “I think the staircase is a piece of art,” she says. “It’s completely modern, but the glass doesn’t take away from the interior. We even installed brass handrails, which we don’t typically do.

“We couldn’t match the craftsmanship of the original architecture, so we went completely opposite to what was here to contrast.”

The inside walls, shown here on the mezzanine level, are adorned with Neo Classic panels that were hand-painted with gold gilt.

One of the other significant challenges with the restoration was bringing the building up to code for heating and cooling. Fitness clubs have a specific set of criteria they abide by, but faced with the added challenge of strict heritage-site restoration guidelines, GoodLife had to employ several innovations when working with the building’s old hot water heating system.

Most of the existing solid marble handrails were in good shape. The GoodLife team created custom-painted spindles and handrails to replace any sections that were missing. Glass paneling was added for safety.

Several elements of the building’s grandeur were discovered after removing several pieces of plywood which had been installed by previous tenants for protection when the building wasn’t occupied. Sections of the inlaid marble flooring that leads to the basement were covered by commercial carpeting.

The original brass handrails that lead to the basement were discovered in storage. Ireland was quick to salvage the pieces and have them restored and reinstalled in their original spot.

The original vault doors have been pinned in an open position. The vault pictured here now houses the permanent lockers. The other vault was converted to the men’s change room.

The spinning room is located in what used to be an atrium. The existing exposed stone exterior is enhanced by accent lighting.

The original entrance vestibule is made of solid brass slabs which were polished to removed any tarnish which had accumulated. The large original feature clock hadn’t worked since the 1930s, and heritage building restoration rules forbade having the clock removed to be sent for restoration, so a local company retrofit it onsite. It’s now functioning like it did in the height of the building’s heyday.