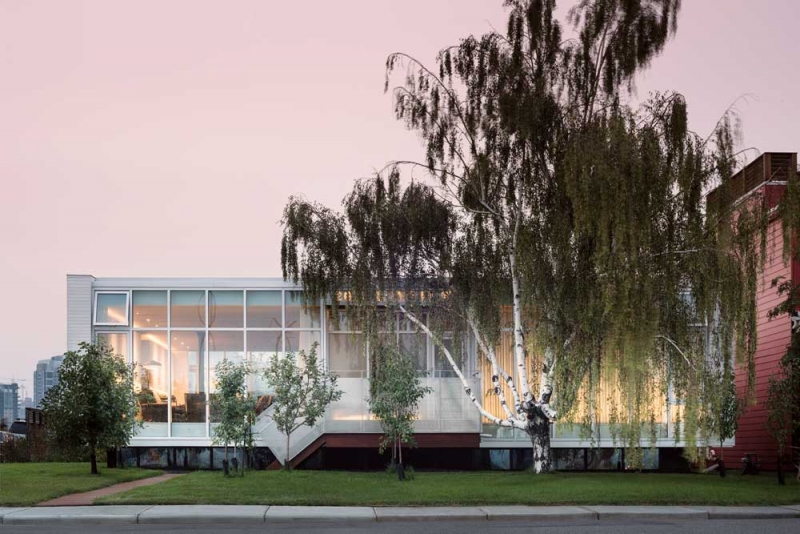 The home features floor-to-ceiling, high-efficiency windows and a select knotty cedar exterior. The basement is inset, creating a plinth that makes it seem as if the main floor is floating. Photograph by Jared Sych.

The home that Marc Boutin and Allison Morgan built for their family combines all the things they cherish: travelling and living in Europe, their love of art, having friends over and the busyness of raising three boys.

As you might expect, Boutin and Morgan had strong views on what their home should look and feel like. He’s the principal architect of Marc Boutin Architectural Collaborative and has won national and international awards for residential and public-space designs, including Calgary’s Poppy Plaza on Memorial Drive. She’s a contemporary large-scale figurative painter, whose work sometimes tackles complex themes.

The one-storey rectangular home in Ramsay has floor-to-ceiling windows spanning the length of the east and west sides. The lower level is inset, making the upper level appear to be floating, while the select knotty cedar-clad exterior is softened by the lazy branches of a weeping birch and a row of young fruit trees lining a wooden walkway. “We basically want an orchard around the house; we always want to feel like we’re in the trees,” says Morgan, who loves to garden and has been known to throw the occasional pie-baking or crab-apple jelly making party.

The simplicity of the rooms is intended to be “responsive” and adaptable to how the family’s life unfolds, says Boutin. All the rooms are meant to be multi-purpose.

While the home was being built, Boutin would coyly tease the neighbours, asking: “Do you think it’s going to be a school for gifted children, or a post office?” But joking aside, the home was always meant to be less about showy outer appearances and more how the couple and their three sons, ages 21, 19 and 16, go about their daily lives amongst the things they feel connected to.

Homeowner Allison Morgan wanted a kitchen that was adaptable for whatever the day might hold, whether that’s the boys doing their homework or having friends over to bake pies. The ironwood island separates into several pieces and most of the appliances are tucked away or concealed.

The first thing you notice walking into the home – aside from Sean the family dog sprawled in the sunlight of the front windows – is the eclectic mix of art, which is fitting for the home of an artist and an architect.

A large painting by Morgan, titled Skeptic, hangs on the white walls of the stairwell, above the jet-black painted stairs to her lower-level studio. Mounted on the wall beside it is a large muskox head, which Boutin quips he had little choice on acquiring (“my marriage depended on it,” he says). The muskox fits with Morgan’s collection of a dozen or so antlers that sit along a windowsill in the lower-level family room opposite her studio.

The apartment in Rome that the family lived in for a year after Boutin won the Canada Council for the Arts‘ prestigious Prix de Rome in Architecture award provided some of the guiding principles for the design of this home (use of the apartment was part of the award). “That’s where the inspiration came from for this house,” says Boutin.

The ideas incorporated into their home from that apartment include natural light from the floor-to-ceiling windows and neutral, consistent, flowing surfaces, such as natural Marmoleum floors and clear cedar ceilings throughout the house, as well as the clutter-free, multi-purpose rooms. With the exception of the stove, most of the kitchen appliances are tucked away or hidden, and the kitchen island is a 14-foot ironwood table that can be separated, allowing it to adapt for use in entertaining or as a homework area.

The narrow white cabinets that run the length of the open living area also provide hidden storage space (the same cabinets can be found in the bedrooms). The white millwork is designed to serve as a display for paintings hanging along a rail, while between the upper and lower cabinets a narrow opening with a mirrored backdrop provides a stage for three-dimensional artworks.

The home’s main hallway, flooded with light from three circular skylights, features a muskox head above the stairway leading to the lower level. At the end of the hallway is a large-scale artwork that Morgan created from a childhood sketch by one of her sons.

Boutin says much of their furniture and art is a curated collection of items that are “found or stolen,” and all have some connection to their lives. The lived-in leather couch in the living room belonged to Morgan’s parents, two Allan Gould string chairs are from the architectural firm where Boutin’s mother once worked in Montreal and an aunt’s contemporary chrome 1960s teacart houses the stereo. Two metal office-style chairs were acquired from institutions where Boutin has studied and worked. Boutin also designed the Carrara marble and metal dining room table, which has become his favourite spot in the house to work.

Adding to the casual atmosphere of the home, a woodstove separates the dining and living areas. It provides warmth and can be used for cooking. A stack of wood is an arm’s reach away under a window, creating a cozy cabin feel. Boutin deems the stove a play on the concept of the hearth being the heart of the home – a classic Canadian symbol of warmth and contentment.

The living room features an eclectic mix of furniture pieces, some passed down from family members. A slot running through the white millwork creates a showcase for Inuit sculptures and cherished objects from the family’s travels.

A wood-burning stove stands between the living room and dining room with a stack of wood nearby, creating what Boutin describes as a cozy “coming home” feeling.

The entryway, as seen from the living room, features a woodcut by Calgary artist Lisa Brawn and a pocket door with a childhood sketch by one of the couple’s sons on it, which Morgan recreated using an overhead projector.

1. Make sure it can be adapted to the various stages of life. “Today it’s a bedroom, tomorrow it’s an office,” Boutin says, specifically referring to a space at the front of his own house currently being used as a bedroom by one of his sons.

2. An entryway on the lower level of Boutin’s home provides the couple’s sons, ages 21, 19 and 16, a sense of autonomy, allowing them to come and go without having to use the main entrance. If the couple decides to rent out the basement in the future, the lower-level entryway provides a separate entrance for that, as well.

3. Every room and space is designed to multi-task. “We hate waste,” says Boutin. A prime example of this are the sliding pocket doors at the back of the house, which allow the master-bedroom ensuite to morph into a powder room for guests.

4. Boutin and Allison Morgan, both 53, built the house with their own aging in mind. Should their mobility decline they won’t be forced to find a new home. “Everything we need is on one level,” Boutin says.

Allison Morgan’s art studio on the lower level is something she didn’t have in the family’s previous home, a 1950s-era bungalow.

Exterior view of the back of the home, which features a separate entrance on the lower level.