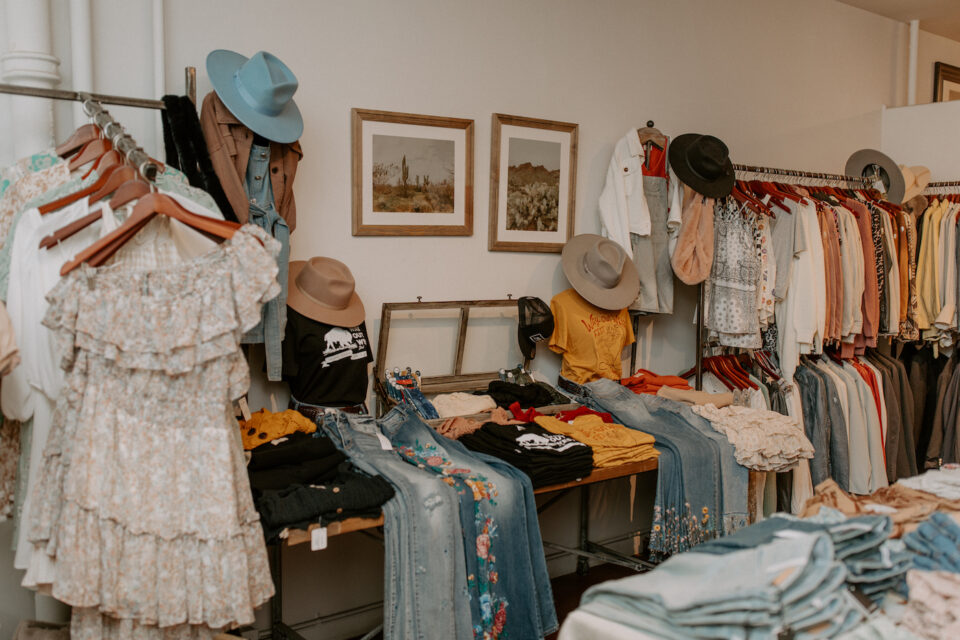 As home of the world-famous Calgary Stampede, it should come as no surprise that our city is well-stocked when it comes to western wear. You can often find western pieces at vintage boutiques and thrift stores, and many local shops in Calgary bring in western items during Stampede season. But there are also lots of stores in and around the city that sell western clothes and accessories all year round.

Here are a few western stores to check out for all of your Stampede needs.

Founded in Calgary, Alberta Boot Company is known for its iconic cowboy boots. Using all-natural leathers, the company’s boot makers handcraft cowboy and roper-style boots that come in a variety of toe shapes. And, as the official boot company of the Calgary Stampede, Alberta Boot Company also creates and sells a CS collection of commemorative boots.

Note: The store will soon be moving to a new location in the Beltline.

Located in Inglewood, Cody & Sioux was opened in 2016 by the two women who run Western Horse Review magazine. The store stocks items that incorporate traditional western design elements (such as turquoise, silver and leather), but with a modern twist. The owners also make an effort to promote and support North American artists. Whether you’re shopping in-store or online, you’ll find a variety of fashionable clothing, accessories, home decor and footwear to choose from. Plus, from now until Stampede, Cody & Sioux is also selling a selection of consigned western wear downstairs in the store.

Proclaimed to be Canada’s largest Western store, Irvine’s Tack and Western Wear is a one-stop shop, with more than 110,000 square feet of shopping space. The store sells a variety of well-known western wear brands, such as Wrangler, Cinch, Ariat and more. It also has more than 1,200 saddles in stock, plus a seemingly endless supply of ropes, tack, hats, footwear and jewellery. Although Irvine’s is located just outside the city in Crossfield, it’s definitely worth checking out.

Launched in 1983, Lammle’s is a true Calgary staple. In fact, the business’s first three original stores were all located in Calgary, although there are now Lammle’s stores throughout most of Western Canada. Lammle’s carries a wide selection of cowboy boots, as well as top name brands in western clothing. The store has a range of cowboy hats (in straw or felt), as well as belts, dresses, skirts, jeans, jackets, vests, a kid’s collection and more. Lammle’s is also the official western wear supplier for the Calgary Stampede (CS), selling CS branded merchandise such as keychains, belt buckles, hoodies and throw blankets. Check out one of Lammle’s multiple locations throughout the city, or head to the Lammle’s store on the Stampede grounds once the festivities begin.

This family-owned western consignment shop sells used, high-quality tack and clothing, but it also supports local vendors by showcasing and selling their handcrafted products in-store. Especially passionate about saddles, the owners of Rein It In have a saddle fitting guide on the store’s website, for those who are looking for just the right fit.

Launched in the 1920s, Smithbilt began operations by producing mostly western dress hats, but the company soon began collaborating with the Stampede Board to make western hats for spectators and competitors attending the Calgary Stampede. In 1946, Smithbilt’s founders created the first white cowboy hat, which has since become a renowned Stampede symbol. Today, white cowboy hats are often worn by local officials during the Stampede, and they are also frequently gifted to visiting politicians, athletes and other VIPs. Along with white cowboy hats, Smithbilt sells custom-built western hats and various other styles.

Stampede Boot and Clothing Co. recently moved into a new, 15,000-square-foot location on Macleod Trail. While the store offers a variety of work wear and motorcycle gear, it also carries western apparel, with a wide selection of hats, belts, buckles and cowboy boots. Shoe repair and leather alterations are also offered on-site.