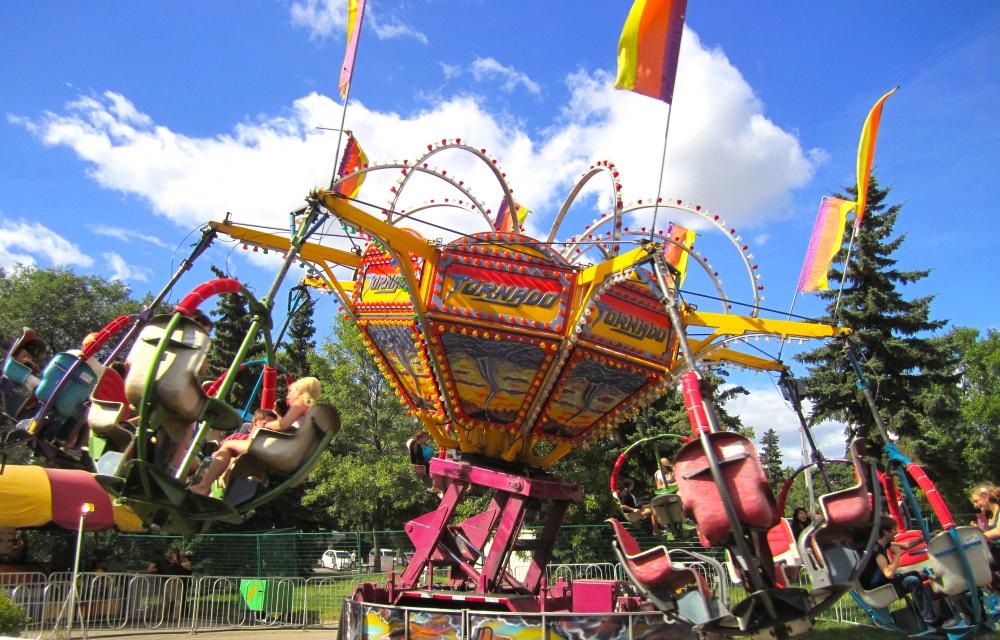 Beakerhead is billing itself as a spectacle and it might not be far off. It includes dozens of events that blend science, art and engineering at more than 21 venues, mostly in downtown Calgary. It also calls itself an “interactive movement.” What does that mean? We’re not sure yet, but we do know we want to find out.

Here are 25 reasons why we are intrigued by Beakerhead.

Beakerhead’s information booth or “launch site” is a 40-foot tall Raygun Gothic Rocketship. You can find it – and climb into it – at Victoria Park Market Walk (1325 1 St. S.W.)

The first event is a breakfast, because this is Calgary and that’s what we do. Eat breakfast starting at 7 a.m. on September 11 at Suncor Energy Plaza (111 5 Ave. S.W.)

Stampede Park gets another midway and this time all of the rides and amusements at Sustainival are powered by vegetable oil, wind, solar and other forms of renewable energy.

Several restaurants have created signature cocktails by combining science and spirits to make drinking even more fun. Raw Bar’s Kaffir-Coconut Cocktail, for example, is a drink inside of an ice sphere.

He managed to command the International Space Station while creating music videos. He was also a pretty good Stampede Parade marshal. For the Tremendous and Curious World of Beakerhead, he shares the stage with a robot band, an opera singer, Jay Ingram and a few other science geeks.

This will be happening, along with a steampunk mob, driveable furniture and art cars, on Thursday and Friday between 4 and 6 p.m. along Stephen Avenue.

There are hands-on workshops, including one that lets you play with iPads and tablets and discover how they became the canvas for the new iGeneration. You’ll figure out if you are part of that generation or already obsolete.

Or to the smarty pants among us, two times pi. For Beakerhead, 6.28 is the amount of minutes people like Nathan Armstrong get to talk about 3D printing of bones or Com. John Herrington gets to talk about floating in space. Speakerhead talks happen Wednesday, Thursday and Friday at noon on Stephen Avenue.

It’s part of Beakernight, which is essentially a giant science-themed street party at Olympic Plaza, East Village RiverWalk and Victoria Park. Dress up as whatever you geek out to the most including robots, celebrities or your favourite food.

There will be a nine-foot tall fortune telling laser cat at Beakernight, which is September 14 from 8 p.m. until midnight.

Be sure to check out the giant catapults built by teams that will launch love-to-hate items like Barbie dolls and junk left behind by exes. Stuff will be thrown Sunday starting at 1 p.m. at Fort Calgary. Prizes will be given out at 3:30 p.m.

Swallow-A-Bicycle theatre’s play i-ROBOT is a live sci-fi performance with puppets and robots that asks big questions about identity, autonomy and humanity. Did we mention robots?

For more information on Beakerhead, including a few more reasons why you should check it out, visit beakerhead.org