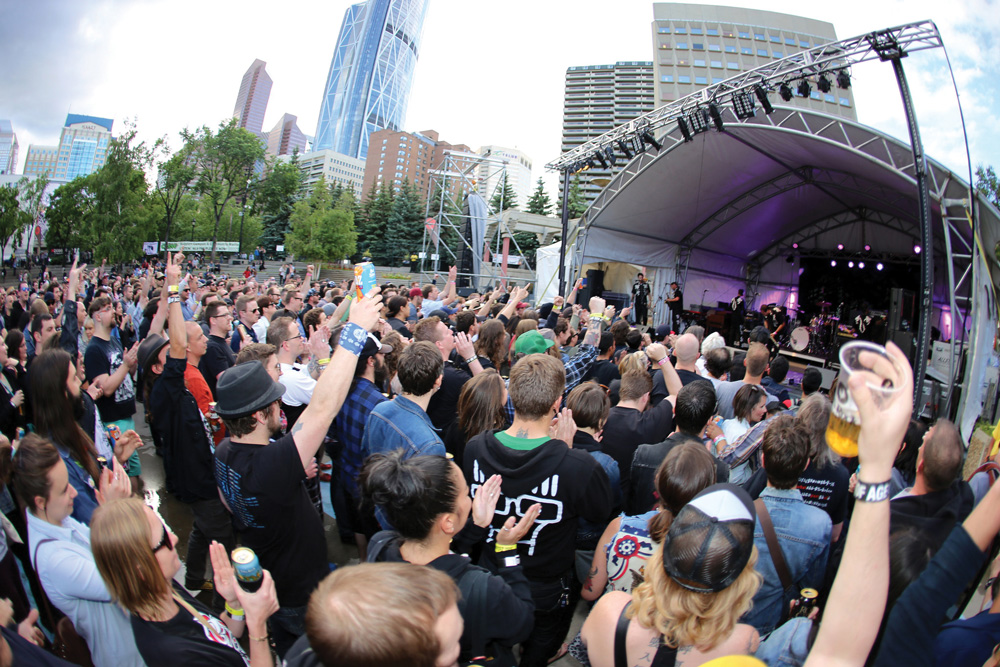 More than 30 venues across Calgary will play host to the Sled Island Music and Arts Festival. Hundreds of acts mean you can’t do it all, but that doesn’t mean you shouldn’t try. Though the festival is mostly known for its headlining musical acts, there are a number of other events, ranging from comedy and film to visual art and presentations, in case you need to step away from the crowds of concert-goers. Last year saw the easing of drinking regulations during the festival as well, which means you’re not confined to a beer garden away from the action anymore, but neither is the guy holding a solo cup high above your head as he head bangs to the music.

With so many shows happening within walking distance of each other, it can be difficult to plan an efficient show itinerary and remember it all before heading out. Pick up a copy of the Sled Island program and keep it handy, lest you lose your way (or your sobriety) and can’t figure out what to do next.

Of the many venues featuring Sled Island performances, only Tubby Dog offers a peanut butter and jelly hot dog topped with Cap’n Crunch, a definite recommendation for those who like things salty and sweet. 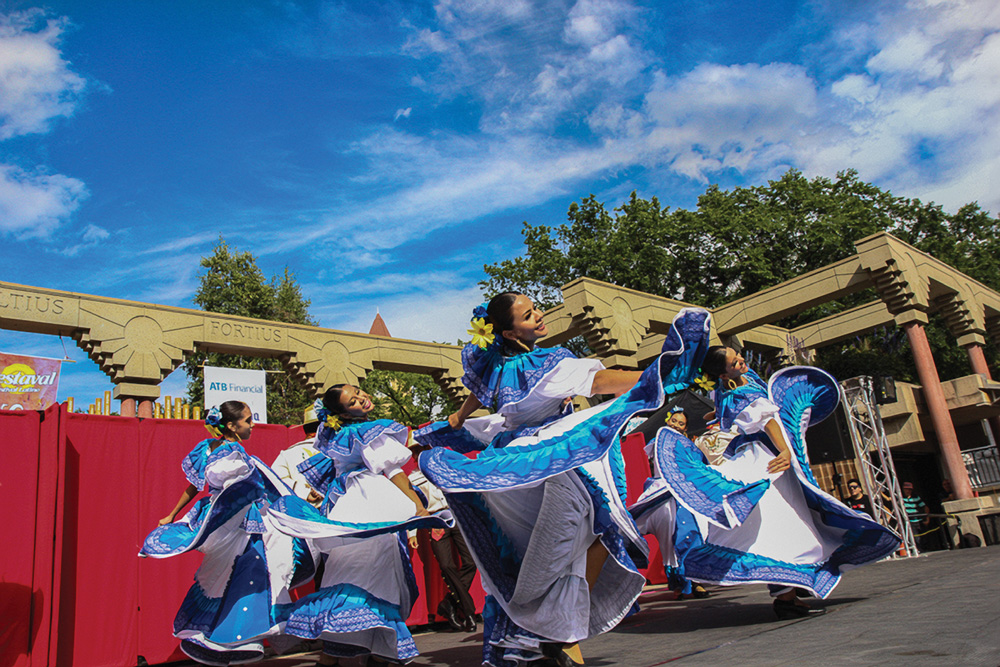 Experience a multicultural celebration of all things Latin American at Fiestaval. This free, family-friendly celebration takes place at Olympic Plaza and features traditional song and dance acts, as well as opportunities to sample Latin cuisine and browse street vendors selling authentic clothes, jewellery and baubles of all kinds. It’s also a chance to learn more about Calgary’s Latin community and try your hand at dancing tango, salsa, rumba and all the other passionate dances you’re too shy to engage in otherwise.

Fiestaval’s venue is right along the downtown CTrain route, so leave the car at home and use transit to get there, preferably early so you can snag one of the prime shady spots under the trees.

You’ll be milling around a lot of gyrating bodies and bustling festival-goers, so, if you’re looking to move around the plaza, be sure to pick up some hand-held fare like the pork-and-pineapple tacos al pastor from El Mariachi Catering. Finish it all off with some secret-recipe sangria in the beer gardens. 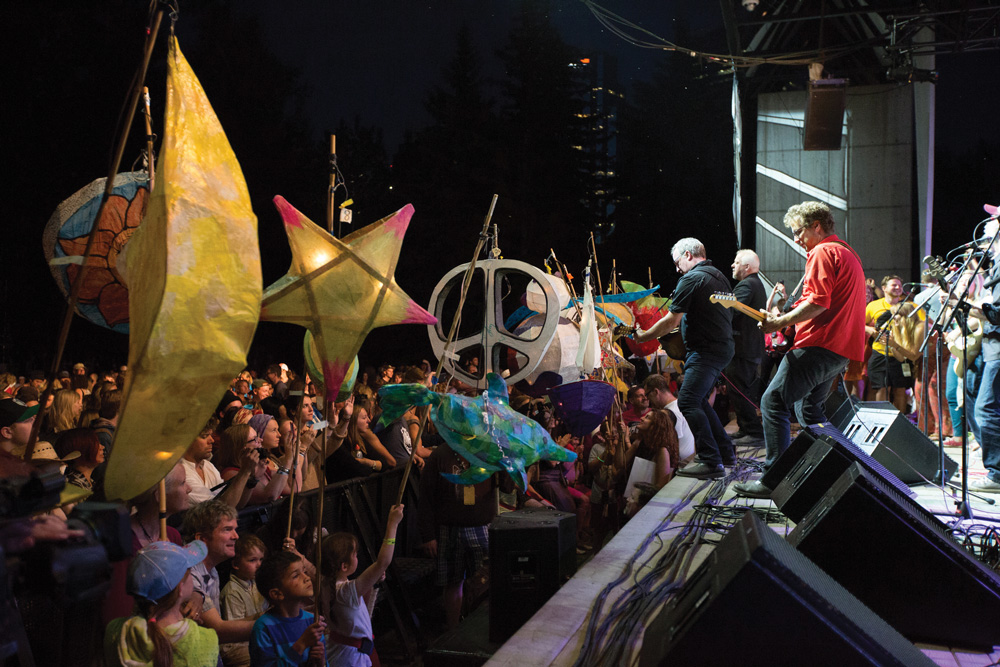 For Folk Fest, Prince’s Island Park is inundated by music junkies looking to hear a mix of up-and-coming as well as established acts. Check out music workshops or kick off the post-Stampede festival season in flip-flops. Dance sections to the side of the stages and marked territory in the form of tarped ground mean you can catch any of the dozens of artists performing across six stages in whatever position suits you. Multiple acts perform at the same time until the main stage act starts up in the evenings, so you’ll want to plan ahead. Past performers include Alison Krauss, A Tribe Called Red, Bruce Cockburn and St. Vincent.

The beer garden line moves at a decent pace, but it can still be a pain to have to wait for 20 people to figure out their drink order. The bigger shows tend to draw people from the gardens to the main stage, so swim against the festival-goer current for shorter wait times when the main stage shows start.

You can bring your own food (but not your own booze) to Folk Fest. However, if you’d rather not lug around your grub all day, check out the many options in the food alley. 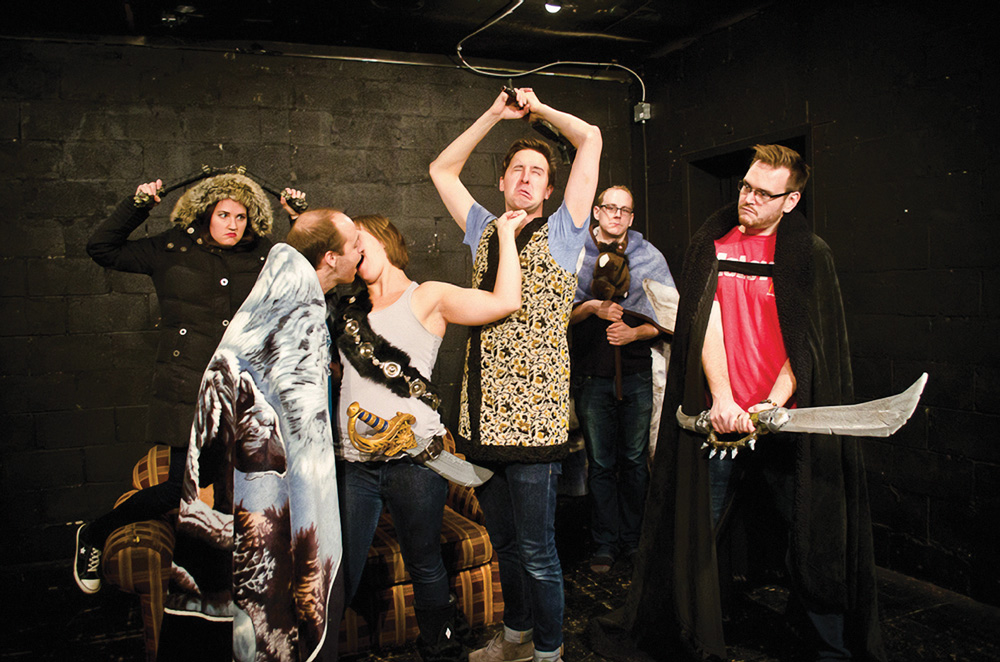 For the duration of Fringe Fest, Inglewood is transformed from a hip, walkable neighbourhood to one filled with buskers and curious Calgarians darting between multiple venues for an odd assortment of film, dance, theatre, improv, puppetry and almost every type of show imaginable. Fringe Fest adheres to guidelines set forth by the Canadian Association of Fringe Festivals, which means shows are completely uncensored and 100 per cent of the profits go to the artists.

To help recoup costs, Fringe Fest sells $5 buttons, which are required to get into shows in addition to a ticket. This button is also a gateway to some pretty nice discounts in certain Inglewood shops and restaurants, so be sure to take advantage of it and do some shopping between shows.

What to Buy and Eat

With so many local eateries worth visiting, including Without Papers, The Ironwood, The Nash and Gravity Espresso & Wine Bar, the hard decision isn’t what to eat, but when to stop eating. Inglewood’s quirky retail shops like The Uncommons, ReWorks and Riva’s Eco Store, also pose a threat to your wallet and attention. 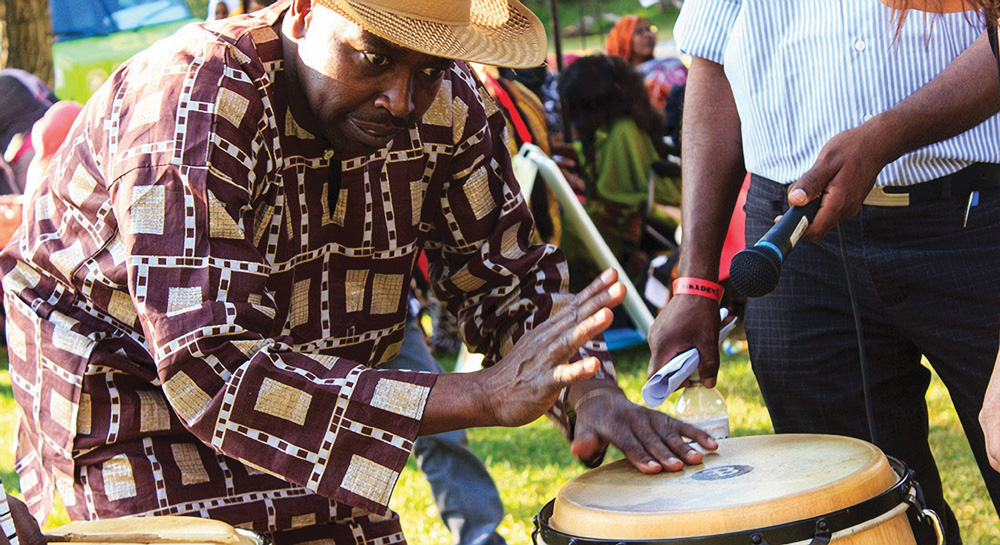 African culture is on full display in Calgary for Afrikadey! The event brings together diverse cultures that make up the continent to various venues, including a final happening at Prince’s Island Park. In addition to the art, music and dance of the festival, check out the booths for hands-on crafts, as well as cuisine from a number of the 54 countries that make up the planet’s second-largest continent.

Like Folk Fest, the outdoor stage at Prince’s Island Park is the kind of venue you’ll want to sit down and enjoy. The grassy terrain and timing mean tarps aren’t as necessary here as they are at the muddy folk music festival, so opt instead for a blanket or lawn chair to save you from lumpy ground and grass stains.

With a wealth of cultural cuisines to choose from, it’s important to pace yourself. Start with some Nigerian dodo and ewa, add some pilau from Tanzania and follow it up with Moroccan couscous and Ethiopian injera for a continental culinary tour. 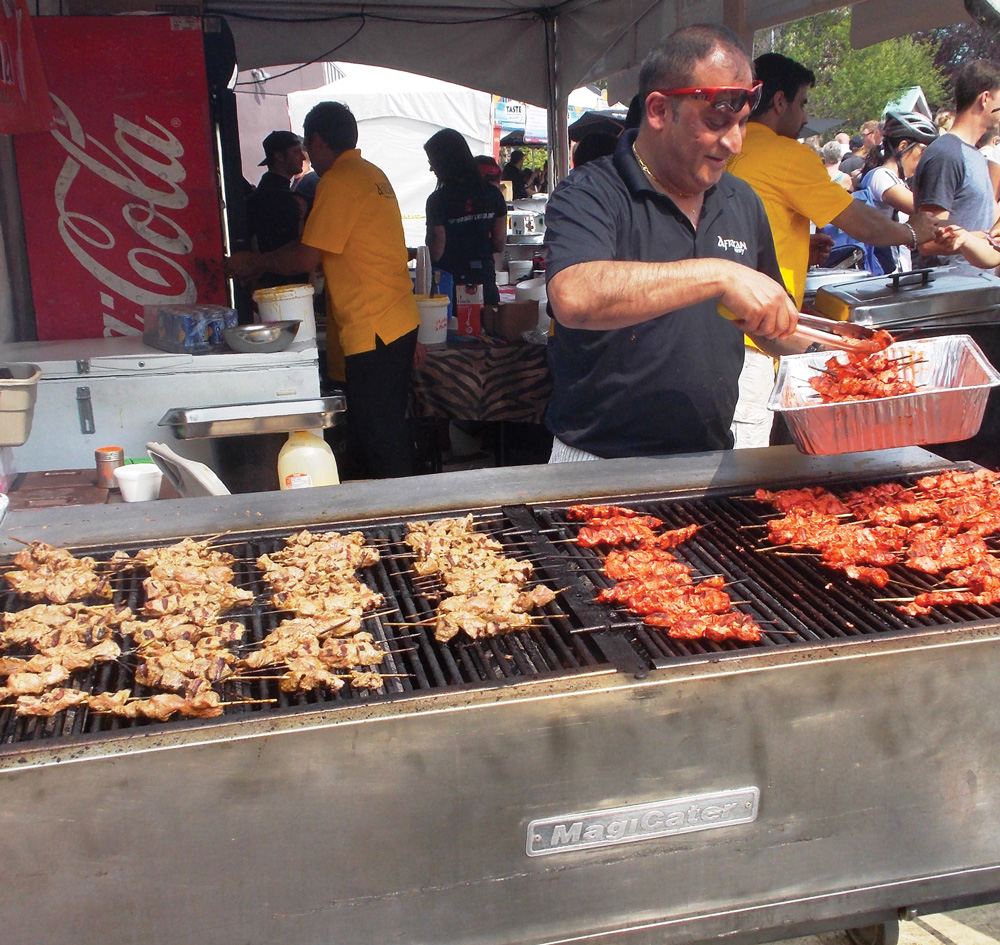 This outdoor food festival brings dozens of restaurants and food booths to the Eau Claire Festival Plaza for a foodie event unlike any other. Buy tickets for $1 each and use them to get sample-sized eats at the various booths spread across the plaza. Greek, Italian, Indian or Thai, whatever your tastes, there’s sure to be enough variety of food here to satisfy the pickiest of palates.

There are usually multiple spots to purchase tickets. If the waiting time for the nearest ticket booth seems torturously long, circle around and find another booth with a shorter line. Once you’ve got your tickets, keep in mind not all samples are priced equally, with many costing several tickets, so expect to spend at least $30 per person for a decent nosh.

Something you’ve never tried before! The point of this festival’s small portions is to dip your toe into new food territory, so go ahead, try that unpronounceable dish you’re unfamiliar with. 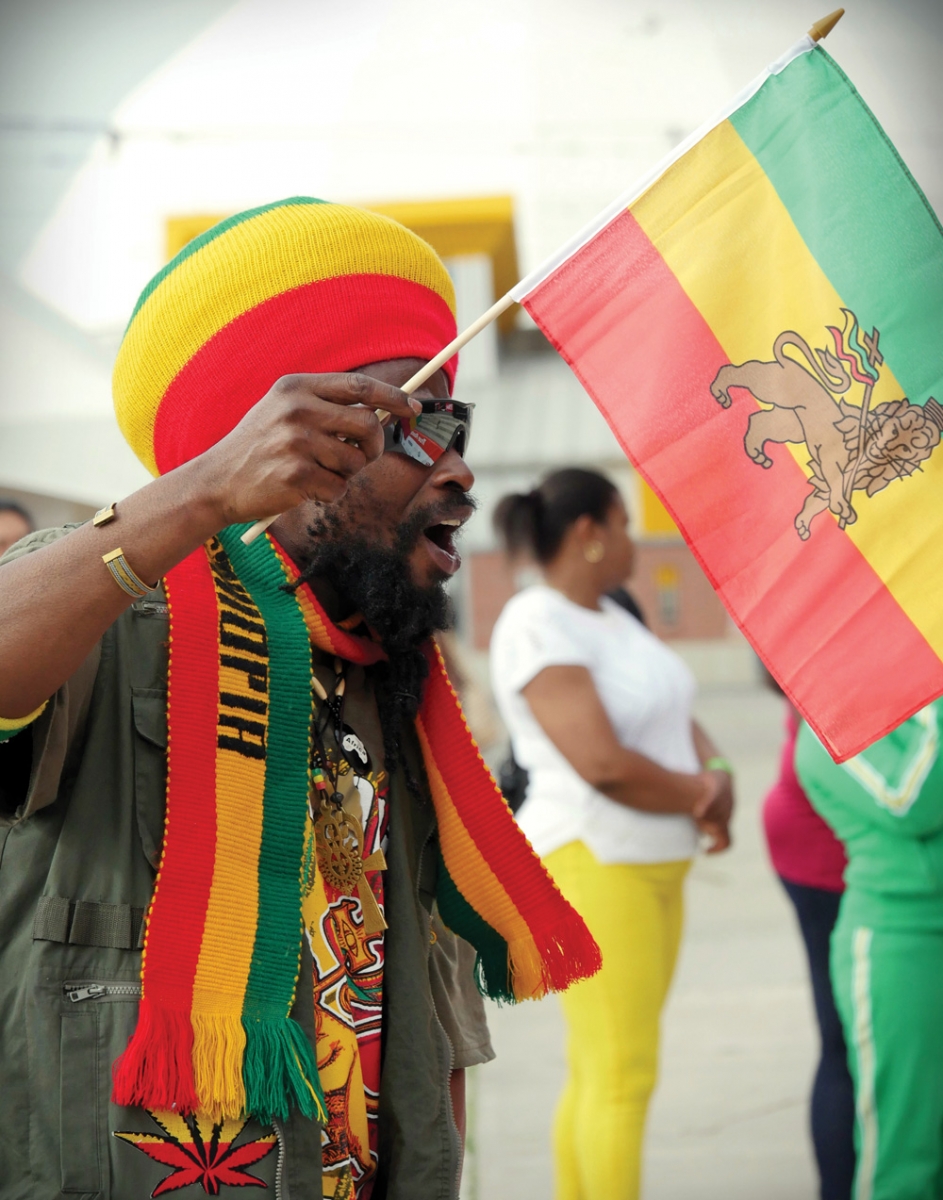 The annual Reggae Fest is a celebration of all things related to reggae music in Canada. This family-friendly event welcomes Rastagarians – Calgarians with an affinity for Caribbean culture – of all stripes to see local bands share the stage with established international performers. The festival also caters to kids with a designated youth area, and to adults with a designated adult area (a.k.a. the beer garden).

This is a family-friendly event, and smart parents know that taking advantage of the Kidz Zone, with numerous activities held throughout the day, is the best bet if you want to bring your kids to the festival and still enjoy the music.

What to Buy and Eat

Some festival T-shirts are destined to be worn only when you’re repainting your bedroom; not so of the Reggae Fest’s minimalist “I’m a Rastagarian” tees, which you can rock in a number of fetching colours for only $10. For food, the jerk is the quintessential go-to favourite. 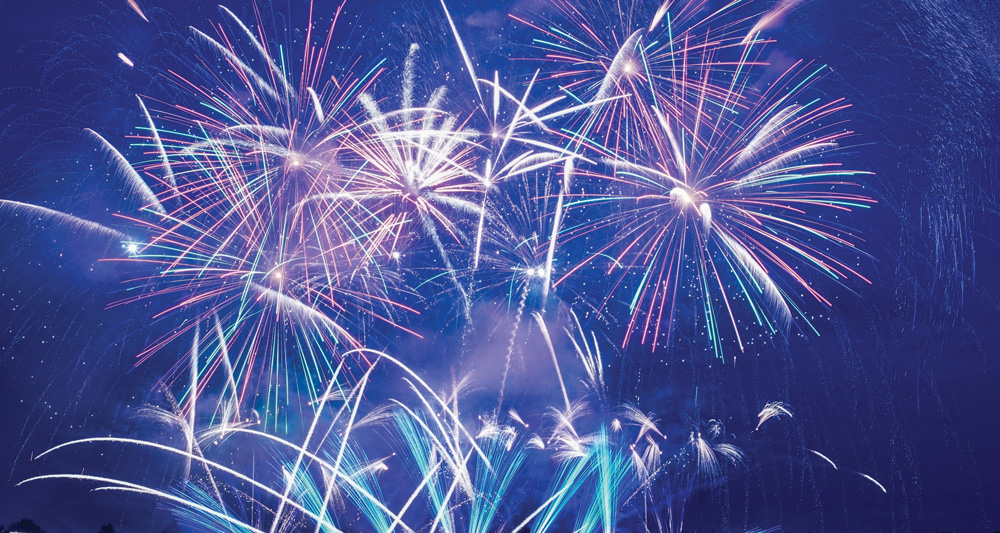 This arts and culture festival celebrates Calgary’s cultural diversity, offering patrons the chance to learn more about the various cultures that have come to Calgary over the years. GlobalFest at Elliston Park brings together the OneWorld Festival, which features cultural pavilions, ethnic food kiosks and vendor displays, with the Calgary Fireworks Festival Society, which is well known for its nightly firework displays choreographed to music. The festival also features a human rights forum from Aug. 17 to 21 at the John Dutton Theatre (Calgary Public Library main branch), with talks on topics such as temporary foreign workers, cultural healing, residential schools and freedom of speech.

The $6 round-trip shuttle (kids five and under ride free) from Marlborough Mall is your friend. Parking around Elliston Park is tricky during the festival, and you’ll be thankful for a quick ride out of the area once everyone starts to empty out of the park.

In the spirit of multiculturalism, GlobalFest is the place to try out new cuisine at one of a dozen food stalls offering Indonesian, Ukrainian, Thai and Indian cuisine, among others, or opt for classics like mini-donuts or corn dogs, since festivals are one of the few places to scarf them down and GlobalFest is one of the last festivals of the summer season.