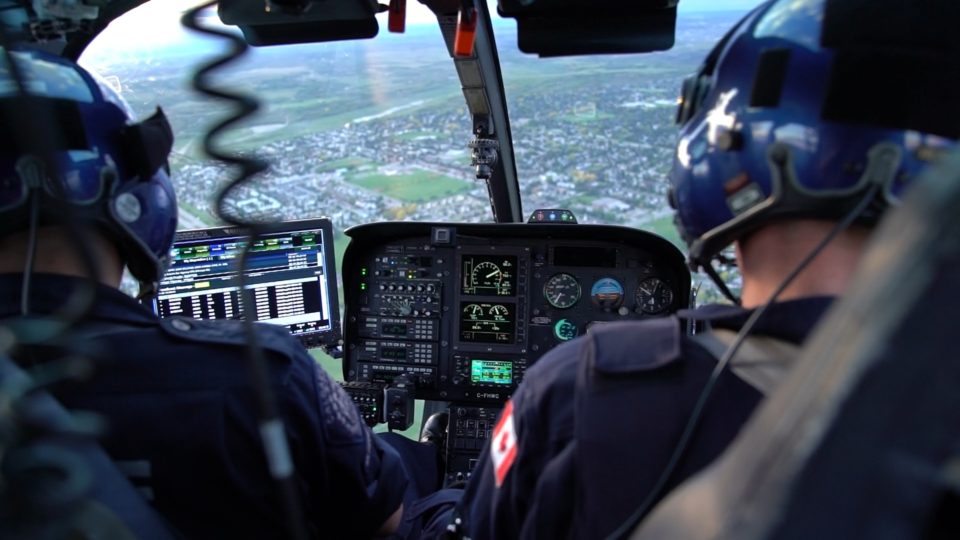 View from HAWCS, which is featured in the first episode of Keeping Canada Safe. Force Four Entertainment.

Patrolling the skies above Calgary, the city’s police helicopter team, HAWCS, monitors the pursuit of an assault suspect through the streets. Within the same 48-hour period, in a different part of the city, a firearms expert conducts tests on a sawed-off shotgun to determine if it’s the murder weapon in an open homicide case.

These are a couple stories chronicled in the CBC’s upcoming eight-part documentary miniseries, Keeping Canada Safe. Premiering on March 16 and airing throughout four weeks, the series shines a light on the work done across the country to protect Canadians. While this idea has been in development for more than a year, the series premiere is proving very timely. In a year where discussions of national security on a broad scale are common, this new series takes a closer look at the organizations and individuals that work to preserve safety.

“There’s never been a better time for a series like this, because I think that it helps us to, I hope, get a little personal,”says Keeping Canada Safe creative producer Dianna Bodnar.

“What we do is we profile individual human beings, individual people in very, sometimes, trying circumstances. And I think that it’s really important nowadays for us to be able to walk in other people’s shoes, to imagine other people’s realities, to put ourselves in their place.”

The series concept comes from the creative team behind the 2015 CBC docuseries Keeping Canada Alive, which examined Canada’s healthcare workers in a similar fashion. The team wanted to present another series with the same structure, choosing to profile the systems and organizations that protects Canadians.

More than 60 camera crews spread out across the country to shoot Keeping Canada Safe in 34 cities within a 48-hour timeframe. In each case, the production team had no idea what kind of calls would come in and what exactly their crews would be in for. The final product showcases vastly different roles working simultaneously each day in various parts of Canada towards the same end.

“We were looking for those everyday people that help keep Canadians from physical harm,” says Bodnar. “What helps keep us safe, body and soul, from all kinds of things? That ranged from first responders, police, search and rescue to fire. But also to more of those grassroots organizations and people that put themselves on the line to keep their neighbourhoods safe.”

The series shot footage ranging from dramatic coast guard search and rescue missions in the Atlantic Ocean, to more unsung acts of security like a water safety experts in rural Poplar Hill, Ontario, a community with chronic boil water advisories.

Here are some of the teasers CBC gave us of stories from Calgary and Alberta featured in Keeping Canada Safe:

A Calgary police helicopter team uses state-of-the-art technology in an exciting search for the suspected perpetrator of an assault.

Rare access allows viewers to ride along on the tension-filled day of two Calgary sheriffs as they transport prisoners, including dangerous gang members, for their day in court.

A Commercial Vehicle Inspection Officer engages in high-speed pursuit of a truck on an Alberta highway-and finds trouble with his load.

Canadian Forces fighter jet pilots in Cold Lake engage in a thrilling mid-air dogfight to test their response in the event of enemy attack.

A Calgary firearms examiner conducts forensic tests on a sawed-off shotgun to see if it has been used in a homicide under investigation.