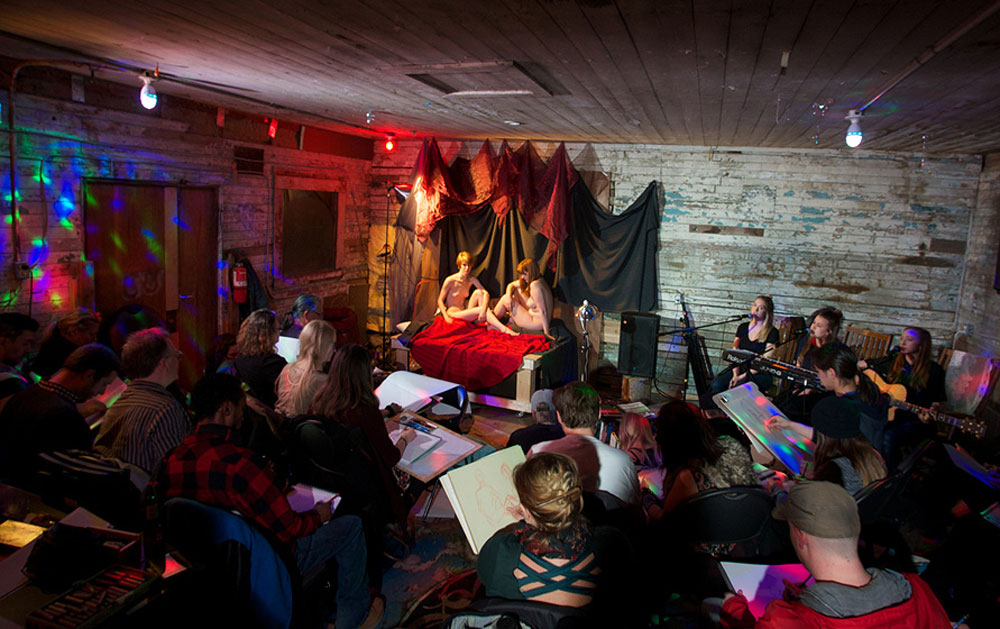 One June evening in 2013, Desere Pressey hosted a small studio-warming party upstairs from a granite showroom just east of Macleod Trail. Pressey, a painter, invited four artist friends to a small nude-figure drawing session, hoping the event would help her feel at home in her new creative space.

To set the mood, she placed more than 300 candles on the stairs and invited a harpist, and, when the model arrived, the artists painted in near-darkness. “It was like a ceremony, almost,” Pressey says. “It was beautiful for me, and then the natural question was, ‘When is the next one?’ ”

Three years later, Pressey still works in that studio, and Off-Beat Figure Drawing Sessions – extensions of that first gathering – have become a fixture on the Calgary arts calendar. Sessions happen at odd and intriguing venues around the city, including a former slaughterhouse, Voltage Creative Garage and even the Body Worlds Vital exhibition at Telus Spark.

At Pressey’s events, models engage with each other in pairs and groups (at the Telus Spark session, the largest by far, there were no fewer than 10 models), musicians play, guest photographers snap and poets perform. The venue is always carefully decorated, and often deliberately theatrical.

By contrast, traditional figure drawing sessions typically happen in sparse, well-lit studios with experienced solo models and silent artists. “Generally, there’s not a lot of talking,” says Pressey, who describes such sessions as “clinical.” “There are no other art forms in the room.”

Pressey chooses session themes like “Moonlight” and “Bohemia,” borrows props such as crystals, vintage windows and crocodile heads from her set-designer studio landlord and sometimes collaborates with installation artists to create striking and atmospheric environments. Session participants appreciate the attention to detail and the casual, cozy vibe; some describe the experience as “sacred.”

Pressey says she always wanted to shake things up, open up the community and facilitate a deeper conversation between artists and patrons. “How can I open the door to people who’ve never drawn before or modelled before?” Pressey wondered. “How can I take the gallery wall away so that the process becomes more accessible to everybody?”

Pressey is herself a relatively new member of Calgary’s artistic community. After a career in the home-renovation industry, she walked away from a position at a promising social media marketing start-up and surprised herself by announcing she was going to paint.

That was nearly five years ago. Today, Pressey is a respected painter and a guest curator for the Gerry Thomas Gallery, supplementing her commissions with part-time work as a companion for the elderly.

Artists tend to see each other at gallery shows and openings, then shut their doors and work alone in their studios. Pressey believes the Off-Beat Figure Drawing Sessions provide a more collaborative art-making experience, where people feel artistically inspired and connected to each other.

“There is a way to gather in community, with creativity being your tether, and have that be more of an emotional experience,” she says. To Pressey, the sessions themselves are works of art.

Off-Beat Figure Drawing Sessions welcome new participants, both artists and models. Sessions are usually limited to about 30 people. Find out how to participate at offbeatfiguredrawing.com.

Inside an Off-Beat Figure Drawing session.

[Correction: In a previous version of this article, we incorrectly wrote that Desere Pressey is a guest curator for the Christine Klassen gallery. She is not, and has never been, a curator at this gallery. She was also incorrectly credited with being the founder of Gorilla House, which she is not.]