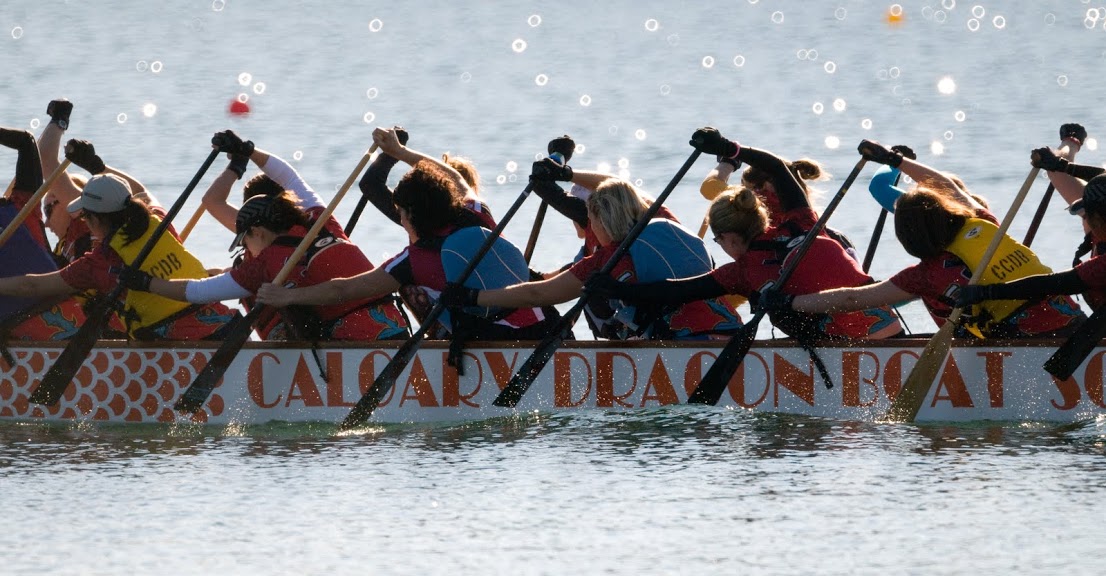 If you’ve never seen a dragon boat race before, this weekend is your chance to cheer on the competitors and think about getting involved in the Calgary Dragon Boat Race next year. For those who didn’t know, this isn’t just a weekend of racing: there’s also a cultural festival. This year’s festival includes a stage with cultural entertainment and bands, beer gardens in the afternoon, food trucks, and new this year, a farmers’ market.

Shane Martin, the co-chair of the Calgary Dragon Boat Society, shared some little-known information about the origin of the sport in Calgary and why Calgarians should consider paddling.

When did dragon boating come to Calgary?

Dragon boating came to Calgary roughly 20 years ago and the Calgary Dragon Boat Race and Festival first took off in the early 1990s. “The sport took off in Canada in general after the 1986 Expo in Vancouver,” says Martin. “Several dragon boats were donated to different Canadian cities, which really launched the sport here.”

When a group of dragon boating enthusiasts brought the sport to Calgary in the early ’90s, the inaugural Calgary Dragon Boat Festival had just 10 teams participating. This year, there are 60 teams registered and the number of people expected to be on-site is incredible: “We’re expecting anywhere from 3,000 to 5,000 people this weekend, including spectators,” says Martin.

How does the sport work?

The competition is straightforward. There are 20 people in one dragon boat, which includes a drummer in the front of the boat to keep all the paddlers in time and a person responsible for steering in the back; it’s their job to make sure the boat travels in a straight line.

The race is just 500 metres, which takes anywhere from 2 minutes to 2 and a half minutes to finish. Successful teams will advance through the heats to the finals. And don’t expect underdog wins: Martin says that in the sport of dragon boating, practice makes a huge difference. “It’s usually the same few teams in the final, which will be exciting this year,” says Martin. “There are 3 national contenders coming in from Edmonton and Regina. These are serious athletes hoping to advance to the international qualifiers.”

Who participates in dragon boating?

“It’s an anyone and everyone kind of sport,” says Martin. This weekend, expect to see teams of weekend warriors and corporate teams that use dragon boating as a teambuilding event. These teams might just paddle together twice before the festival. On the other end of the spectrum, there are serious athletes who practice outside from May to October and train in the gym during the off-season.

A team of breast cancer survivors paddle at Glenmore Reservoir.

Simply, no. Martin has been involved in the sport for 14 years and has only seen a dragon boat tip twice. That being said, one of those boats was at last year’s festival. “Everyone who fell out of the boat was safe, smiling and having fun,” says Martin. “There are worse times of year to fall into the Glenbow Reservoir.”

Why get involved in the sport?

The Glenmore Reservoir is a picturesque setting for a paddle.

“Dragon boating is a social sport,” says Martin. “You’re with 19 other friends, you’re in a beautiful environment and you’re enjoying a summer evening on the water. And, of course, there’s the fitness aspect too.”